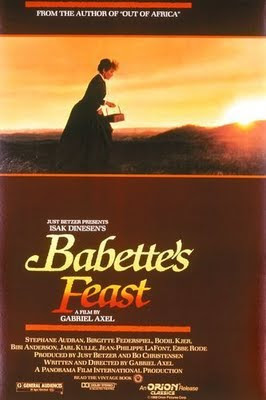 Foreign language oscar winning film from 1987. Based on the story by Danish author Karen Blixen. With the surge in interest in Blixen during the mid 80s due to the film adaptation of her book Out of Africa, its understandable why they made Babette's feast soon after.

The film is a time capsule, showing us what it was like to live in Scandinavia in the late 1800s. The point of view is from the parish. For this reason, it was tough for me to identify with the characters. Perceived today, the two sisters Philippa and Martine seem smug and behave like nuns in denial. On the other hand, in those days the sister's were no doubt role models of righteousness, good-hearted non-sinners. Their background with a father as a priest means they feel obliged to live a holy life without getting married. A problem probably lies in that they are unable to see a world outside of their own devout Christian upbringing. Faith is all that matters in their daily life. If they are attracted to a man, they brush the feeling off, thinking its shameful and a sin to take it beyond friendship. The story sheds light on the limitations of such a chaste life, and questions blind and all-encompassing devotion to the bible and a collective suppression of individuality. 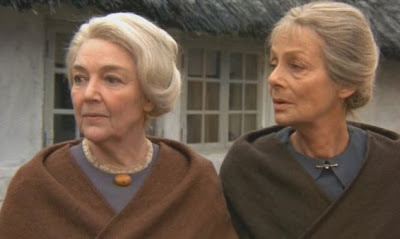 We see the sisters at different stages of their life. They appear afraid or unable to deal with their own feelings, frightened of change. In essence, the community are robbing themselves of new experiences. Perhaps it's insecurity, afraid to be independent people, blindly taking over their father's philosophy of life. The sisters outwardly are content with status quo. Perhaps Philippa and Martine think their destiny in this world is to honour their father by continuing his church work.

Even when the priest dies, the community still follow his example. The material world is an illusion, true reality for them is a heavenly place. In order to be accepted in paradise, the sisters behave in a restrained manner, they don't believe they can achieve actual happiness during their lifetime. The film is based on fact and a depiction of the times, refraining from drinking was a method to control drunkards.

The book was controversial in its time, and Karen Blixen wrote under the pseudonym Isak Dinesen. Having travelled to Africa as a young woman, Blixen could observe Scandinavia from a different point of view on her return, and see the disadvantages of living such a controlled life, where all pleasure is rejected. Then again, there is no way of knowing if the sister's in fact would have had a happier life away from the small town?

For me, the highlight of the film is the preparation and eating of the feast, which is to celebrate the 100 year anniversary of when the priest was born. The way the scenes were shot, the food becomes something magical. I actually read the novella/short story, and the words Blixen uses to describe the meal likewise elevates it into something extraordinary, almost divine. The community enjoy the delicious food, they have never experienced such a magnificent meal before, and maybe never will again, knowing their behaviour. Perhaps the expensive food tastes even better, because they are telling stories to each other as well. Its fun to watch them getting drunk, and repressed feelings come to the surface during conversation, for better or worse. Watching all these tasty dishes I really began to feel quite hungry ( : 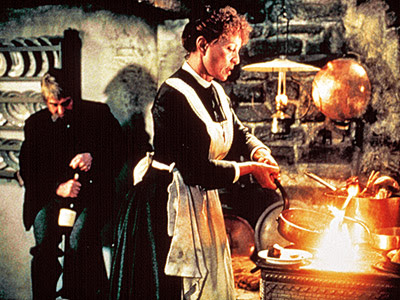 Since the sisters don't want to travel, travellers who visit the community are a form of stimulation for them.
Babette is an outsider, the cook, perhaps the opposite of the two sisters, Babette views herself as an artist, wanting to realize her potential, cooking is her identity. Ironically, the aristocrats who are her enemies from the past, are the only ones who can truly appreciate her special meal. You probably can't distinguish between Babette's desire to thank Philippa and Martine for letting Babette stay at their house, and Babette's selfish need to express herself through her cooking. Anyhow, her artistic longings benefit everyone positively, irrespective if it's a self-serving agenda or not. For a few hours, Babette takes over the priest's role in the community, the unifier gathering everyone together. 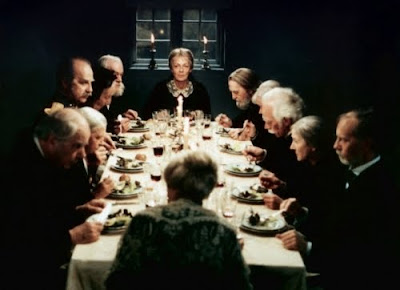 Several things point towards Babette being the author Karen Blixen in disguise, the individual who creates something beautiful, which can be enjoyed by friends or foes. Blixen wrote stories to be enjoyed, likewise, Babette cooked a feast to stir the senses. Karen Blixen was a woman of the world, who returned to Denmark and could perceive her home country with a fresh pair of eyes.
Similarly, Babette is a foreigner from Paris, she wants to introduce the community to something exciting and new, which they otherwise would never have encountered without her help. 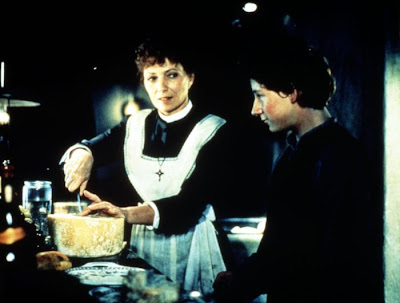 The message of the film I think is that we can have faith, but also at the same time enjoy our years on this planet. It can be rewarding and liberating to rebel against conventions, new people can push you into new experiences, but being a renegade can also be alienating. Perhaps through art and our senses we can get a glimpse of something beyond our material existence. I think Blixen is hinting, why shouldn't we enjoy all that nature has to offer, animals, fruit and vegetables?

A minor critique is the running time of the film, it could easily have been shorter. Suitable for watching at Christmas time, even though its actually got nothing to do with xmas.

Readers, any thoughts on Babette's feast?