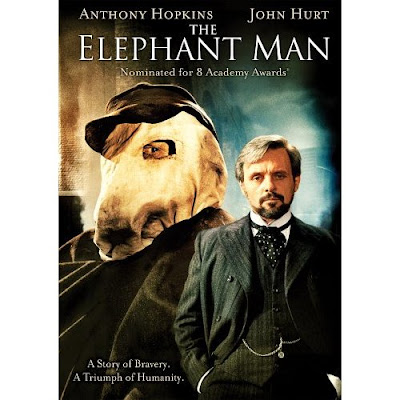 A moving story that can bring a tear to your eye about a deformed 21-year-old man, who escapes the circus. He must deal with constant prejudice and rejection because of his looks.

Among other things, the film is about how we focus so much on appearance and it determines how we perceive other people. You can be deformed and ugly, but have a heart of gold. There could be some truth to the theory that ugly people try and have a likeable and friendly personality, because they are unable to charm people with their looks. In a way, it’s a more honest way of charming someone you meet I think. 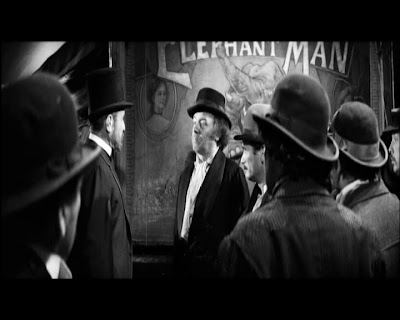 Based on a true story about a man from London who probably suffered with a condition called neurofibromatosis, which results in cauliflower shaped deformities on your body. It hasn’t been confirmed exactly what disease he was suffering from according to the documentary on the dvd, there have been attempts to extract dna from Merrick’s remains.

The film suggests Merrick fell in with the freak show crowd against his will, in reality, he had hopes they might accept him as a showpiece and thereby give him a means of earning a living.

John Merrick believed his deformity to have been caused by the shock his pregnant mother suffered after being frightened by an elephant. The discovery that his mother and younger sister were crippled however supports the argument for a genetic defect. 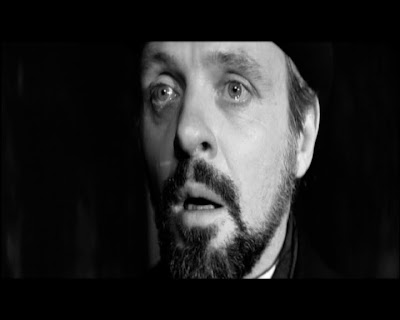 The story is also about exploitation, taking advantage of “the freak” at a circus, or to advance your career as a doctor, or as a member of the upper class, who want to mould him into their image. Treves lets us into Merrick's world, the one that no one saw because his appearance was too frightening.

The scene where John Merrick is at the theatre is powerful, for the first time he is part of the audience instead of being the subject of horror. He is treated with respect and as an equal citizen. But we realize this is just a brief moment of happiness, he can never escape the monster he is.

You can certainly argue that comparisons can be made to the film Freaks (1932), about some deformed humans who perform in a circus environment like animals, but make an escape. 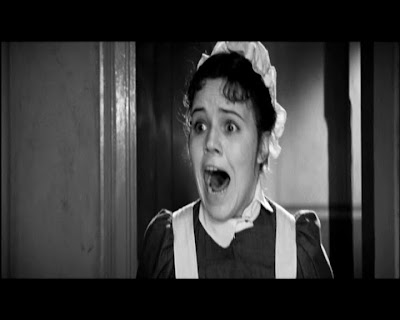 You get the feeling it’s the people around John Merrick and their reception and fear of him, that have made him into a monster, not himself. Inside he seems normal. He is the most sympathetic character. People are often afraid of the unknown and what they don’t understand, and that which they have a lack of knowledge of. Eyes are always on John Merrick, he is constantly the center of attention wherever he goes, and this must be bothersome for him, he can never just blend into the crowd, and never had a choice about being a freak. We are made to feel sorry for him. The theme of voyeurism is something Lynch would later explore in Blue Velvet (1986)

Favourite quote: “my life is full, because I know I am loved” 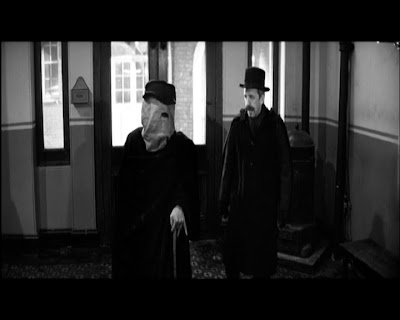 In the book The Complete Lynch, John Merrick is compared to Victor Hugo’s hunchback, a romantic hero, a beauty trapped in the body of a beast, a monster who teaches those he meets how to be human. As billsmovieemporium writes in his review: humanity that can’t accept him are the real freaks.

According to blogger friend Steve in his review at 1001plus, rumour has it that the make-up didn't look very good in colour, so David Lynch decided the film should be shot in black and white.

I think this was a wise decision, not least because to me b/w transports us into the past, much like director David Lean in 1946 managed to create the atmosphere of the 1800s in Dickens' Great Expectations.

Spoilers ahead. The ending to me is interesting, Can you only be true to yourself by being abnormal? What is normal anyway, and is it desirable to be like others? John Merrick’s death is a tragedy I think, because he was such a lovely person inside, if anything, other people should have tried to emulate his gentle behaviour, rather than him trying to fit in with there’s. In a way, I think John Merrick was weak at the end, he didn’t go on fighting, perhaps because it was too painful being regarded as a freak. Although, you could also interpret his suicide as a wise decision, if he could only imagine the rest of his life being unhappy. So the suicide was perhaps his only way out, he believed he would join his mother in heaven, so maybe this would be a happier place for him. As Lynch himself says in scene by scene interview 1999 with Mark Cousins on youtube, the shot of the stars indicates that many things remain, it’s just the body that’s dropped. People’s memory of you remains, and your achievements in life.

I think the overall message is not to judge someone too quickly by his or her appearance, but take the time to understand someone’s actions and words. But I couldn’t help thinking if John Merrick had been given an unpleasant personality in the film, then nobody would want to watch, this is what makes it Lynch’s most mainstream film in my mind, the character’s flaws are not addressed. As Roger Ebert suggests, a little sentimental by being emotionally manipulating. That being said, the film can change the way we see ourselves and other people.

Readers, any thoughts on The Elephant Man ?
Posted by Chris at Monday, June 20, 2011