Morality Bites blogathon Do filmmakers have a moral responsibility? 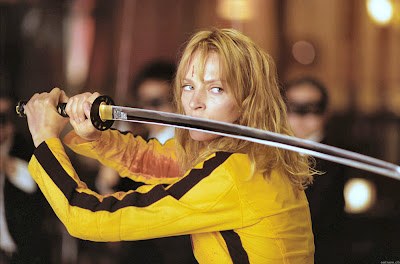 This particular post is part of the Morality Bites blogathon over at Filmplicity and DWC and concerns the question “Do filmmakers have a moral responsibility?”

When it comes to what I call glorified violence in films such as Kill Bill and Reservoir Dogs, making it cool to kill and swear, then I begin to take a step back. How can you argue in favour of making such films were there is apparently no surface message other than entertainment?

I respect films such as Clockwork Orange and Fight Club, because I sense Kubrick and Fincher had a reason for displaying the violence, dealing with issues of how to handle criminals or male aggression. Sadly all I can see in above mentioned Tarantino films is violence for the sake of some morbid pleasure. The thing is, no matter if the director has sincere intentions or not, the film can be misinterpreted by the audience just the same, and that is a problem. If just one man goes out and cuts someone’s ear off for fun like in Reservoir Dogs, then Tarantino is at fault, has Quentin even thought of the consequences you wonder? And Fight Clubs emerging, is Fincher to blame? 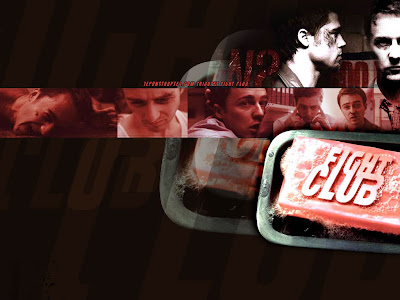 Although even a comic, or an innocent cowboys and Indians flick can make a boy take his fathers gun and shoot someone, it’s a tricky situation in accusing the artist, because you never really know whereabouts the culprit got his inspiration from, so this is also a problem, the artist is kind of artistically immune. And this to a certain degree means they can direct any story they want.

I guess anything goes in art, and the more extreme one artist is, the further the bar is pushed for the next generation of directors and audiences. I confess I enjoyed the dialogue in Pulp Fiction, so I’m guilty too.

Would the world be a less violent place without movies and video games is a hypothetical question, or do we simply have a natural inclination for destruction? Do we watch horror films like Saw, so we can mentally live out a fantasy, so we don’t have the urge to do so in real life? And is film therapeutic in some way.

I heard director David Lynch comment:
“But now violence has reached an absurd stage where you just don’t feel it any more. And there’s no way now you can swear more in movies. It’s like there’s a wall there – a numb sort of thing” (Lynch on Lynch, page 249)

The rating system of not allowing children to watch excessive swearing, sex and violence obviously is a method of protecting our kids, but does that mean all adults can just waltz into a dvd store and rent anything. Should there be limitations on what over 18s are allowed to watch, is the choice of saying yes or no to movies enough? Should there be a warning for adults on the dvd? 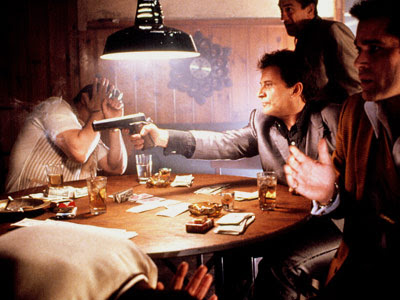 I know if I was a director, I would never in a million years direct scenes that included violence and swearing just to be hip and “street” for the sake of realism. While I can appreciate Goodfellas is well-acted with a good story, I disliked the profanity and violence, and can’t understand why it gets so much love. I believe at the time it had the highest number of F-profanities in film history, is that something to admire? When violence/swearing becomes cool, I think cinema is heading in the wrong direction.
Having said that, I think directors should make movies that they want to make, there shouldn’t be limitations on art. I just choose to turn off stuff like Kill Bill, as it really makes no sense to me, and I don’t know what Tarantino is trying to achieve?

Let me know what you think in the comments.

Want to join the blogathon and write your own answer to the question: Do filmmakers have a moral responsibility? Details over at Filmplicity
Posted by Chris at Thursday, June 30, 2011

Email ThisBlogThis!Share to TwitterShare to FacebookShare to Pinterest
Labels: Morality Bites blogathon Do filmmakers have a moral responsibility?