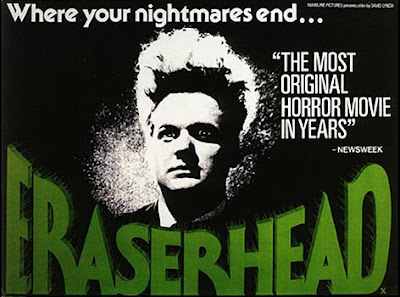 This review is my contribution to the LAMB David Lynch director's chair event June 17th. I will post several more David Lynch film reviews in the next few weeks, as he's one of my favourite directors.

When people talk about the great films of the 1970s, it’s my feeling Eraserhead often gets forgotten in that conversation. Arguably director David Lynch’s most personal and mysterious film. Rich with symbolism, and creepy to watch.

A black and white surrealistic nightmare. Acknowledged as the full-length movie debut by director David Lynch. Technically brillant when you consider the budget.

Henry Spencer is the main character, a young man with unusually tall hair. The line between reality and fiction, and living and dead is blurred. The whole thing might be going on in the main character Henry’s head. 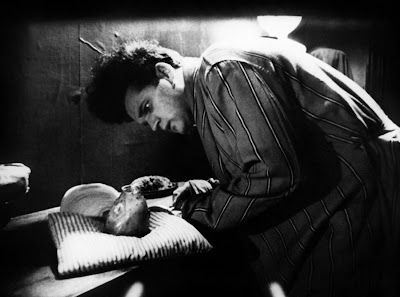 The responsibility of having a baby is clearly a theme, and the anxiety that this can bring with it. Almost as if Henry is seeking an escape from sexuality. Also a guilt of impregnating a woman seems to linger. The dream of escape is Henry’s ambition, which also the title implies, to “erase” himself from his current situation. One of the metaphors of the film is the pencil eraser factory.

I heard Lynch talk in an interview that the atmosphere is based on a period of time he lived in Philadelphia, and he experienced the city as “a sick twisted and decaying place, like living in a small cloud of fear, but it was where I had my first original thought I think.” The city had similar factories that feature in the film. Henry moves around in this world in Eraserhead like a tortured young man being followed, things are too claustrophobic in his room, and too overwhelming outside. The world is a strange place for Henry. Nature seems to have vanished, a picture of a mushroom cloud hangs by Henry’s bed. Chaos is everywhere apart from the dreamlike lady in the radiator, who is a comfort for Henry. The distance between outer and inner is blurred. Henry appears to be attempting to hide from his sexuality and return to a time of innocence, but is this possible as an adult?

Difficult to know what to believe, which adds to the fascination. Is it a dream, and if so, who’s dream? If it is a dream, then there are dreams in the dream, because Henry dreams of the lady in the radiator. Likewise what we usually understand as time is distorted, the baby is born so early, and doesn’t look human. From who’s point of view are we observing the events is also weird based on the opening where we see Henry in a kind of weightless situation.

David Lynch interview on Eraserhead: "Eraserhead doesn't take place in any known city. It's on the fringes sort of on a city, and it's people who live in industrial where after 5 o'clock there's nobody around. These people are of a certain type, like Henry and Mary, they've got caught in the past, they live in their own time, and there's not a whole lot happening that is normal. A netherworld" 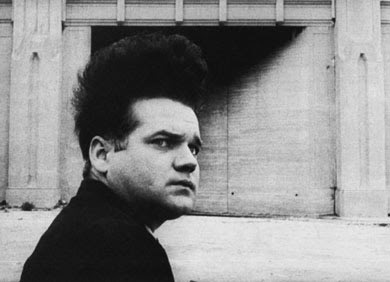 Pretty obvious that Henry is the alter ego of David Lynch with the hair sticking up in the air.
It took around five years to make Eraserhead, they had very little money, and at one point Lynch even has to get a job as a paperboy delivering the wall street journal. crew members had jobs while the shooting went on.

Part of the uniqueness of Eraserhead is that doesn’t fit easily into any category, perhaps being a Lynch film is the only way to categorize a cult film of this nature.

The music is very unusual and adds to the mood, unlike anything I’ve ever heard in film. They opted for an industrial sound, which pretty much is in the background all the way through. The filmmakers stumbled upon the sound by accident while fiddling around with some sound equipment. Lynch on the music: “I’m real fascinated by presences – what you call ‘room tone’. It’s the sound that you hear when there’s silence, in between words or sentences” (Lynch on Lynch, page 72-73)

Lynch was just coming to terms with the unplanned birth of his daughter, Jennifer, in April, 1968.
Jennifer feels that too much has been made between Eraserheads deformed baby and the fact that she was born with club feet. But she does think it was influential. In the interview book 'Lynch on Lynch', David Lynch talks Eraserhead, and that it’s a world neither here nor there. To some extent the film is autobiographical, as Lynch became a reluctant art school father, when he had his daughter Jennifer, and a year into the shooting of Eraserhead, he split from his partner Peggy.

Some have interpreted the film in a religious way, the mother of the baby is called Mary, and if she was not impregnated by Henry, then could the baby perhaps be the son of god?

I love the title Eraserhead, it refers to the dream of the eraser factory in the movie, and wanting to erase certain things in you life. The baby is something Henry wishes he could erase, but can’t. Does Henry want to erase himself and live in a fantasy with the lady in the radiator? 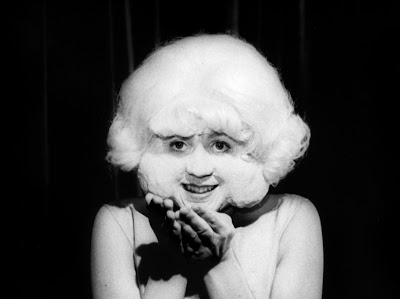 Everything around Henry seems dark and strange, and he longs for this sort of clean, pure childhood image before all this happened. Lynch drew the lady in the radiator during the production : “And I thought she would live in the radiator, where it’s nice and warm, and this would be a real comfort for Henry” (the complete Lynch, page 21).
Lynch: “The Lady in the radiator had bad skin. I think she had bad acne as a child (...) But inside is where the happiness in her comes from. Her outward appearance is not the thing” (Lynch on Lynch, page 66).

The movie found its niche as part of the late-night circuit, one of the so-called midnight movies. It played 17 cities regularly once a week for 4 years, but the poster was up all week, so it became a known item.

In my mind, an unforgettable and highly atmospheric film, which invites to discussion. Perhaps the intention by Lynch was for the film never to be fully understood ( :


Readers, any thoughts on Eraserhead?