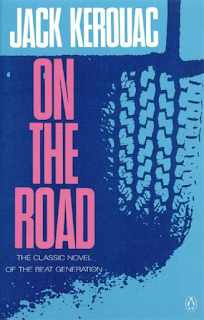 I’ve attempted to write the review with no major spoilers.

About being young, restless and searching for adventure. The journey sometimes more important than the destination, hitchhiking and meeting people on the road, giving the narrator (who is a writer) lots of experiences and people to write about. A time capsule to a particular period in the 1950s. In the novel, Kerouac defined a new rebellious, counter-culture generation known as the beat generation. The media buzz surrounding the book sent countless kids on the road.

Sal Paradise narrates the story, he is friends with unpredictable Dean Moriarty. To some extent both of them are drifting around America, sowing their wild oats. The book is an autobiographical account of the author's own life. Fearing libel suits, Kerouac and the pubishers changed the names to pseudonyms.
Viking Press demanded major revisions prior to publication, and many of the more sexually explicit passages were removed. I read the original novel from 1957, but there is also a longer unabridged scroll version, which was written in 1951 and was released in the 2000s. The scroll is essentially nonfiction, a memoir that uses real names. 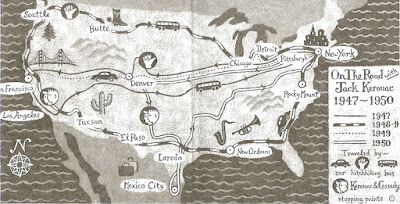 At first Sal hitchhikes by himself. Later he journeys with Dean and others. They are always running away from problems, or seeking something new. Not dwelling very long. In some respects this short attention span mirrors today's youth culture. Sal reflects on page 113: “I like too many things and get all confused and hung-up running from one falling star to another till I drop. This is the night, what it does to you. I had nothing to offer anybody except my own confusion.”

You could argue what they are doing lacks purpose. Saying yes to plenty but not really committing to anything serious. Perhaps the reason they keep moving is because staying in the same place they would become bored and realize what they are doing is futile, partying, going to bars, stealing cars, having random sexual encounters, doing drugs, etc.
Old Bull (aka Old William S. Burroughs) on page 131 asks them why they travel and they have no answer. Page 121: “We were all delighted, we all realized we were leaving confusion and nonsense behind and performing our one and noble function, move. And we moved!”
On page 105 Sal says: “This can’t go on all the time – all this franticness and jumping around. We’ve got to go someplace, find something”. A journey of self-discovery. As a critic noted, the characters are "replacing the ladder of success with the freedom of the road as primary measures of male identity."

Ann Charters writes in the introduction that Sal’s point of view is comparable to that of Nick Carraway, who befriended and observed Jay Gatsby. Page 120: “Dean had every right to die the sweet deaths of complete love of his Marylou. I didn’t want to interfere, I just wanted to follow”
Kerouac has admitted he studied The Great Gatsby (1925), and it "had shown him the value of inventing a sympathetic narrator to tell the story of an American hero who fled his past to embrace what he imagined was the freedom of his future."

Acquaintances tell Dean he is irresponsible and has “absolutely no regard for anybody but yourself and your damned kicks”(page 176). Sal knows Dean and Marylou are getting him into all sorts of trouble, but some friends are better than no friends, and Sal misses the excitement when he is alone. Dean (real name Neal Cassady) was beloved for his ability to inspire others to love life. 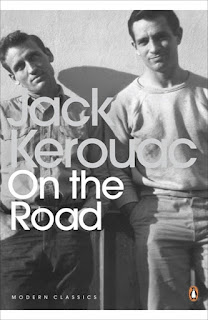 I didn’t jot down all the references to music, except the song Sweet Adeline. To be honest the passages about listening to jazz bands I didn’t find that interesting. I guess it was more fun to have been there than to read about. Ann Charters describes jazz in the introduction as "symbolizing the source of American freedom and creativity. Like Dean, Sal is passionately immersed in jazz, an ardent admirer of Billie Holliday, Slim Gaillard, George Shearing, Lester Young"

In one of my favorite sections (part 1, chapter, 11, page 53-71), Sal goes to San Francisco. Here his friend Remi Boncoeur helps Sal get a job at a barracks. The events really comes to life and the situations are memorable. It’s quite different to the rest of the book, as it doesn’t take place on the road.

Another favorite passage of mine (part 3, chapter 8 and 9, page 203-216) takes place on the road, a fast-paced trip in a Cadillac limousine from Denver to Chicago. It’s undeniably thrilling, told in a way so I couldn’t stop reading.

The book seems to endorse the reckless and impulsive “on the road”  lifestyle as a method to gain experience and live life to the fullest, yet also acknowledges living that way can be hurtful to those you are irresponsible towards.

Today considered a classic. The Modern Library ranked On the Road 55th on its list of the 100 best English-language novels of the 20th century.

Agree or disagree? Have you read On The Road?