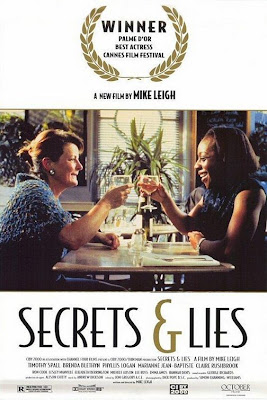 Won Palme d'Or at Cannes, and received Five Academy Award nominations. The film is pretty self-explanatory, although this can fool you, there are layers to the story, if you look closely.

A kitchen sink drama, a slice of life story set in London about a family and their troubles, such strong and realistic dialogue and impressive acting. While some may find her character irritating, Brenda Blethyn won the award for Best Actress at the 1996 Cannes Film Festival.

I find it interesting that Cynthia (Brenda Blethyn) feels closer to her friend Hortense, whom she has just met, than her own family, whom she has known for years. Sometimes it’s easier to make a fresh start, where people don’t have previous knowledge of you. Cynthia is lonely, and seems to be fading fast, and heading towards a nervous breakdown, her brother has neglected to keep her spirits up over the previous year, but she has also not rung him either, so she’s not blameless. Hortense has just lost her mother, so the circumstances are ideal for the two women to strike up a new friendship, they both give each other the guide to go on living. 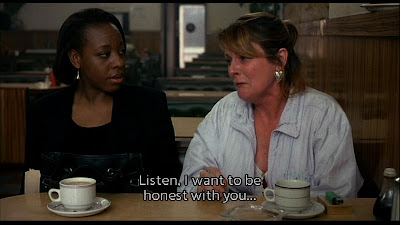 The photographer Maurice (Timothy Spall) must not only worry about his sister Cynthia, but also doubts whether his wife still loves him, and even at work he has to brighten the mood of his customers. No one is giving HIM any support, so he shows character by soldiering on even when he is under pressure from all sides. He is probably the mentally strongest of the bunch, and is in a way holding the family together.

At times, for me at least, it can be tough to watch the suffering these characters are enduring, they really crept under my skin, and I couldn’t help feeling sorry for them. Especially the grumpy daughter’s cold behaviour towards her unhappy mother Cynthia is sort of a statement I think Mike Leigh is making about how NOT to treat your parent. Rather than help one another, each suffers alone. Both Roxanne and Cynthia being in boring dead-end jobs probably adds to their frustration with life, although you could argue that Roxanne is content with being a garbage collector, or simply unsure about her future and biding time. One could say Roxanne doesn’t know any better, and feels like she can say whatever she likes without her mother ever leaving her. This is a problem I see with a child-parent relationship, parents can get bashed and what to do then? Stop loving your child is not really an option. One of my favourite novels What I loved by Siri Hustvedt deals with this very topic about a hostile child and how this can be tough for parents.

While watching, the film also has the effect of making the viewer consider their own family dynamics, what secrets and lies are right in front of you in your own homes? 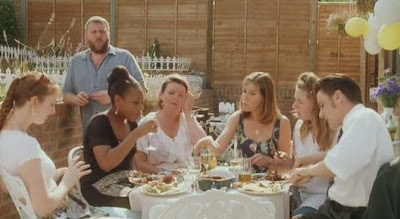 Having just rewatched this earlier masterpiece, in a lot of ways, Secrets & Lies resembles Mike Leigh’s latest screen effort Another Year (2010). The vulnerable Cynthia character desperate for attention and affection is comparable to Mary (Lesley Manville), the loser ghost from the past outside the photographer shop and the awkwardness of having to deal with him feels like one of those dysfunctional friends Tom and Gerri had coming round to visit, there are family gatherings in both stories like in the photo above. Not that the similarities are a bad thing, as the stories and dialogue are vastly different.

A bit of trivia:Although Leigh is credited with writing the screenplay, most of the performances were improvised: Leigh told each of the actors about their roles, and let them create their own lines.

For me, Secrets & Lies is a depiction of how we reveal ourselves, and try and cope through hard times, how we rely on other people’s love or encouragement to get us through the day. I think it easily holds up to repeat viewing every five years or so.

Readers, any thoughts on Secrets & Lies?