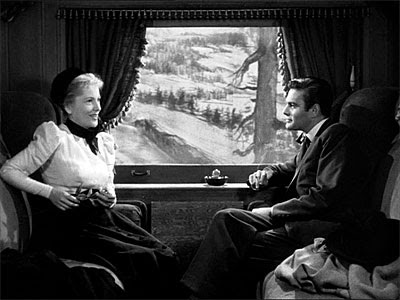 One of my all time favourite black and whites. Based on a story written by Stefan Zweig, who is an acclaimed author. This is one of the most romantic films, I have ever seen. I rate this 9/10.

'Before sunrise' may be a homage to this film and other Max Ophuls movies with train scenes, ferris wheel, and a couple in Vienna.
Ophuls used Vienna in other films he made called 'La Ronde' and 'Liebelei'. I think 'Before sunrise' and 'Before sunset' directed by Richard Linklater have better scripts, but LFAUW comes close to equalling the magical atmosphere and setting in Linklater's two films. Another similar movie I remember is 'Portrait of Jennie', which is also from 1948.

The music and Joan Fontaine's and Louis Jourdan's voices and performances in LFAUW are very memorable. Everything seems to work.

It’s not just a simple love story, this film has a few twists and a good script like 'Casablanca' also has. It’s best not to know anything about the story before you watch.

Some may not recognize French actor Louis Jourdan, who in 1983 was a bond villain. This type of romantic part is more suitable for him, I think, and he became slightly typcast over the years. Even though he does look a bit like an evil weasel in Octopussy! Ha ha ( :

I thought Max Ophuls' 'La Ronde' was good, but to me lacked the magic of LFAUW. 'La Ronde' was similar to 'Magnolia', but not as good as that ensemble film.

You can read a ‘making of’ in google books, if you perform a google search on: Letter from an unknown woman.

Email ThisBlogThis!Share to TwitterShare to FacebookShare to Pinterest
Labels: Black and white films, Film review, Letter from an unknown woman