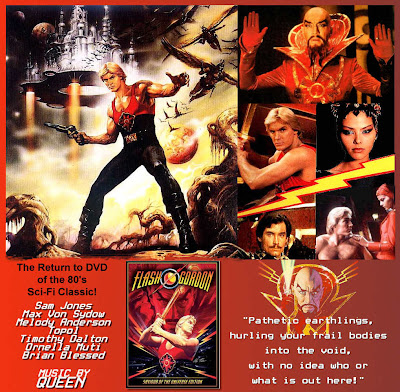 Probably the movie I have seen more than any other. I think I’ve seen it about ten times or more in my life. I rewatched it last year and hadn’t seen it in a long time and enjoyed it once again. It’s very nostalgic to me like many call the old Star wars movies childhood favourites.

I agree with cartoonist Alex Ross on youtube, he points out the special effects look so colourful and like no other superhero movie. He also calls it a rock opera, due to the fusion between the story and Queen rock music. According to Alex Ross, the director intended it to be tongue-in-cheek and not a very serious film. That’s the reason some may label it cheesy. It feels like a world you have never been to before.

If you are not aware of it, the character's are based on a cartoon strip from the 1930s, which became a black/white TV-show, later on several movies followed. It's also been turned into a recent TV-show.

I heard the actor playing Flash actually had his voice removed and dubbed, because the studio didn’t like the way he spoke. He is not a great actor. I wonder what happened to the male and female leads? , I never saw them again in anything else.

Apart from Flash, I thought the rest of the cast of characters are very memorable, especially Ming played by an almost unrecognisable Max von Sydow was pretty scary, but well-picked. Zarkov from 'Fiddler on the roof' and Bond movie 'For your eyes only' is also very believable as the mad scientist.

An underappreciated and underrated 80s movie, which in my opinion ought to rank along side such sci-fi classics as Star Wars.

One to watch multiple times, but probably more when you’re a kid or teenager. But everyone who likes science fiction should watch it, not to be missed.