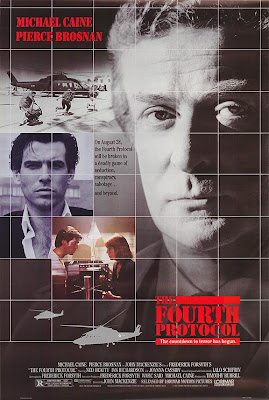 Many movie fans have probably seen or heard of the British spy thriller The Day of the Jackal (1973), which is based on a book by Frederick Forsyth. An in my view inferior and soulless remake 'Jackal' was also made in 1997 starring Bruce Willis and Richard Gere.

The fourth protocol is a screenplay written by the same author Frederick Forsyth based on his novel. It's not so well-known as the above, but is in my opinion underrated and a good movie.

But give the Frederick Forsyth movie The Odessa File (1974) starring Jon Voight a miss, it was really dull. "The dialogues are made of wood", as a guy I agree with on IMDB rather amusingly puts it.

The fourth protocol is similar to a Bond movie, but without Bond in it. The film stars Michael Caine and Pierce Brosnan and is a thriller with agents, spies, gadgets, girls, KGB, Russia conflict and you name it. It doesn’t have so many action scenes as a Bond picture, though, focusing more on a different kind of suspense, which draws you slowly into the story. They obviously had a smaller budget to work with. It almost feels like a TV movie at times, but not in a bad way. 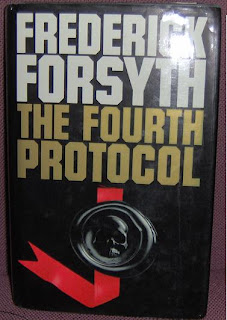 If I had to criticize something, I would say some of the dialogue in the beginning seems unnecessary and isn’t useful to the second part of the film, which has more action. You could almost say it’s like watching two different movies. The plot is a little dated maybe, but still suspenseful, especially the last half. It didn’t bother me they were clearly trying to cash in on being similar to the Bond franchise. The poster is NOT a true reflection of the story!

Let me know your opinion, if you watch/already have watched The Fourth Protocol.

To me, The Fourth Protocol is a good lesser-known 80s movie, which many people probably have never heard of. Definitely worth a watch, if you like these kind of films.

Readers, any other 80s gems I might not have seen, you can recommend?