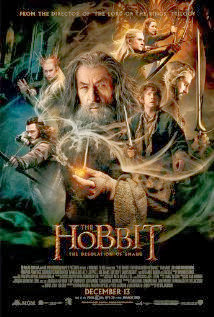 Several of the new films listed missed out on my upcoming top 20 of 2013. Ratings are from 1-10, with 10 the highest score possible.


The Hobbit: The Desolation of Smaug (2013)
Impressive on a technical level, especially the dragon scenes, the empty wine barrel chase, and the grand scale of Esgaroth(Lake-town).
It’s unnecessarily long, though, and only works if you watch the whole trilogy. So it’s not a stand-alone film.
I actually thought The Hobbit: An Unexpected Journey (2012) was slightly more entertaining, maybe because I hadn’t been to Middle Earth for a long time. Desolation of Smaug was a bit predictable.
Rating 6.5


Wadjda (2012)
The Saudi Arabian entry to the 2014 Academy Awards. Wadjda, an 11-year-old Saudi girl living in the capital Riyadh, dreams of owning a green bicycle. The story is too slight to warrant a 90 min running time. Maybe a short film would have been more appropriate. I was bored by it. The performances are alright.
Notable for being the first feature film shot entirely in Saudi Arabia, and is the first feature-length film made by a female Saudi director.
Rating 5.0


Museum Hours (2012)
The movie lost its way in the middle part, but the beginning and ending I was hooked. There are several perceptive observations about museums and museum visitors.
Favorite quote: ”Or more accurately, things standing in for money. I guess this is what he learned at university. He said this was clearest in Dutch still lives, which were essentially just piled up possessions of the newly rich of that time. He said these were no different than if someone today were to paint a pile of Rolex watches, champagne bottles, and flat-screen TV’s. That they were the rap star videos of their day. And he said they were only less subtle versions of all the other commodities the museum was hoarding, and this was now just part of the way things were disguised in the time of late Capitalism. He didn’t hold it against the museum, but he went on like that”
Rating 7.0


Bullhead (2011)
Belgian drama nominated for foreign language Oscar in 2012, but lost to A Separation. A violent and lonely man (Matthias Schoenaerts from Rust & Bone) tries to find love. I certainly felt sorry for him, especially for what happened to him as a child, and how that affected his whole life. The ending was a bit frustrating, and felt unfinished.
Rating 7.5


I Killed My Mother (2009)
Semi-autobiographical, with the director Xavier Dolan playing the main character. A confused, moody 16-year-old son doesn’t get along with his mother, they have a complicated relationship, he loves her one moment, seems to hate her the next. For him, it is not the love of a son. He feels they have nothing in common, and that there are 100 people he knows that he loves more than her. Yet, if someone hurt her, he would kill that person. Says to teacher, that maybe God has given him the wrong mother.
Favorite quote: “In this life you should only wish your inner enemy dead. Restrain him in art. Are we good artists?”
Rating 7.2


The Life and Death of Peter Sellers (2004)
Great performance by Geoffrey Rush, as Peter Sellers. I didn’t realize Sellers' off screen life was so turbulent.
Rating 7.5


The Dreamlife of Angels (1998)
French drama. I liked the friendship we see, even though the blond is making stupid decisions. I wonder sometimes when characters are supposedly without money or a roof to sleep under, why they don’t just go on the dole, but it does have excellent performances.
Favorite quote: “I’m not the type to get attached to guys, they get on my nerves in no time”
Rating 7.8


Lorenzo’s Oil (1992)
Powerful, well-acted drama. I always thought it was about an oil rig, which it definitely is not! The story is about two parents (Nick Nolte & Susan Sarandon) in search for a cure for their sick son.
Rating 7.8


Road House (1989)
It’s entertaining all the way through, but pretty contrived that his old pal shows up EXACTLY when he needs bailing out at the back of the bar.
Big parts of the movie are clichéd, and the acting is below average, yet it does work, in a so-bad-its-good way.
Favorite quote: "People who really want to have a good time won't come to a slaughterhouse. And we've got entirely too many troublemakers here. Too many 40-year-old adolescents, felons, power drinkers and trustees of modern chemistry.
Rating 7.5


Raiders of the Lost Ark (1981)
Rewatch. So many great scenes. Definitely fun from start to finish. The music by John Williams, and the character of Indiana Jones, are iconic. I preferred it when I was a child, though.
Rating 8.5


Network (1976)
Rewatch. A satirical and very loud movie, plenty of yelling. What could be labeled a "realistic Videodrome". Network chronicles corporate greed, and the ethical dilemma of showing sensationalism in the news, to increase ratings, in order to gain profit for stock holders.
In fact, the movie questions what is good television, and questions what the viewers want to see. Also how it can have a psychological effect on news anchors, that their popularity is measured in numbers.
The film could also be viewed as how actors feel, always being provided with lines to read, without having their own opinions heard.
The weakest part of the film could be the romance between Faye Dunaway and William Holden.
Rating 7.7


Weekend (1967)
Directed by Jean Luc Godard. The film has a unique look. There is social commentary, and there is also a lot of car horns and rudeness. The number of accidents seems unrealistic and extreme(kind of like a war zone), but there is a point with it. Perhaps that we are in too much of a hurry in our contemporary society, and therefore are a danger to ourselves and those around us. Or maybe there are other interpretations?
Interestingly the characters at one point say they are tired of being in the film, because people they meet are unhelpful in giving directions.
The second half with all those long monologues was pretty boring really. Preferred the first half.
Turns into a horror film at the end, maybe the whole film was supposed to be horror? I wish the animal cruelty scenes had been cut entirely, I hated those.
Rating 7.3


Zulu (1964)
A long, somewhat boring war movie starring a young Michael Caine, which you can have on in the background, without missing much. Famous for the battle scene which sees the Zulus and English singing before combat.
Rating 5.0


The Bad Sleep Well (1960)
Directed by Akira Kurosawa. The opening wedding sequence is interesting, and the presentation of the cake is a unique moment in cinema. But I’m confused why the families would allow those nosy reporters to be present at the dinner?
Told in a somewhat confusing way, but really is quite a simple story of revenge.
Loosely based om Shakespeare’s Hamlet.
Whistling has seldom been more creepy than in a scene in this film.
It’s quite boring at times, so I can’t really recommend it wholeheartedly. The most memorable scenes are when they lock up the guy and starve him, in order for him to give them valuable information(kind of like in the 2013 movie Prisoners)
Rating 6.4


The Brothers Karamazov (1958)
Difficult to condense a complex 800 page novel into a 2½ hour movie. The film suffers from wooden acting, but there are good performances from Lee J. Cobb as the father, and Maria Schell as the love interest. I would love to read the book at some point.
Rating 5.5


Mr Hulots Holiday (1953)
Directed by and starring Jacques Tati. Not laugh-out-loud funny, and probably not for everyone. The gags are quite inventive and cute, and, well, Tati-esque. I like his style, but wouldn’t watch it every day.
Rating 7.5


Umberto D (1952)
Italian neorealist film directed by Vittorio De Sica. A story about poverty. The lead character, Umberto D, is named after the directors own father and the film is dedicated to his honor. Of his entire career, this was the film De Sica treasured the most.
Few professional actors were used, Carlos Z, who plays Umberto D, was a 70-year-old professor from the university in Florence. De Sica spotted him walking down the street.
The film came under attack. According to Andreotti, De Sica was guilty of “slandering Italy abroad” by “washing dirty linen in public”. The communist party also attacked the film calling it “pessimistic”. The film opened without organized support, competing against more popular fair Don Camillo (1951). Umberto D (1952) was a flop, but has since been reappraised.
Rating 7.8

Have you seen any of these films? Agree or disagree? Any favorites? As always, comments are welcome