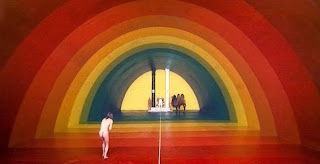 Can you guess which of these reviewed films the image is from? Below was written over the last 2-3 months, so why not share! Ratings are from 1-10, with 10 the highest score possible. Next week, I'll share mini-reviews of films from 1990-2010s. No 80s movies apparently.


39 Steps (1935)
The usual Hitchcock scenario of an innocent man falsely accused. A good thriller with many twists and turns. The political speech was the stand-out scene.
I would rank 39 Steps below Hitchcock’s masterpieces. Still really good, and worth seeing.
Rating 7.6


Red Dust (1932)
Strong performances by Clark Gable, Jean Harlow and co, and entertaining dialogue. It has the atmosphere of a play.
Rating 7.7


People on Sunday (1930)
Silent film written by Billy Wilder. It was a sweet, atmospheric movie, although the age gap between the two young girls and the two older men was bordering on creepy, and that was distracting enough for me not to be fully won over by its charm.
Rating 7.2


Lost Horizon (1937)
I felt I had been on an adventure with these characters.
Favorite quote: ”Perhaps because you’ve always been apart of Sangri-la without knowing it. I’m sure of it. Just as I’m sure there’s a wish for a sangri-la in everyone’s heart”
Rating 7.7


Rome Open City (1945)
Considering the reputation of this film and its director, I was underwhelmed. It does depict poverty and resistance during WW2 in Italy, but in an unmemorable way, and soon forgotten. The only scenes that stood out were hiding the gun in the bed, the torture scene, and the ending.
Noteworthy as a groundbreaking technical achievement, in that most of the actors are amateurs, it was shot with no artificial lighting, and scenes were filmed with handheld cameras. This paved the way for a new generation of filmmakers in what was known as neorealism.
I can imagine this a film that would have been a lot more meaningful to watch in 1946, because people had experienced the war years.
Rating 6.0


The Red Shoes (1948)
The red shoes ballet sequence in the middle of the film is visually stunning. What came before and after that was just okay to me. Aside from that sequence, it just wasn’t for me. I’m pretty sure a female audience would enjoy it far more than I did.
Favorite quote: -“Why do you want to dance?" -"Why do you want to live?”
Rating 7.5


Kind Hearts and Coronets (1949)
Cold of him to be so focused on the money and have so little interest in getting to know his own family. My intuition was right early on, that he is not quite right in the head.
Great performance by Alec Guinness, who plays many different members of the family.
Rating 7.7


Summer interlude (1951)
I didn’t know Ingmar Bergman was capable of writing a warm and bubbly main character. This film is proof that he is able to. It's not his best work, but worth a look.
Rating 7.2


Journey to Italy (1954)
Some thought-provoking dialogue, and good performance by Ingrid Bergman, but an average story. The director appears just as interested in showing us sightseeing destinations in Italy, as showing us the relationship.
I wish they had not picked George Sanders to play her husband, to me he is a mediocre actor, and always the same in every performance.
Favorite quotes: “I don’t think you’re very happy, when we are alone. –Are you sure you know when I’m happy? - No, ever since we left on this trip, I’m not so sure”
“How can they believe in that, they are like a bunch of children? - Children are happy, Alex I don’t want you to hate me, I don’t want it to finish this way! – Katherine, what are you driving at, what game are you trying to play, you’ve never understood me, you’ve never even tried, and now this nonsense, what is it you want?”
Rating 7.0


Jailhouse Rock (1957)
Considered among the best Elvis movies. His acting is alright. The stand-out scene was the jail house rock song.
Rating 7.0


Some Came Running (1958)
Stars Frank Sinatra and Shirley Mclaine, who both shine. The ending feels unfinished, but the rest is good. Apparently it’s Richard Linklater’s favorite film, there are hints that it was an influence like the opening on the bus.
Favorite quote: ”What I meant was that a man ought to pick his spot...
...not go wandering all over the world.
- Isn't that what they told Columbus?
- Yeah. Ha-ha-ha! And he never died rich”
Rating 7.5


Black Orpheus (1959)
The filmmakers overdid it with the dancing sequences, yet a film that puts you in a good mood.
I personally prefer Jean Cocteau's adaptation of the Greek tale, but Black Orpheus is a colorful and unique take on the story.
Rating 7.2


Rocco and his Brothers (1960)
Italian family saga directed by Luchino Visconti. Themes of hardship, poverty, supporting your family, and so on.
A love triangle between two brothers and a girl causes friction. I don't remember too much about story, and is only a few days since I saw the film, so that counts against it for me.
Rating 7.4

Spartacus (1960)
Among the few Kubrick films I had not seen. I was into it the first hour, but after the break-out, I thought it became boring in the middle hour.
Impressive set pieces and looks authentic.
It picks up again in the last part. The number of extras for the battle scenes and marching was quite astounding, would have loved to have seen it on the big screen.
The “I’m Spartacus!” scene is a moment people remember.
Rating 7.8


L'Avventura (The Adventure) (1960)
I loved the cinematography of the islands. The story is basically a series of random conversations, and the pacing is like real life. You could dismiss the film by summing up the plot in a few words, but it manages to capture Italy, and has its own mood.
The scene when the blonde woman is confronted by all the Italians was almost horror movie territory! The title is misleading, as it really isn’t what I would call an adventure.
I found the film a bit of struggle to get through, and it took me most of a day stopping and starting.
I don’t love the films of Michelangelo Antonioni on a personal level, yet I appreciate he has talent as a filmmaker.
Rating 7.5


The Hustler (1962)
Good performance by Paul Newman, in what was one of his signature roles.
For me the best part of the movie is the opening game with Minosota Fatts, the rest is good, but doesn’t quite reach that standard.
Favorite quotes: “One of the best indoor sports feeling sorry for yourself, a sport enjoyed by all. Specially the born losers”
"We have a contract of depravity. All we have to do is pull the blinds down."
Rating 7.6


Charade (1963)
A bit far fetched that Audrey Hepburn character knows none of her husband’s family or friends, yet is entertaining, with surprising developments. I’m still not convinced Cary Grant is a GREAT actor, but he does have fine chemistry here with Audrey Hepburn.
Rating 7.6


Faces (1968)
Low budget b/w independent film from director John Cassavetes. Not a story in the traditional sense. We get to see shouty drunk people fooling around, and dialogue-driven improvised performances. The conversations go in waves, from anger to laughter, and so on. Often quite funny. Does become slightly repetitive in the middle part, with repeated visit to Gena Rowlands, and repeated night club scene.
Favorite quote: One of these days you girls are gonna charge. And you want to know something funny, we’ll all surrender, and you can have everything. You can have the house, and the car, and the office, and the bills, and the headaches, and we’ll sit home and laugh. That’s what we’ll do, all we ask for is peace. Give us our daily beating, three square meals, bread and water. And we’ll just sit staring at the sun, and go blind, okay?”
Rating 7.0


Memories of Underdevelopment (1968)
It has a few noteworthy scenes, with the protagonist day dreaming about women while looking at a picture of the painting The Birth of Venus by Botticelli. You get inside the head of the main character, but overall the mix of Cuban news footage and his chase after young girls didn’t add up to anything interesting.
Maybe if I knew a bit more about Cuban history it would make more sense.
As it is, I got very little out of it.
Rating 6.0


The Italian Job (1969)
Not as funny as it thinks it is, but worth it for the exciting heist/car chase. The cliffhanger ending is a classic.
Rating 7.8

Un Homme Qui Dort (1974)
Quite haunting, but also quite depressing.
Favorite quote: "Indifference to the world is neither ignorance or hostility. Not to grant a privileged status to any one thing you read."
Rating 7.2


Holy Mountain (1973)
It’s a visual masterpiece, even though the frog theatre killing scene, and the fact the guy had 20 wives, prevented me from loving it completely.
Many wild ideas, making gold by mixing excrement/sweat, a stone that has a soul, to save the economy killing 4 million people, a computer that can have an orgasm, a guitar/gun combo. A computer that can calculate which toys children should have to prevent future wars.
Favorite quote: “The fish thinks about his hunger, not about the fisherman. It is the master who seeks the disciple. You want to know the secret, but man cannot see nothing but himself. To accomplish the alchemical work you will have these companions. They are thieves like you, but on another level. They are the most powerful people on the planet. Industrialists and politicians."
Fav quote: “This is the moment when the word is made flesh”
Rating 8.2


Woyzeck (1976)
80 minute drama directed by Werner Herzog. Based on an anti-military play.
Most of the philosophical rambling made little sense to me The dialogue is at times interesting, yet feels staged and unrealistic. A great performance by Klaus Kinski, as the mentally unstable, jealous husband.
My favorite part is about an hour into the film, when his wife tells the children a sad story, and all they want is for her to sing to them. Quite a moving scene. The ending by the river is also memorable.
Rating 7.5

Have you seen any of these films? Agree or disagree? Any favorites? Comments are welcome.