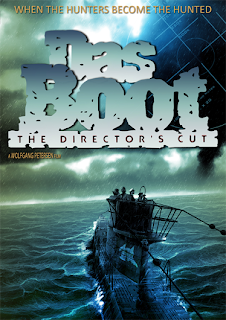 The title translates as “The Boat”, a World War Two film that I have known about for years. For some reason I never managed to see the whole film, except a few scenes here and there. So that, and the fact it's considered among the best submarine films of all-time, made it a great choice for Ryan McNeil's 2014 blindspot series blogathon.

Das Boot is based on the German book of the same name by Lothar-Gunther Buchheim, who in turn based it on his own experiences.
Originally made as a miniseries for German television. Das Boot received a theatrical run in the early 1980s and was then re-released for the cinema over a decade later in the form of a longer director’s cut. 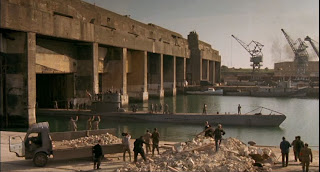 I watched the director’s cut, which apparently gives you more characterization, so you care a bit more about the crew. It is odd that we should empathize with the Nazis, but you don't even think about that after a while, and just look at them as people. I suppose that was partly the aim, to humanize the characters, and show they are just like you and I. As far as I can remember, we never leave their side the whole movie. The anti-German coalition is only visible from a distance. 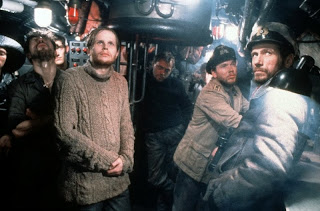 The film does a good job of emphasizing the importance of singing and music to lift their spirits during hard times. I loved the main theme, beautiful and epic. 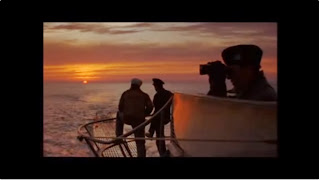 There’s lots of drama and tense moments, but the story is fairly vague. It was not clear to me what their actual mission was(besides the obvious of torpedoing enemy ships), and why they needed to go to Italy via Gibraltar? Perhaps the crew was uncertain what the next move was, so that vagueness could have been intentional. I did read about it afterwards on wikipedia, and that helped me figure out a few loose ends.

There are memorable scenes, when they witness the burning ship at sea. Also when the crew visit the Nazi group, and are offered an elaborate meal, with the hope that they in exchange will tell war stories. There's also a well-acted scene where the chief mechanic, Johann, loses it, and goes into a panic. I don't want to give away important plot points, so I'll refrain from mentioning other stand-out scenes. 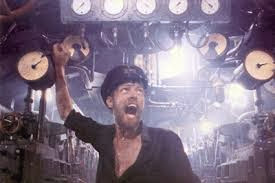 Its high production cost ranks it among the most expensive films in the history of German cinema. The director Wolfgang Peterson is German, and thanks in part to Das Boot, would later have a career in Hollywood. Notable films in his resume are The Neverending Story (1984), Air Force One (1997), The Perfect Storm (2000), and Troy (2004).

If you don't like subtitles, you can watch the film dubbed in English, which worked fine for me. All of the main actors are bilingual in German and English, and when the film was dubbed into English, each actor recorded his own part. The German version is dubbed as well, as the film was shot "silent", because the dialogue spoken on-set would have been drowned out by the noise.

Author of the book, Lothar-Günter Buchheim, uttered concerns about the end result, and felt that unlike his clearly anti-war novel the adaptation was "another re-glorification and re-mystification" of the German World War II U-boat war, German heroism and nationalism. He called the film a cross between a "cheap, shallow American action flick" and a "contemporary German propaganda newsreel from World War II".


Agree or disagree? Have you watched Das Boot? Which are your favorite submarine movies?