A new batch of mini-reviews. As always, scores of 7.4 and above are recommendations. Again, I've tried to write reviews without spoilers: 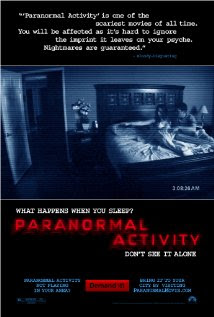 Paranormal Activity (2007)
Genuinely scary. Really enjoyed this found footage horror movie. The girl kinda looked and sounded like Jenna Fischer, the secretary from the US version of The Office? Only minor issue I had were the last 5 seconds, which I could have done without. Also, why didn't the couple close their bedroom door at night?
Very well-done, got my heart racing, that's for sure. Better than I imagined it would be. There's a good chance I might watch the sequel(s) next year.
Apparently the most profitable film ever made, based on return on investment. Proved yet again that you don't need name actors and a big budget to make an effective film.
Rating 7.8 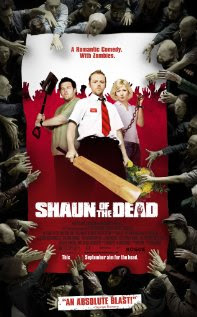 Shaun of the Dead (2004)
Quotable zombie comedy. Partly inspired by an episode of the tv-series "Spaced" entitled "Art", also starring Simon Pegg. Also, a loving tribute to George A. Romero's Dead-trilogy.
The title is a reference to Dawn of the Dead, and deals with similar themes to that 1978 movie.
Shaun of the Dead looks at how we can walk through life in a zombie-like state and not even notice what's happening. So used to violence on the news we don't pay attention unless it concerns us.
The first 30 minutes or so were the most entertaining to me. The remainder follows any zombie movie you can think of. The jokes are not laugh-out-loud funny in my opinion, a few giggles here and there. If I were Dire Straits, I might think of suing! The profanity count was pretty high for this one.
Doesn't make sense they leave the flat to head out to the pub for safety, but maybe this is part of the irony that they are making fun of the genre cliches. The ending was memorable, even though it has been done before.
Quite a bit of attention was paid to the soundtrack.
Rating 7.5 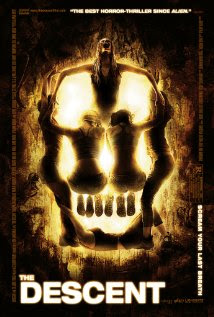 The Descent (2005)
Best to know as little as possible about the story going in, I avoided the trailer. Recommended by Eric from The Warning Sign. British horror film with all-female cast. If you want to follow a group of cute 20something girls while you watch your horror, give this a try.
I felt I was down there with them, and you won't feel the urge to explore caves after a viewing, I can guarantee it! Confined claustrophobic spaces give me the creeps. The filmmakers considered it too dangerous and time-consuming to shoot in an actual cave, and the cave featured in the film was built at the studio, which surprised me reading that afterwards, never could tell!
For suspense and tension, The Descent is brilliant. A horror alternative to The Goonies. There are moments of gore, so not for the squeamish.
The timing of the release with the London underground bombings in 2005 was a rather unfortunate coincidence, which hurt box office sales. Brits were obviously not in the frame of mind to watch horror below ground.
Spoiler: You could interpret that the crawlers never existed, and Sarah was slowly going crazy, descending, because of the trauma of losing her husband and daughter. Not learning the full truth of the origin of the crawlers, and if they are partly human, may add to the terror.
Rating 8.0 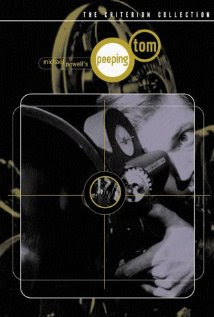 Peeping Tom (1960)
Psychological thriller about a messed up loner with father issues who stalks models with a camera. You empathize with the villain, and this was a controversial issue when the film came out.
We follow his escapades in the first person, and are a voyeuristic accomplice to the crimes, we witness the pain and fear of his victims. Among the first films to question the audiences voyeurism. What keeps us watching a film such as this about a murderer? As film lovers we are voyeurs, spying into worlds that are unknown to us. The question is, what should we watch? The protagonists sick obsessions with the captured image are comparable to the audience wanting to watch blood and gore. In other words, we are confronted with ourselves, and our own morbid pleasures.
Great performance by Karlheinz Böhm as Mark. However it was a little tame for me by today's standards, not as controversial as it once was. Good story, but I couldn't figure out what the filmmakers were trying to say, except we should try and understand obsessive serial killers and their motivations, and that people have secret desires. Not bad, just not a masterpiece in my opinion. Not sinister or dark enough to scare me.
Serial killers and voyeurism have been done so many times cinematically, that Peeping Tom may not be as powerful to me for this reason.
I could imagine the Germans hate this film considering Mark's accent. I think a rewatch is needed in future to figure out if I like this film or not. Don't let my critical review stop you from giving it a watch :)
Rating 7.5 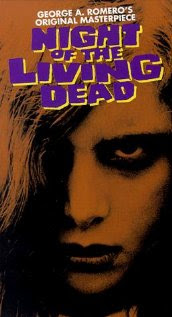 Night of The Living Dead (1968)
The music is a big reason why it works. The camera cuts away from most of the gore, to save money I suppose due to the low budget. The audio of the actors speaking is also amateur level, but you get used to it.
I like the documentary style approach to the zombies, that there is a scientific explanation, and not just supernatural mumbo jumbo. Again, a classic that is not really scary to me, probably because flesh-eating zombies are so far from reality.
The girl's fake blond wig is very obvious, trust me to spot the little things that don't matter...
Acclaimed because it set the bar for future zombie movies. Noteworthy for its place in film history, and extra points for originality. I can only look at it with today's eyes, something tells me it was a little more powerful and impactful in 1968. These days, if this was a new release, it would be called one of many, and cliché. Back then it was inventive. Still pretty good, though I wouldn't call it great.
Apparently there is a sly political undercurrent, which has to do with unease, racism, armageddon, fear of the mob, and that you can't take anything for granted any more.
I couldn't see that at all, except the final couple of minutes, maybe people are reading too much into the film? I prefer Dawn of The Dead (1978).
The director George Romero has said in an interview: "It was purely an accident that the lead role was cast with a black actor, who happened to be a friend of ours, and who was the best actor available to us. That gave it some power, it didn't go unrecognized by us, but we were out to make a horror movie. (...) We were somewhat aware of it in the first film, in Dawn of the Dead (1978) and Day of the Dead (1985) it was much more conscious, and therefore I think is much less innocent."
Rating 7.5 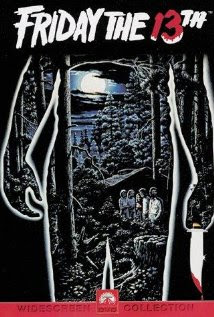 Friday the 13th (1980)
A little too by-the-numbers for my taste. There was a time in late 70s/early 80s when teen slasher was fresh, and classics such as A Nightmare on Elm Street (1984) are still effective today.
I couldn't see anything amazing about Friday the 13th (1980) that hasn't been done in 100 other movies since then. That’s not the filmmakers fault, but just the movie business has drained the premise to cliché. Probably works as nostalgia and for teens.
Surprised it spurred numerous sequels. Part 1 does have a memorable ending.
Trivia: Siskel and Roger Ebert spent an entire episode of their TV show berating the film (and other slasher films of the time) because they felt it would make audiences root for the killer.
Rating 6.5 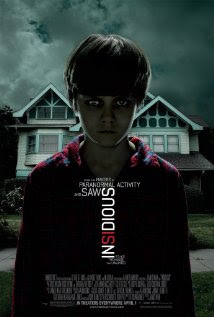 Insidious (2011)
I liked a couple of the ideas, the baby alarm and the coma. Overall a "meh". The movie suffers from being overhyped, was only decent to me. I never quite cared enough about the family, even though the filmmakers actually tried to make me feel for their plight. There are a couple of scares, unfortunately I was bored. Not essential viewing. Probably the most unmemorable of all the 20+ films I saw in the horror marathon.
Rating 6.0 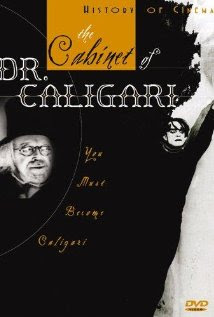 The Cabinet of Dr Caligari (1920)
Considered one of the greatest horror movies of the silent era. Recommended by David at Taste of Cinema and Gregory at Film Clatter
We are thrown into a nightmarish world in which no one is to be trusted. I had to look up somnambulist, which is another word for sleepwalking. Has a few creepy moments, but mostly it was the story and atmosphere that grabbed me.
As Gregory wrote in his review, the walls, shadows, and buildings are out of shape, and add to the surreal atmosphere. Even the acting is exaggerated.
A film I could easily rewatch. This movie is cited as having introduced the twist ending in cinema.
Rating 8.0 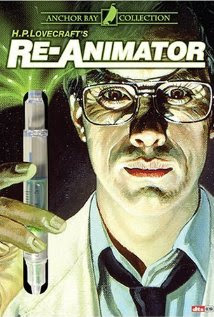 Re-Animator (1985)
The trailer sums up the movie. About bringing the deceased back to life. I think I was misinformed that this is a comedy? Didn't make me smile or laugh one time. HP Lovecraft is a famous horror writer, so gave it a chance. I don't see the difference between this film and Frankenstein. Perhaps a short film about a headless character was what this should have been instead. Great make-up and gore effects, I'll give it praise in that department.
Must be a group of people who enjoyed it, because the rotten tomatoes score is 93%. Not for me.
Rating 5.5


Agree or disagree? Have you watched any of these? Which horror films did you see this month? If you are a horror fan, don't forget to stop by in a few days for part 3 !
Posted by Chris at Saturday, October 27, 2012