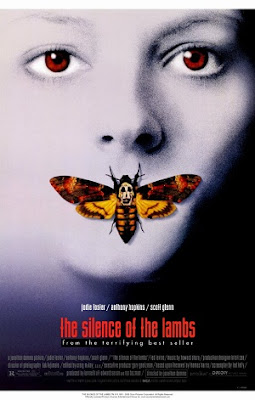 It was the first horror film to receive an Academy Award for best picture. (You could argue it's a thriller I suppose). Not since The Exorcist (1973) had a horror flick been so applauded.

Author Thomas Harris is perhaps most widely known for this Oscar-winning 1991 film based on his bestseller novel The Silence of the Lambs (1988).

The director Jonathan Demme wisely resisted the temptation of blood and gore in favor of a riveting and spine-tingling psychological thriller.

It isn't easy to explain why a civilized person would want to watch such lunatics on screen. Harris maps the inner landscapes of both detective and criminal. Perhaps public fascination with Lecter and the other psychopath in the story Buffalo Bill, is the fascination we feel with all serial killers, the attraction of the monster in society.

Dr. Hannibal Lecter (Anthony Hopkins) is only in the film for about 30 minutes altogether. A brilliant psychiatrist now safely under lock and key, and known as Hannibal the Cannibal, because of certain acts in his past.

What sets Harris's work apart from most run-of-the-mill crime-thrillers is his exploration of the motivations behind criminal madness. His killers are human monsters whose psychoses can be mapped, but Lecter remains frighteningly inexplicable. As a psychiatrist, Lecter is able to accurately analyze the inner depths of those he encounters, but he remains seemingly unreadable. Perhaps Lecter doesn't even know himself why he is a cannibal. As Clarice points out, maybe he is afraid to look at himself. 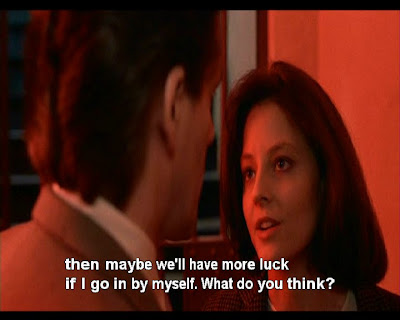 Clarice Starling (Jodie Foster) is the heroine detective, intelligent, competent, and also quite vulnerable due to her inexperience as an FBI investigator. The previous victims are women, and Clarice must transform the outrage she feels as a woman into something useful.

Although Jodie Foster was in Taxi Driver, and won an Oscar for The Accused, Silence of the lambs solidified her status as a leading actress. She won another Oscar for her performance as Clarice Starling.

The film and the book became attractive for both genders. The story from the point-of-view of Clarice is a reversal of the "woman-in-peril" or the "psycho chases girl", a formula seen often in "slasher" movies of the seventies and eighties. 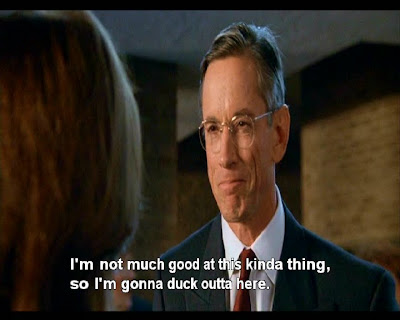 Clarice is isolated from men, bonding only with father figures and mentors such as Lecter, and laconic Jack Crawford (above), the pragmatic head of the FBI's Behavioral Science division, who both respect Clarice’s abilities, rather than see her as merely a body. Clarice is simultaneously repulsed and curious about Lecter, as the audience is too.

The viewer can interpret the murders as clues without feeling guilty, because we are seeing things from Clarice’s case solving perspective. The FBI are only being rational in order to discover who the criminal is.

To "silence" the lambs has several possible elaborations. First, the victims of bodily violence are silent because they are invisible or dead. The other understanding of silence is the meaning that Clarice's emotion-laden narration is to represent: at 12 (the age of puberty) she heard the cries of the about-to-be-slaughtered lambs and rescued one (temporarily) from its fate (a fate it is returned to by a policeman). This rescue has become the ground of her code, the justification for joining the policemen against the world's criminals. 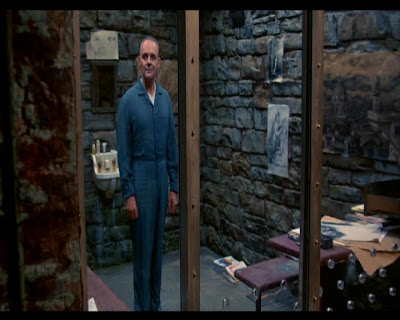 There are many close ups, which make you want to pull away. The Lecter character is talking directly to the audience, as if we are Clarice ourselves. We experience her fear and frustration. This transports us into the world we are observing.

Anthony Hopkins is perfectly cast as charming and psychotic Hannibal Lecter, as Jean Dujardin was born to play The Artist, you can’t imagine anyone doing it better. He walks the line of not being too over the top, and being a character we would remember forever. Feeding on pain and suffering, Lecter refuses to cooperate with Starling unless she provides him with details about her past. He is a walking contradiction, a cannibal, but he is extremely polite and intelligent. Lecter's combines the power to manipulate people through conversation, with being a good analyst, and finding the hidden vulnerabilities and motivations of others. His interviews with Clarice illustrate this power.

Director Jonathan Demme cast Anthony Hopkins because a mega star like Jack Nicholson or Robert De Niro would have focused the audience’s attention on the actor’s performance rather than the story – and thus would have weakened the film. (In my opinion, we still focus on the acting, so I don’t know if he’s right). Screenwriter Ted Tally talks about on the dvd that there was a danger Lecter would become a cartoon hero, so they needed a great actor for the role.

Demme claims Hopkins is so good that the audience finds itself rooting for Dr Lecter, in spite of his nature.

Horror director John Carpenter: “Someone like Hannibal Lecter is an interesting character because he combines this brilliant mind with an absolutely horrifying monster. We are all frightened of the unknown and also of the repressed people in our society”

The FBI viewed the film as a kind of recruiting movie for agents, which was a big issue at the time, they thought it would be a positive force in attracting more women to the FBI. However, according to the dvd booklet, the feds insisted they would never send a rookie agent alone on such a dangerous mission. 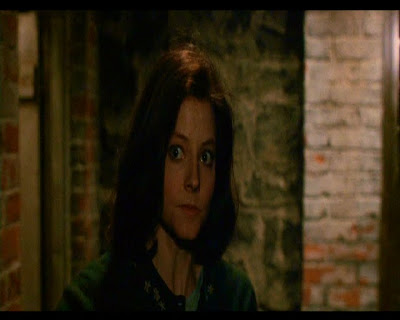 “I think the great thing about Hannibal Lecter is that he is not a cardboard villain, he is not somebody who sort of wags his tongue and hisses like a serpent only, he has a much deeper side to him, and it’s the fact that that deeper side is continuously disrespected by society, or perhaps by his parents, or any number of cultural problems. What’s caused him to become crueler and crueler and crueler, is the fact that his heroic side has never been respected. The thing you have to love about Hannibal is that he understands, and is interested in what is deeply emotional, and what is deeply human. He may not have that humanity himself, but he is fascinated by it, and in some ways is more empathetic to humanity, to the people who are marginalized, to the people who are trivialized. Much more sensitive to the underdog than your average villain.”

There were some critical voices that attacked the filmmakers for their portrayal of women and transsexuals, though you could argue Gumb does not represent a clear sexual identity.

Fans of the trilogy, and Michael Mann’s Manhunter (1986), will no doubt be curious about a new TV-show that is set to air in January 2013, based on a young Hannibal, starring Mads Mikkelsen as Dr. Hannibal Lecter, Hugh Dancy as Special Agent Will Graham, and Laurence Fishburne as Agent Jack Crawford.

Sources:
1001 Movies You Must See Before You Die

Mann, Karen B. "The matter with mind: violence and 'The Silence of the Lambs.'(depictions of women among male structures)." Criticism 38.4 (1996)

Email ThisBlogThis!Share to TwitterShare to FacebookShare to Pinterest
Labels: Film review, The Silence of the Lambs