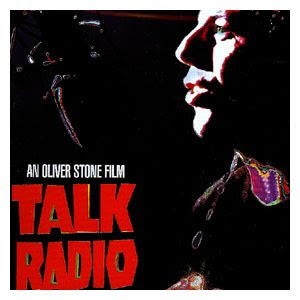 I really liked this film, apart from the last line in the script, which was not the kind of ending this gem deserved in my opinion.

Definitely a film I will be rewatching, the story is simple, but the script is full of unique dialogue you can get your teeth into. The main character may not be the most endearing or lovable person, but his motor mouth is very seductive and I couldn’t stop watching. I particularly enjoyed the scene where the radio host becomes vulnerable and the camera spins around his head, the people phoning in begin to get under his skin, and he shows some of his true self. The performance by the main character is very memorable.

It’s more or less a radio program made into a movie, so you could argue the reason for making it into a film, but I am glad to have witnessed the characters facial expressions, which I feel add much emotion to the audio.

I hadn’t even heard of this small Oliver Stone directed movie until recently, it appears to have been overshadowed much like Scorsese’s ’After Hours’ was by more mainstream 80s pictures such as Wall Street, Platoon and Born on the 4th of July. Perhaps I shouldn’t be surprised how good Talk Radio was, as Oliver Stone could hardly put a foot wrong in the 80s and early 90s.

A little slow in the middle part, but I give this underrated movie a solid 8/10.

If you have watched this movie, let me know what you think in the comments...
Posted by Chris at Tuesday, August 03, 2010