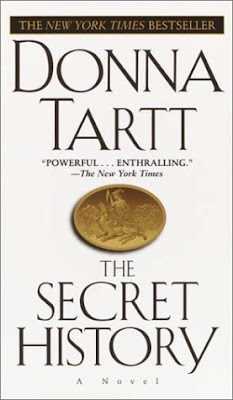 I keep seeing people recommend this novel online, several sites I follow have: getmorebooks and booksiloved

I thought I better review this novel before I forget what I thought about it.

Without giving anything away, the story takes place mainly in a New England American college environment. The main character, outsider Richard Papen, narrates his experiences, meeting new friends, and the reader like Richard is in a way seduced by a group of students studying Greek. The professor Julian is like a father figure to them, the group mostly come from dysfunctional families. The 5-6 students are somewhat cut off from the other pupils at the college, the plot is about how they deal with several horrifying events, to say more would spoil your enjoyment. The story is deeper if you know your Greek mythology, but it doesn’t matter if you don’t.

My favourite section of the novel is the first half, especially the chapters about living in the summer house and the cold room were memorable. The supporting characters are very real and richly described, and this I liked. Due to the realism I felt transported to another world. Unsurprisingly I have read in an interview that Tartt also went to college and was interested in classical Greek.

Richard is a great narrator, you really get under his skin and see the college world through his eyes. If I had to compare the inner voice, it would be Charles Ryder in the British TV-series ‘Brideshead revisited’, but ‘The Secret History’ didn’t have the strong homosexual undertones of Evelyn Waugh’s story.

I thought the suspense was a little uneven. The editing could have been sharper, the book is a little drawn out being 500 pages. I felt 200 pages could easily have been cut, not a whole lot happens from pages 260-450. The novel might have been more suspenseful, if it was only 300 pages. Although her writing is beautiful, maybe it doesn’t apply so well to the crime fiction genre, which I prefer to read quickly.

I would call the book psychological crime fiction, as it’s more about the psychological effects of crime than the actual crime itself. Other themes are social conformity and acceptance vs. individualism, poor judgement through guidance or lack of guidance from parents. In this case, the conformity is Richard's desire to be a part of a group and learn Greek, but the consequence is him getting into trouble.

The lack of guilt in the book is disturbing and interesting, the guilty ones seemed more concerned with not getting caught. We don't get inside the heads of all of them (only the narrator), so it's tough to say what they all feel inside. Much like Richard we are observing the events and trying to figure out the emotions of the other characters. Can you justify killing? Even in self-defence or an accident, is open to debate, can you live with the consequences?

I don’t know what to rate this book, probably an 8 out of 10, I am slightly torn, some parts I loved. But I wish the editing had been better in this impressive debut novel.

I recommend you give it a shot, especially if you are familiar with college life. But her writing style is not for everyone. It spent 13 weeks on the New York Times bestseller list and was translated into 24 languages. It’s in ‘1001 books you must read before you die’.
Posted by Chris at Tuesday, August 17, 2010