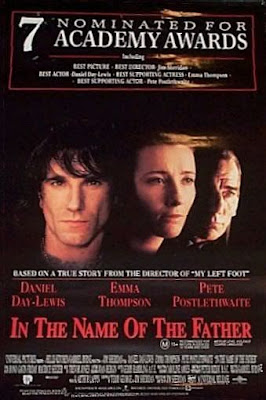 Very powerful, moving and suspenseful story. Originally I saw this film in the mid 90s at school and even wrote an essay on it. I have since watched the film several times, now one of my favourites.

Based on a true story. Partly a prison drama and legal battle, partly a story about growing up. I remember being especially moved by the deeply emotional scenes between the father, Pete Postlethwaite in an oscar nominated supporting role, and his son played by Daniel Day Lewis in arguably one of his best parts. The performances made their characters very believable and come to life in a way I have seldom seen in other films. The characters imprisonment obviously makes it easier for us to be on their side. Father and son have different personalities and have contrasting perspectives on life. During the story their relationship develops, the father tries to teach his son to have more respect for himself, fight and take more responsibility. This film is littered with great acting, Emma Thompson is also good.

I thought the film expanded my knowledge on the IRA and the judicial system. The message of the film is very clear. The filmmakers are openly criticizing certain groups. Some were opposed to the film, as liberties were taken with the details of the story to make it more simplistic than it really was.

I feel in recent years ‘In the name of the father’ has been slightly forgotten by movie watchers. I don’t know why, the story stayed with me all these years. People at least to my knowledge rarely mention or recommend it, so this review is my way of getting people to rediscover or discover this film for the first time. It was nominated for 7 oscars, surprisingly going home empty handed.

Maybe one of the best Irish films ever made. I thought it was superior to My left foot (1989), which was made by the same director Jim Sheridan, also starring Daniel Day Lewis.

Much like The Shawshank Redemption (1994), In the name of the father is a film I feel drawn towards whenever it’s shown on TV.

Do yourself a favour, skip the trailer, too many spoilers.

Email ThisBlogThis!Share to TwitterShare to FacebookShare to Pinterest
Labels: Film review, In the name of the father