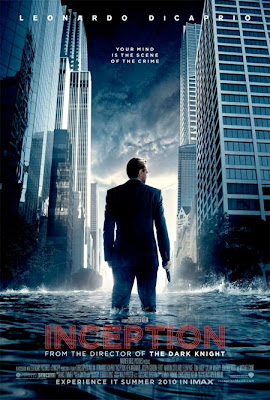 No spoilers in this review. Let me start off by saying this movie had so much hype and anticipation, which increased with the early reviews and #3 ranking on IMDB. Reviewers were saying it lived up to the expectations. I don't watch too many blockbusters these days, but this I had to see, I'm a big fan of the director.

I thought it was a pretty good and entertaining blockbuster, but for me not a truly great film. Let me try and explain why I felt this way:

I was impressed with the visual effects, the terrific score, and the ideas put into the script. However, the characters left me cold and when that occurs, I don’t care what happens to them. Especially characterization of the supporting cast was underdeveloped, we hardly hear any background details about their lives. I had a similar reaction to Scorsese’s Shutter Island, some good twists and visuals, but lacking in deeper, emotional character study.

It’s an inviting invitation that we the audience should work out what is dream or reality like a puzzle, but I feel like I spent some time and energy figuring out what was going on in Inception, but there was no intellectual payoff, no surface message, wouldn’t you expect this from a supposedly clever movie? At times it felt like a mess, and I had no idea what the director's message or messages were. The ideas only work tacitly, which I feel is disappointing and an easy way out for the filmmakers. I would have liked some quieter sections to catch my breath and reflect like there were in 2001: A Space Odyssey. The non-stop suspense and overall pace made it difficult for me to ponder Inception’s themes and ideas during the movie.

Even after subsequently reading some of the threads about the twists on the web and watching some interviews, I still feel the same. I felt it had the potential to be a masterpiece, but maybe being a summer blockbuster aimed at making spades of cash held the studio back from making something deeper.

I’m glad I saw it in the cinema and appreciate the effort gone into the making, and I still recommend you watch it as a piece of entertainment, Inception is an above average blockbuster, a great thrill ride. But just don't expect the third best movie ever made.

I may grow to like Inception more in the future, but presently I prefer some of Nolan’s other work. I felt in Inception the action scenes didn't nessesarily serve a purpose 100% of the time.

I'll be rewatching Inception, I might have missed stuff, the movie moved so fast, maybe too fast. Although, to me, it's not a movie you can ever say, I get it now 100%. The ending is open-ended, which I like in movies.

Any thoughts on Inception, readers?