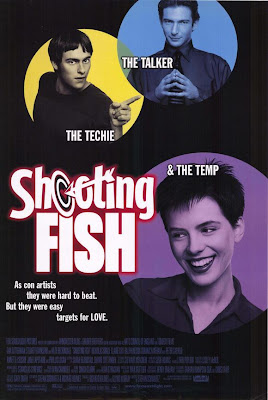 This movie has a special place in my heart. I love the humour, likeable characters and their friendships. I think it’s so underrated on IMDB. It’s funny, warm-hearted and cute.

You’re on their side, even though they are up to no good. If you know the 70s movie Paper moon, you’ll known what I mean by that, the premise is similar in the two movies. Some of the pranks in ‘Shooting fish’ I can still remember vividly, in spite of not having seen the film for 10 years. It stayed with me. ‘Shooting fish’ sure is an odd title, though ( o : If you enjoy British humour, you will probably like it.

I can see on IMDB that director Stefan Schwartz has made other movies between mid 1990s and 2005, but very few people have seen them and they have a poor rating. The Abduction Club (2002) and The Best Man (2005) might be good, as you obviously can’t trust the IMDB rating for this director. Also, remember movie comedies often get a low IMDB rating for some reason, maybe because people’s sense of humour varies. But Tv-comedy often gets sky high ratings in the 9’s, go figure!