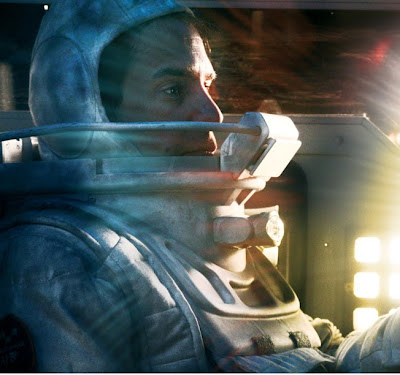 Check out the new movie Moon on dvd. It's a little similar to 2001: A Space Odyssey and Solaris, It's not exactly sci-fi, but I believe set in the future.
It takes place almost entirely on the moon.

Directed by Duncan Jones, who I just discovered is the son of David Bowie (Bowie actually made a song 'Space oddity' inspired by 2001: A Space Odyssey)

The director was going through a long distance relationship at the time of writing the story, which influenced the feeling of isolation the main character endures.

A theme in the story is the exploitation of big business on innocent people, I think they could have gone even further in exploring the character meeting himself. How would you react? And do you see yourself as someone on the inside, but are a totally different person in the eyes of others?

I like the tagline on the dvd: “250.000 miles from home, the hardest thing to face is yourself”

Sam Rockwell is a solid actor, I first saw him in 'Box of moonlight', another good film. Some may feel Moon is a touch slow. But I love the ending and how the story slowly develops and makes you think. Currently has a high rating of 8.0/10 on IMDB and 89% on rottentomatoes.