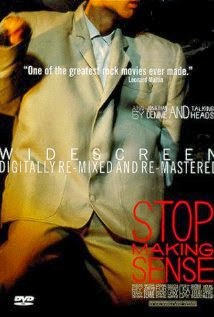 Stop Making Sense (1984)
A concert film of the Talking Heads performing many of their well-known songs.
The band really go all out, in a very energetic show, dancing, running, jumping around. I love how he at the 30 min mark ironically asks, does anyone have any questions? And they all just yell and cheer.
It seems a lot of effort has gone into the background cards on stage, yet the show is called stop making sense. Maybe it makes sense, maybe it isn’t supposed to? Either way, it’s worth watching, as the music is great live.
Rating 8.5


The Hill (1965)
I saw it because SDG at U Me and Films has it in his top 100. I really liked it. An early Sean Connery movie, and quite possibly among his best films. A memorable depiction of a prison camp for disobedient soldiers, A simple story, but what lifts the film is the entertaining dialogue and fine performances. The scenario is ambiguous about how to discipline the inmates, the Major in charge says: “you would be lost unless someone shouted a bloody order at you” and “if you’re too easy on them, you won’t be able to do a damn thing with them, sir”
Rating 8.5


The Hunt For Red October (1990)
Submarine drama. For a Hollywood film, Sean Connery's character is surprisingly enigmatic.
It does lack a bit of tension the first hour, with too many boring dialogue scenes, if I had to find fault with the story. By the second hour there are more thrills and you begin to wake up.
Rating 7.8


Indiana Jones and The Last Crusade (1989)
The third film in a row with Connery! Famous because he plays Indy’s dad, but after a while that was also the most annoying aspect of the film, with Harrison Ford calling him "dad" about 20x. It’s always entertaining and never boring, just the structure is a little too similar to Raiders of the Lost Ark. For me, I had the most fun with the trilogy when I was a child/teenager. Rewatching them as a 33-year-old, I wasn't wowed in the same way that I once was.
Rating 7.5


Night on Earth (1991)
Rewatch. Probably one of my favorite Jim Jarmusch films. Set in 4 cities ariound the world, at nighrt in taxi's. 4 stories that each last about 30 minutes. The first three are the strongest and very funny in places, while the last short in Helsinki was a bit of a downer.
Both driver and passengers are very talkative. I don't know if there is point to it all, though, besides the world is connected through humanity.
Rating 7.9


Hotell (2013)
Swedish drama. An interesting idea, with memorable, likeable characters, and good performances. There’s quite a bit of humor and sadness. An entertaining story about a group of troubled people, who join a course, to escape their problems. The film is a bit clicheed, especially towards the end, so I'd call it good, rather than great.
SPOILER: The course they go on offers age-old truisms such as the importance of camaraderie, and learning to trust someone. There’s a feeling these people needed that, and had a significant experience. Taking risks and once in a while stepping out of your comfort zone in order to grow and gain confidence. These messages are hardly original, but cannot be repeated often enough, because they are vital in life.
Rating 7.0


Borgman (2013)
Dutch drama I saw some time ago, directed by Alex van Warmerdam, that just missed out on my top 20 of 2013. It leaves you with more questions than answers. How much of the film is a dream, how much is actually happening? Are the strangers aliens, or merely a weird cult, who want to brainwash a family? The violence is quite sudden, and nasty, so it's not for everyone.
On a symbolic level, maybe it's about losing control, letting yourself disappear, and having other people decide things for you. Maybe it's about how we cannot understand foreigners. Perhaps the director is laughing at us for trying to find meaning in all the madness. You could accuse the film of not really being about anything at all, except the shocks. The kind of open-to-interpretation film, that could mean something different to each person who watches it.
Rating 7.5


Out of the Furnace (2013)
Good performances, especially Woody Harrelson was memorable, he has seldom been nastier.
Rating 7.0


Rush (2013)
Suspenseful racing drama chronicling the Formula 1 rivalry between Niki Lauda and James Hunt.
It helped I knew nothing about the 70s Formula 1 era.
Rating 7.5


About Time (2013)
Latest from Richard Curtis, the director of Love Actually. The main character’s voice-over is sooo similar to Hugh Grant, that it was kind of distracting. A charming, yet overlong romantic comedy. Goes on about 30 minutes too long, and the gimmick of going back in time to me becomes a bit repetitive.
Rating 7.0


The Last Samurai (2003)
The part when Algren (Tom Cruise) is with the samurai duing the winter was my favorite part. The last hour was a bit predictable, what would happen.
For a movie about war and conflict, it really is about the need for peace and understanding.
As talked about in the documentary Hollywood or History, it is revealed the movie is not completely accurate. The samurai are not angels, they were intimidating to the Japanese people, like an unelected government. The samurai were in fact the bad guys, wanting to go back to a bygone era when women had no rights, and a time when there was a caste system and no democracy. The Japenese Army were in reality not as bad as the film decribes, they were trying to introduce democracy to Japan.
Rating 7.5


My Father's Glory (La Gloire de Mon Père) (1990)
From the writer of Jean de Florette. Beautiful soundtrack in the opening credits. A depiction of childhood and growing up around the year 1900. It looks authentic, and is well-acted. But it doesn’t really stand out among other childhood movies, except the shooting expedition in the last 45 minutes. Perhaps it bored me the first hour, because there was no conflict.
If you enjoy stories that are very close to real life, and set in that era, you should give it a try. For me, only the last half of this movie is good.
Rating 7.3


Meet John Doe (1941)
The story has aged remarkably well. A man (Gary Cooper) needing money agrees to impersonate a nonexistent hero, whom Barbara Stanwyck character has invented so she can keep her job at the newspaper. I don't think I've ever watched a bad Frank Capra film, worth seeing.
Rating 8.0


American Gigolo (1980)
So after watching Arbitrage (2012) last year, and being entertained by the impersonation of him in The Trip, I was curious to check out Richard Gere's best performances. Directed by Paul Schrader, this movie feels like a Brian de Palma film. Told in a visually stylized way, which is probably the main reason to see it.
The plot turned out to be quite straightforward, just a standard crime drama. There was potential for something deeper, but it didn't quite happen.
The movie's main theme song "Call Me" sung by Deborah Harry & Blondie was a massive hit, and today a classic.
Favorite quote: “Are we talking about what he wants, or what you want? I can’t tell anymore”
Rating 7.0


Officer and a Gentleman (1982)
It was never boring, a story of a young Richard Gere, who comes from a troubled background, and goes into the Navy. He meets some people there. Entertaining, with a few surprises, but also a bit predictable.
Favorite quote: “Then be a friend, get out of here"
Rating 7.5


Nikita (1990)
An influential French action/thriller directed by Luc Besson, which spawned a remake, and also a tv-series. The female main character is like a wild animal.
I liked how it didn’t go for a big action scene to finish, but something emotional instead.
I'm a fan of Eric Serra, and his soundtrack added to the films atmosphere. I’m surprised Anne Parillaud didn’t become a bigger name after this.
Rating 7.6

Agree? Disagree? Have you seen any of the above? What are the best films you saw during the month of March?
Posted by Chris at Monday, March 31, 2014