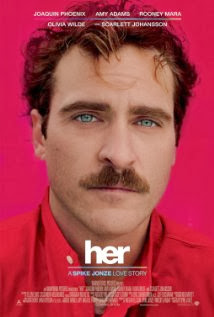 Her (2013)
A futuristic, raunchier Lost in Translation is a way to describe it. If you love computers, you should see it.
The Oscar worthy production design is really stylish, with a dash of red in almost every frame, and the acting is good. Although lacking in variety, maybe there are too many scenes of J Phoenix staring into space, some of those could easily have been discarded.
The strongest aspect of the film for me are the scenes when J Phoenix is running around with a smile on his face.
I thought it was cute, but I didn’t completely connect with it emotionally, which is why my rating is not as high as other bloggers. The raunchier moments I could have done without. Perhaps my mood wasn’t right, who knows.
I do want to see Her again in future. Has the potential to become an old-time favorite. The score is beautiful, I've been listening to that since I saw it.
Favorite quotes: “Since my break up, I haven’t really enjoyed my writing. Sometimes I’d write something and I’d be my favorite writer that day”
“Sometimes I feel I’ve felt everything I’m ever going to feel, and from here on out I’m not going to feel anything new. Just lesser versions of what I’ve already felt.”
Rating 7.7

Nebraska (2013)
Damn release dates, I've been waiting so long for this to reach Scandinavia. I’m a fan of the director's work(except 2011’s The Descendants which I disliked)
The performances are good in Nebraska, but the characters and scenes didn’t linger in my mind afterwards. I couldn’t laugh at it, as I did with his previous work, maybe because it aimed for realism and was bleaker.
So for me, despite 6 Academy Award nominations, it’s a minor film in Alexander Payne’s filmography. I probably need to rewatch it. The film does have something to say about the American dream, and the malaise of the finiancial crisis. Woody’s mentality is of the past. Now he is ridiculed and his gullible nature is exploited. Woody has a stubborn belief in the impossible, and that irritates his cynical son. His faith in the goodness in other people has cost Woody a lot of money over the years, yet it is his positive outlook on life that his old neighborhood needs.
Not bad, not great. Payne should go back to co-writing with Jim Taylor, without Taylor onboard, his films are weaker.
Rating 7.0

Enough Said (2013)
Again, another highly anticipated film from a director I usually like, Nicole Holofcener. Well-acted by James Gandolfini and Julia Louis-Dreyfus, especially the dates they go on are cute. Sporadically well-written dialogue, yet a somewhat contrived and formulaic story prevents it from becoming a great film. So it ends up being just okay. Perhaps it will grow on me, who knows.
Favorite quote: -Very attractive. –You probably think all the women at this party here are attractive. –Yeah, pretty much.
-There’s not one man at this party that I’m attracted to.
Rating 6.5

August Osage County (2013)
Family ensemble drama with an all-star cast. I thought Meryl Streep character was funny to watch, I’m not sure if that was how it was meant to be viewed. Other scenes were really serious. It was a sad story, and most, if not all the characters suffer.
Rating 7.5

Dallas Buyers Club (2013)
Excellent performances, but Jared Leto’s character doesn’t have enough to do in the film to warrant all that awards buzz. An inspiring story, but not particularly memorable.
Rating 7.5

American Hustle (2013)
Not sure why there is quite a lot of hostility towards this movie, it's not that bad. I was bored during some moments in Silver Linings Playbook. Hustle I enjoyed all the way through.
Terrific soundtrack of 70s music. A Horse With No Name by America, played in the opening scene when he adjusts his hair. Other favorites are, I Feel Love by Donna Summer from the disco scene, and 10538 Ovature by the Electric Light Orchestra, when they walk out of the plane. Good Times Bad Times by Led Zeppelin is good too.
Rating 7.7

12 Years a Slave (2013)
Superb performances, but the story was painful to sit through, so I can’t say I would recommend it.
I also don’t like that most of the blacks are angels, and most of the white slave owners are cruel.
It had its moments, especially powerful are the torture scenes. The structure of the story was too predictable, though.
The interesting thing is the slave owners behave irrationally, a dead slave is a lost investment. A badly wounded slave can't work as effectively. Yet the slave owners seem to not worry about that?
Memorable quotes: “You are an exceptional nigger Platt, but I fear no good will come of it”
“I don’t want to survive, I want to live”
Rating 7.5

Waterloo Bridge (1940)
WW1 romance starring Vivien Leigh. The story is gripping, and was quite romantic. I wanted to find out how things would end up. Avoid the synopsis on IMDb which spoils the twist. Was good, but I personally prefer the director's other film Random Harvest (1942)
Rating 7.5

Indiana Jones and the Temple of Doom (1984)
Rewatch. Used to be my favorite of the Indy series, when I was a teenager. Darker than the first film. The story is very simplistic and has implausible moments. Especially unbelievable is the boy beating up grown men, and also the henchmen shoot bow and arrows at Indy and keep missing(why not just have a gun?)
A fun adventure, just wasn’t quite as good as I remembered, yet it does have entertaining and memorable sequences all the way to the end. Will rewatch Last Crusade soon.
Rating 7.7

Labyrinth (1986)
Rewatch. Brilliant set design, which looks so vast and massive, still impressive today, I would give that aspect 10/10.
The puppet outfits are very 80s and a bit dated now. Really is aimed at kids. The plot idea of travelling into a fantasy book and going on an adventure has been done before in 1984’s The Never Ending Story, but Labyrinth does have its own world. Although, you could sum up the paper thin story in 1-2 sentences.
Musical numbers are unmemorable. The only decent song is Underground, which is the title track sung by David Bowie. He actually has top billing as the villain.
Rating 7.3

Ashes of Time (1994)
A samurai movie directed by Wong Kar Wei. Not his best work, the story is quite disjointed and difficult to follow. Cinematography by Christopher Doyle is praiseworthy. Comparable to The Grandmaster, in that the director struggles with big epic stories.
Rating 6.2

Barcelona (1994)
Finally watched the only Whit Stillman film I hadn’t seen. As expected the talky screenplay is rich, and the dialogue always fun to listen to. But the continuous pursuit of girls, who are already in relationships, somehow prevented me from caring about the two male leads. Perhaps open relationships are common in Barcelona?
Favorite quote: -"Why did you tell her?" -"You're in this conversation, it has this momentum, you want to tell the other person interesting or funny things, that on reflection, maybe you shouldn't, I would take it back if I could"
Rating 7.0

Insomnia (2002)
Understandable why C Nolan wanted to direct, what could have been an average thriller, is elevated by a surprise twist in the first half of the film. The opening by plane approaching the isolated town in Alaska is beautiful. Scenes that stayed with me, the shooting in the fog, and the chase with the tree logs.
Favorite quote: ”I am a pack rat, I keep everything”
Rating 8.0

Saraband (2003)
Bergman sequel to his 1973 film Scenes From A Marriage. surprisingly good for a tv movie.
Similar to Linklater’s Before trilogy, we meet the couple who are now older.
Things about the film I disliked, looking at the camera face on, and for example counting down when she goes in to see him was annoying. That is mainly during the first 30 minutes, so I tolerated it. The best aspect is the writing.
Rating 7.6


The Hedgehog (2009) aka Le hérisson
Based on a novel by Muriel Barbery, a warm-hearted French film, which in some ways is a companion piece to Amelie (2001), with the whimsical story elements, only in this casw told from the perspective of a child. The janitor going to the Japanese bathroom was my favorite scene.
Rating 6.7

Have you seen any of these films? Agree or disagree? As always, comments are welcome