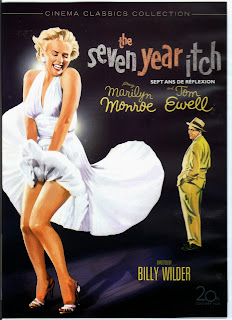 Directed by Billy Wilder, and starring Marilyn Monroe. Arguably her most iconic movie moment, when she’s wearing the white dress, and stands over the grate.

It takes a bit of getting used to, that the main character talks to himself. They would never get away with that today, perhaps it would have been a voice-over in a contemporary film?
You are never quite certain which scenes are imagined, or real, because it soon becomes evident that the male protagonist is a dreamer.

The seven-year itch is a psychological term that suggests that happiness in a relationship declines after around year seven of a marriage. The Seven Year Itch is based on a 1952 three-act play.

I liked the performances, and Marilyn Monroe obviously is the reason to see the film. Tom Ewell, who reprises his role from the stage, is very good as the man who is infatuated with her.

The film was listed at number 51 on the American Film Institute's list of the top 100 American comedy films of the past 100 years. Ewell won a Golden Globe Award for Best Actor – Motion Picture Musical or Comedy.


Agree or disagree? Have you watched The Seven Year Itch? Which are your favorite Billy Wilder films?
Posted by Chris at Saturday, March 15, 2014