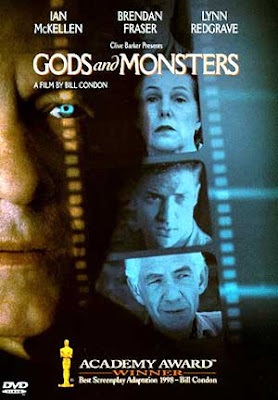 The story of doctor Frankenstein’s and the monster’s struggle to be accepted may have resonated deeply with James Whale. He grew up a misunderstood artist in a family of factory workers. Also, Whale was a homosexual, which added to him being different.
James Whale is played by Ian McKellen, who was nominated for an Oscar for his leading performance. The film won an academy award for best screenplay adaptation.

I usually hate Brendan Fraser movies, I feel this is an adequate effort by him, but McKellen is a much better actor in my opinion. It probably helped playing this role that McKellen is already gay in real life. Clearly Brendan Fraser was picked because his head resembles the monster. The film plays around with the idea of the outsider. The monster/Brendan Fraser wanting a friend is similar to the monster's behaviour in the old Frankenstein movies of the 30s.

I am not gay, but Gods and Monsters still impressed me. A good character study of what it must be like to have those tendencies and how others might respond.

Also, it’s about what it might be like to be a celebrity of the past. You can compare the tone of Gods and Monsters to Ed Wood (1994), a movie I liked as well, which also portrayed a fading star of the past who befriends someone younger. I definitely felt Tim Burton could easily have directed this, but the job went to Bill Condon. The movie owes a lot to Ed wood, so if you like that one, or just enjoy Frankenstein movies, I recommend you give this film a go. It is very similar to Ed wood, but still very different.

I liked the slow pace of the movie, the story didn’t have any big action scenes. For the most part it’s interaction and dialogue between Fraser & McKellen. The flashback sequences are interesting as well. However, I did feel there were too many scenes sitting or standing around drinking, they could have mixed it up a bit more.

It definitely has Oscar written all over it, but that didn’t bother me, instead I was touched by the vulnerable characters.

To me, Gods and Monsters is about remembering the past, friendship, loneliness, the psychology behind Frankenstein. And about being a father figure to someone in need of a friend. Not just about being gay. The first 20 minutes or so almost play out as a comedy.

Definitely gives you the itch to rewatch James Whale’s two Frankenstein movies, which is probably the movies mission, to share the love and admiration for those classics.

Also, check out my recommendation of Frankenstein (1931)

Any thought on this film, readers?
Posted by Chris at Tuesday, September 21, 2010