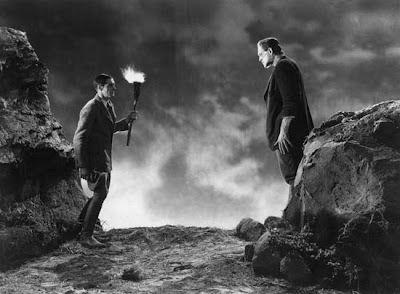 Based on the story by Mary Shelley, a lot has already been written about the Frankenstein movies. Known for its groundbreaking make-up, Boris Karloff as the monster is instantly recognizable around the world, but maybe not as scary now as it was on initial release. Certain quotes from the movie have become timeless like the doctor yelling “its alive, its alive!”The lighting and atmosphere was influenced by German expressionism films like Nosferatu (1922).

In the making of, it’s pointed out that the town people are almost villains at the end of the first movie, we sympathize with the outsider. The monster didn’t ask to be brought into the world. Because of his appearance, no matter where he went or what he did, people were frightened of him. He was more a victim than a perpetrator, who was innocent and didn’t understand the rules. Like an adolescent he was clumsy and awkward. Perhaps children and teens can especially identify, they can see the innocence, pathos and that the monster was very much a child like themselves.

Another interesting theme is about playing god, is it morally correct for doctor Frankenstein to do these experiments in the pursuit of science? Or are there certain boundaries we as humans should never cross? A little similar to the questions Blade runner (1982) poses, I think, which I previously recommended.

My favourite scene is from the arguably better sequel Bride of Frankenstein (1935), which now had a talking monster. I love the warm-hearted encounter between the monster and a lonely, blind hermit:

They made fun of this hermit scene in Mel Brook’s comedy Young Frankenstein (1974), a movie I feel is not as funny as I was led to believe. Some love him, but Mel Brook’s humor is not for me. I guess that's why there are 31 flavours at the ice cream shop!

Also, check out this week's recommendation of Gods and Monsters (1998), which is about James Whale, director of Frankenstein, and its sequel.

Any thoughts, readers?
Posted by Chris at Tuesday, September 21, 2010