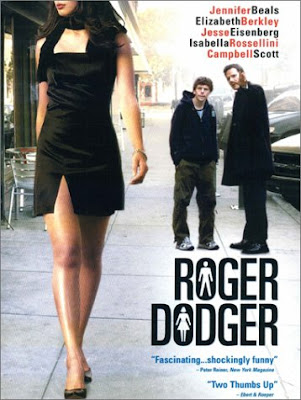 Love the energy in this independent film. To me this is a criminally overlooked low-budget masterpiece from 2002.

The main character, Roger, is nicknamed Roger Dodger. He’s a businessman, living in New York, is not particularly likeable, but has great verbal skills.
He is too afraid to look at his own problems and flaws, so is intent to study and comment on other people.
For example he acuses a woman of sleeping with her boss, but he is doing the exact same thing himself.
He attempts to predict the future of others, but is unable to predict his own. You get the feeling he is very cynical, doesn’t love himself, and is taking out his frustration with life on everybody else.

The film depicts a day in the life of Roger, his nephew sees him as a ladies man, and they go out on the town, so Roger can teach him a few tricks about seducing women. 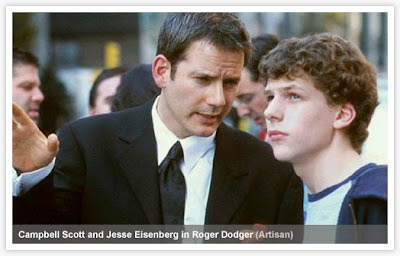 You’ve heard of self-help books. Well, this is like a “not to do” behavioural guide. The film’s strength in my opinion is the very quotable script and also the acting.

Roger Dodger is highly recommended. I’ve seen it twice and I still feel I could watch it again, as I may have missed something. Both funny and insightful. The Roger character may relate in some way to the comic strip character Roger Dodger, although I don't know, I've never read that comic.

Here is the opening scene, which is similar to the opening of Reservoir dogs, starting off with a discussion in a restaurant.

To me at least, the similar Michael Douglas vechicle Solitary man (2010) was an inferior rip-off with a weaker script.

You need to see Roger Dodger, if you call yourself a fan of independent films. I usually only call a movie a favourite of mine, if it holds up on the 2nd viewing. This is certainly one of my favourite indies.

If you decide to watch this film, let me know in the comments what you think ( :