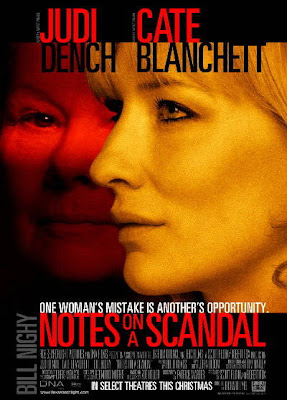 For me a well-acted British film with a great script. Interesting and complex characters. I felt the characters stayed with me after I had seen it. Character's motives make you think. It didn't insult my intelligence like some Hollywood films have a tendency of doing.
The core of the story is the relationship between two teachers. The controversial film explores how far people will go in risking their career and reputation for friendship, love and sex. Dench's character being the narrator makes you never quite know who the other people really are, as they are observed through her voice-over narration. Is she an unreliable narrator?
Makes a change to see an older woman who is not so attractive in one of the leading roles.

The film questions who the villains and victims are and it seems like it’s blurred. I cared about them, they got under my skin almost like in a book, which is not surprising, as the film is based on a novel. I felt sorry for both main characters, despite both at times being unpleasant to each other. They are believable people, despite the extraordinary circumstances.

Sheba Hart (Cate Blanchett) wants to confide in someone and Barbara Covett (Judi Dench) is willing to listen, but misuses Sheba’s trust. A criticism of the film would be that Sheba’s motives are not really explained. But you could also see this as a strong point of the story, which lets the viewer interpret. The title of the American edition of the novel is actually a question: “What was she thinking: Notes on a scandal”.

Blanchett character wants to be a loving wife and parent, but she also has a dark side and wants to escape responsibility. In this way she is a confusing contradiction, maybe she suffers with egomania, an obsessive concern with fulfilling one’s own needs and desires regardless of the effect on other people. She doesn't think about other people's emotions. For example Barbara’s cat, which is ill. Sheba is selfishly intrigued by the teenagers interest in her, even though she seems unaware that he quite possibly could be bullshitting her. 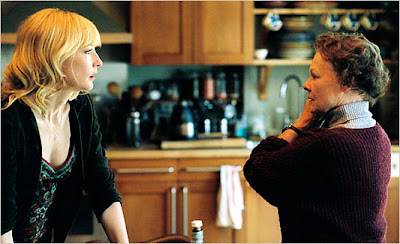 You could also argue as some reviewers have that the story might have more bite, if Barbara was not revealed to be disturbed and obsessive at such an early point in the story. As Barbara doesn’t have a life outside of her job, she is drawn to Sheba. Having no husband means Barbara has a lot of spare time on her hands to speculate and over-analyze.
Is Barbara an accomplice to Sheba’s affair by not telling the family and authorities? Why is Barbara writing the diary, is she selfishly going to use the material to publish? I have my doubts, but the movie keeps you guessing, if her motives are more than friendship. Barbara shows that sometimes people who are tough on the outside, are vulnerable on the inside. The diary she is writing also reveals as much about the teller as the subject. Barbara is most sympathetic, when she is at her lowest point in my opinion, she is driven by loneliness, but is too intense to make lasting, meaningful friendships. Barbara is probably perceived by Sheba as a mother figure, but Barbara does not see it in this light. The film is a character study of a lonely middle-aged female teacher just as much as it's a study of Sheba’s troubles. The film is also about consequences of your actions.

As with other excellent films, I feel this is one that I could see again in the future. It makes me feel like reading the novel, so I can learn more about the characters. Interestingly, the character’s names have multiple meanings.

The novel is based on real life events. The story focuses on the rift between public perception and private truth. The characters also seem oddly unaware of their mistakes, totally selfish. Perhaps for this reason the characters are a little unlikable, but wouldn’t the film be boring if they were all smiling and happy?

The film's soundtrack is by Philip Glass, which is similar to his beautiful piano soundtrack from "The Hours".

The film almost challenges the viewer to understand each person's behaviour and relationships to the other characters, which is why my review is longer than usual. You want them to admit their choices were unsound. Is there such a thing as a mental age or a point where the age difference crosses the line? Do we have a right to judge their choices? Should age difference be frowned upon, because others selfishly feel uncomfortable?

Among the 10 best I saw last year. This to me is an original story, not a copy of other movies. I highly recommend this film, if you like interesting character studies. 8.3/10

Email ThisBlogThis!Share to TwitterShare to FacebookShare to Pinterest
Labels: Film review, Notes on a scandal