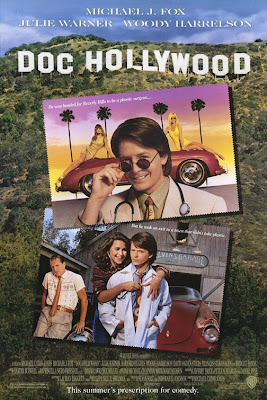 As IMDB this week in honour of their 20th anniversary are celebrating the last two decades of cinema, I thought I would chip in and share an under-appreciated release from the 1990s.

Back to the future is probably always going to be Michael J Fox’s top movie, but this film is his best outside that franchise in my opinion. (Admittedly, I haven’t seen ALL his films)

Great tagline by the way on IMDB: He's a big city plastic surgeon...in a small town that doesn't take plastic.

My favourite part of this comedy/drama/romance/feel good movie is probably the opening credits, where Michael J Fox is riding along in his vintage porsche listening to the one and only by one-hit-wonder Chesney Hawkes:

The title "Doc Hollywood" and poster are actually very misleading, most of the film is set in a small country village in the south. The name Doc and the cool car are probably things they thought would appeal to the Back to the future fans. I read the love-interest Julie Warner was chosen, because she was slightly shorter than Michael J Fox. It would seem odd for her to be a head taller. I guess many women really are taller than him!

This summer time movie I rewatched recently and enjoyed again despite the clichés. The characters had genuine charm and personality. It didn’t feel dated at all. It’s about that time in your 20s when you have to make certain choices about your future, which direction do I want to go in? What is important to me? Someone described it as a fish out of water tale. The people Dr. Benjamin Stone meets on his journey are very warm and friendly, and the town is a place where you feel like, I want to go and hang out with those characters. I want to give them a hug. The only thing I was opposed to was the final 10 seconds of dialogue, which I thought was unnecessary.

See this underrated film for the sweet-natured country-life atmosphere, where everyone knows everyone else. And it obviously helps if you like Michael J Fox. And is it just me, or does Bridget Fonda have an extremely cute and sexy smile? ( :
The nostalgic summer atmosphere reminded me of another film I like, Fried green tomatoes (1991), which I also recommend. Another warm-hearted summer film I recommend is Box of moonlight (1996)

I think rottentomatoes got the rating right for Doc Hollywood, IMDB didn’t. This is the sort of film with gem written all over it. Like someone said in a review: It's a vacation for the mind.