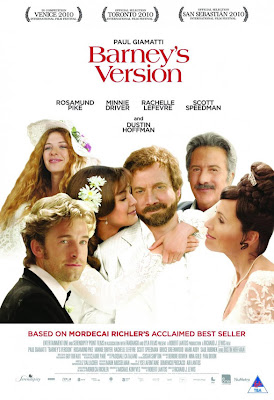 I enjoyed Barney's Version, one of the most memorable films for me of 2011. There are a number of funny, touching, emotional and unpredictable moments, some great dialogue, and also dramatic and sad scenes. I preferred it over Paul Giamatti’s Win Win (2011).

We witness 30 years of Barney’s history from the 1970s and onwards, mostly focusing on his love life. Will probably appeal more to an audience with life experience. Did strike me though that each time Barney falls in love he is like a teenager, saying he loves them when he hardly knows them, Minnie Driver's character is also naïve. I guess that's part of the charm and partly why they are flawed. It’s probably typical more in movie life than real life to behave in such an impulsive way. I liked the Miranda character the most, even though Rosamund Pike’s acting in my mind was poor, she was more likeable and intelligent than Barney, his self-destructive behaviour was off-putting at times. 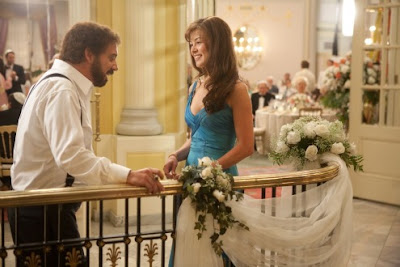 Rottentomatoes name it a seriocomic adaptation of Mordecai Richler's award-winning 1997 novel. Apparently, the story of Barney is comparable to Herzog written by Saul Bellow, about the midlife crisis of a Jewish man named Moses E. Herzog, which we see Miranda reading in the train scene. I have not read either of them.

Some reviewers found the story to be uneven and messy, but isn’t life? Maybe Scott Speedman was miscast, he seemed too young to be Barney’s best friend. Others have pointed out its unrealistic that Giamatti is a babe magnet, Barney’s slightly overweight, everyman look and his behaviour being often unappealing, drinking having made Barney’s life a blur. 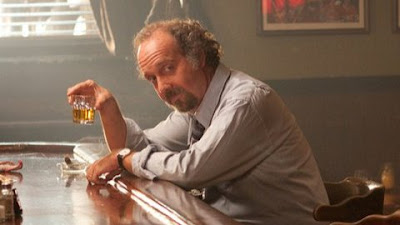 It reminded me of his wine-drinking character Miles in Sideways. As Roger Ebert points out in his review, the beautiful women love Barney despite his flaws. I agree with a fellow reviewer, who writes the characters start to become your friends, and you don’t want to have to leave them. Perhaps we can relate to Barney because of his mistakes in life. He wears his imperfections on his sleeve, and to me it's kind of refreshing to see someone so unafraid to speak their mind. During the running time, you can reflect on good and bad choices you made in your own life.

I really think Paul Giamatti should of got nominated for an Oscar, perhaps he'll get an academy award for Thomas McCarthy's Win Win. Giamatti won a Golden Globe for his lead performance in Barney’s Version.

Here are a collection of quotes I liked (spoilers)
“She’s a conversation piece, not a wife”
“Oh, Barney you really do wear your heart on your sleeve, now put it away, it’s disgusting to look at”
“The chicken is great. - Its fish”
“Our 3rd date, we are not bored silly or madly in love”
“If you want people to take you seriously, then act accordingly”
“You my darling are as grown up as you’ll ever be”
“Have I ever given up when it comes to you” -never “so what makes you think I’m going to give up now”

In my opinion, a criminally overlooked film more film-lovers should discover, in my top 10 films of 2011. Just avoid the trailer, it ruins many of the surprises.

Let me know what you think in the comments below!