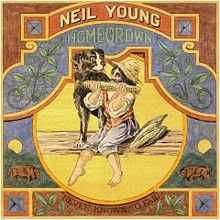 (Can you believe above acoustic track is not on any of his studio albums? The song itself was too good to shelve, so it was released as part of a greatest hits album in the late 70s. Homegrown (1975) was so near to being released that an album sleeve had been created, see above)

(Acoustic track from Homegrown (1975), ended up on the album Zuma. They say Homegrown was quite personal, and revealed much of Young's feelings on his failing relationship at the time with actress Carrie Snodgress.)

(1992's Harvest Moon is one of my all-time favourite albums. So rarely do I find an album were I like almost every song)

You And Me - Neil Young

(Also from the Harvest Moon era)


Any thoughts on the music, readers? Any suggestions for other Neil Young tracks or albums worth highlighting?
Posted by Chris at Sunday, August 28, 2011

Email ThisBlogThis!Share to TwitterShare to FacebookShare to Pinterest
Labels: Neil Young, Songs for your iPod