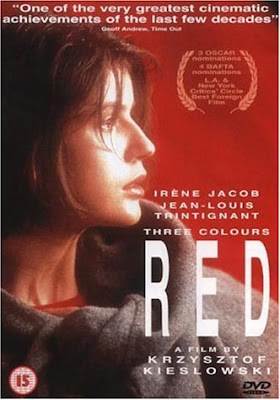 Review is intended for people who have already watched the film. Spoilers may occur.

A chance friendship develops between Kern, a disillusioned retired judge, and a young woman, Valentine, her hopes and dreams intact. His dog escapes and is the reason they meet by accident. Perhaps the film is about how much of our life is decided by coincidence. 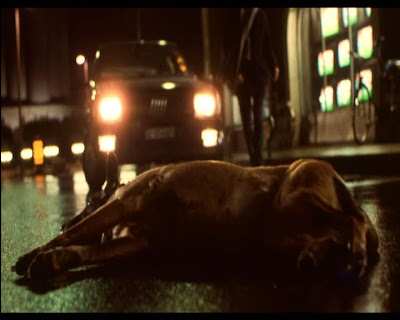 Both Valentine and the judge need to find their way in life, he makes pessimistic comments that are sort of a cry for help, he’s lonely and needs someone who will listen and encourage him to start living again. She asks what she can do to help, and the judge say, “just be there”. This is where the theme brotherhood comes into play, she can read between the lines his negative attitude is due to an unhappy love life. 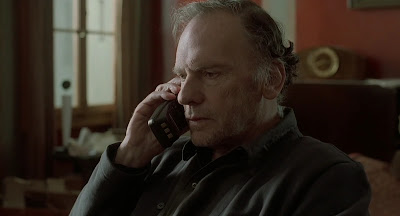 According to actress Irene Jacob in the dvd extras, Kieslowski wanted to rediscover through the two characters that moment when the world is at your feet and everything is possible. The story is about if you don’t feel love, then nothing matters. Kieslowski doesn’t take a moral standpoint and doesn’t talk about the message of his films in interviews, he prefers to let the audience make up their own mind.

Like the characters feel like voyeurs, looking into other peoples lives, we the audience are in the same boat, studying the movie characters, and can pass our own personal judgements on events, like Valentine reacts to the judge’s surveillance of neighbours. I couldn't help feeling sorry for the lonely judge, even if he is spying on his neighbours.

Windows are a central theme in Kieslowski’s work. Blue (1993) begins with Julie breaking a window in anger and despair. Red ends with Kern’s window being broken, he doesn’t repair the glass, which could be interpreted as Kern’s desire to re-enter the world.

Valentine’s boyfriend Michel only exists on the phone, we never see him during the running time. A way of indicating he is only a shadow of a man, and not vital in Valentine’s life?

Valentine insists on the goodness in other people, which has a positive effect on Kern. On the flip side, Kern acts as a father figure to Valentine, through his words of wisdom and experience, she can learn things about life and herself. His behaviour and attitude confront Valentine with a different side of existence, which she is not used to from her life as a photo model.

From interview book Kieslowski on Kieslowski: “Valentine dearly wants to think of others, but she keeps thinking of others from her own perspective. She can’t do anything else. The audience can’t help it either. That’s the way it is. This poses the question: Even when we give something of ourselves, don’t we do it to appear better in our own eyes?”
“Valentine ought to have been born 40 years earlier or the judge 40 years later, they would have made a good couple. And they probably would have been happy together. I would think they have suited each other.” (translated)

Visually the film is technically very beautiful, for me Blue is the most astetically pleasing to the eye of the Three Colours trilogy, but in my opinion Red undoubtedly comes close in matching Blue in terms of use of colour and imaginative cinematography. I found the characters in Kieslowski's White to be the most interesting, somehow Blue And Red don't leave me with as many unanswered questions or emotional impact as White did. 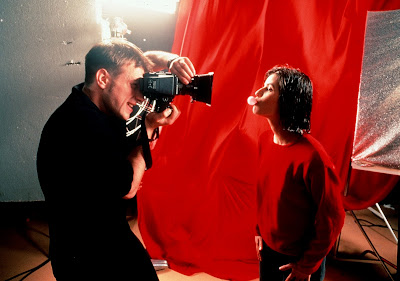 Kern could arguably be Kieslowski the artist in disguise. A person withdrawn from the world who secretly monitors it, in a detached isolated position of being omnipotent and yet powerless. Kern is God, but also a living dead. He spies on people, although this doesn’t make him truly happy. Kern wanted change, and so did Kieslowski, it was his last film as a director.

I didn’t like the opening credits. Or the ending of Red, the boating accident, which I found to be completely unrealistic and didn’t seem to fit with the atmosphere of the rest of the film. Undoubtedly thoughtful closing, but sort of absurd and ironic.
Even so, the life imitates art red background right near the end by the water was a poetic moment. Was the director merely showing that art can mirror life, or is there a deeper meaning? Was it a coincidence who survived? Does fate play a part? Or is Kieslowski teasing his audience?

Readers, any thoughts on Red, and how do you understand the ending?

Next week, look out for my review of Kieslowski's The Double Life of Veronique (1991)