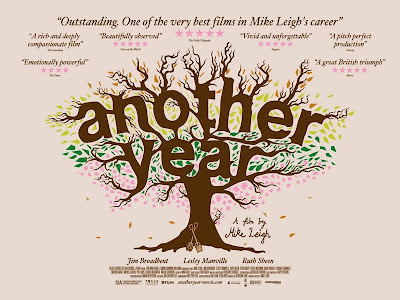 Among the best films I’ve seen so far in 2011. A contemporary drama about over 50s living in the UK, very different to anything I’ve seen in a while.

You get to know several of the characters up close and personal, their weaknesses and doubts are often on display. Probably the director wanted to make an intimate film about people his own age, heck Jim Broadbent even looks like Mike Leigh in the film!

Mike Leigh is back to the kitchen sink style, which he is famous for in such films as Secrets & Lies (1996) and others. The plot about aging is untraditional, it doesn’t really have a typical beginning, middle or end, it’s more like real life, and I’m not even sure the characters “grow” as they would in other films. Some will no doubt complain that not enough happens, I welcome filmmaking that doesn’t follow a set formula. Mary (Lesley Manville in a fine performance) is going through a mid life crisis of sorts, so maybe it can be compared to a film like Greenberg (2010), only with a British sensibility as opposed to an American.

It felt like a fly-on-the-wall experience. We observe an average family going about their daily business during a year of their life. Has some funny moments, not least the names of Jim Broadbent (Tom) and his wife (Gerri). Try and put an “and” between their names and you’ll see what I mean ( :

A weakness I found was the initial scene with Gerri talking to the unhappy woman at work, this part was never really resolved. You could also argue the film is a little bit black and white with the happy couple on the one side, and the unhappy friends on the other, which Alex at boycotting trends pointed out in his review. the director could have added more conflict in the relationship between Tom and Gerri, I agree, although I think it may be more of a tacit examination of their marriage. 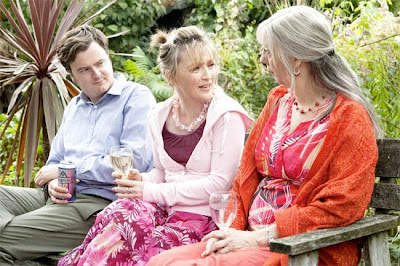 You wonder if Tom and Gerri have enough or even too much time to just be happy by themselves, do they need more conflict from the outside to feel alive? I couldn’t help comparing their predicament a bit to It's a Wonderful Life (1946), and James Stewart’s struggle of trying to get away from his roots, and if in fact getting away would be more meaningful or not. Does comforting and helping their friends and family give Tom and Gerri the ultimate fulfilment? Or are they neglecting their own individual goals in order to assist their troubled friends? I think it's fairly realistic that Tom and Gerri are essentially one person, sharing a similar demeanour after many years of living together.

Gerri being a therapist and having a warm and inviting personality probably makes her think of others before herself, so in some ways it’s a portrait of a modern day therapist’s personal life.
Can Gerri distinguish between work and spare time? She and her husband have the allotment to escape to, and I almost feel this is a sanctuary from all the problems they face on a day to day basis, both work and demanding friends. What do Tom and Gerri really want is interesting to me. Do Tom and Gerri help others to avoid thinking about themselves, or are they simply kind? Now that their son has grown up, are their circle of friend's problems a substitute task to occupy them? The poster I like a lot, I think Tom and Gerri support their friends and family like a tree trunk supports its branches.

Mike Leigh talks about in an interview that the story is about the moral dilemma, of where do you draw the line if you are generous to somebody, and they over step the mark, do you close the door? Or do you try and be sympathetic?

Tom and Gerri are not prejudice, they have room in their hearts for others, their house is a safe haven, where friends can go and not be rejected.

Mary and Ken are ambiguous characters, is Mary's exhausting behaviour and Ken's heavy drinking and lack of self-respect the reason they are forever singletons, or have they just been dealt an unlucky hand of cards in life? Probably it’s a bit of both.

The final scene is open-ended, will Mary go with Ron up North, will she get her life together, or is there no hope? Is Ron quiet all the time, or just for the moment, is he really sad about his wife’s death, why is Ron's son so rude? In an interview the director says the film is both pessimistic and optimistic, whatever you decide to take away from the experience. 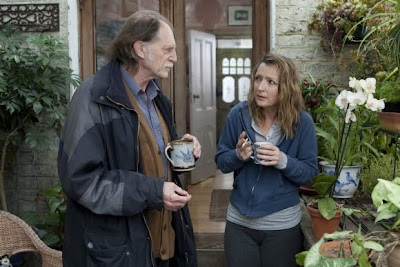 I can see myself returning to Another Year again and again to further delve into my questions posed above. Similar to bloggers jump_raven and Erin, I prefer Mike Leigh's films directed from Naked (1993) and onwards. I saw his work in the late 80s and early 90s, but was not my cup of tea.

I think Another Year proves Mike Leigh keeps getting better and better, and that is a rare thing for a director. Yes, he has had a few minor hiccups over the course of his career, but what filmmaker hasn’t?

I may be biased, as I love compassionate and heart-warming films like this. Overall, I think there is more to Another Year than meets the eye. I urge you to go and see it.


Readers, any thoughts on Another Year?
Posted by Chris at Monday, February 28, 2011