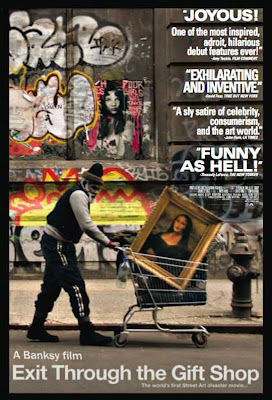 I enjoyed the playful Oscar-nominated documentary "Exit Through the Gift Shop". I wasn't quite sure what to make of it afterwards. Certainly lingers in your mind.

About how we define art. What is art? Who should be allowed to create it? Who owns it? What is the purpose of art? Can anything be considered art, and has the word become meaningless? Has hype triumphed over talent in the art world? Is art more intriguing, the less (or more) you know about the artist? All these philosophical questions are indicated tacitly, we get to think for ourselves.

Besides being art about art, the doc also works as a glimpse into the world of street art and graffiti artists, and how they create, think and operate.

I think Mr. Brainwash's (Thierry Guetta’s) actions raised some interesting questions. If you mainly make art for money, is that always bad, if people like it? Art doesn't need to be original or even good, for some it's all about what's hot. Can good art be created out of this system?

But I doubt his art will have a lasting value, so in that way I think he will lose in the long run, but you never know, art is a fickle thing. Just look at Andy Warhol, he could get away with anything just by adding his name to it ( : 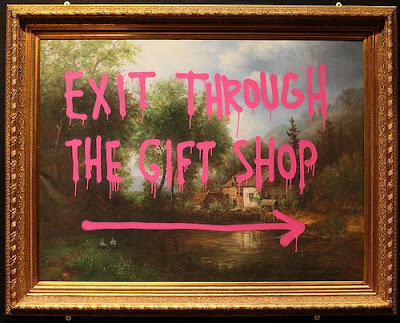 I recently read a youtube-thread about a singer's voice, although technically good, was emotionally boring. If there's no passion, or a feeling of rip-off, it will kill some of the audience. Kind of the same thing with Mr. Brainwash, who is clearly mass-producing imitations of Warhol. Although, as art is always subjective, some meaning can always be attributed to something.

The doc has also sparked a debate about the enigmatic and reclusive artist Bansky, who maybe, or maybe not directed this film as a hoax. I would have to see it again, to make my mind up about that. Probably only he knows himself. Bansky definitely keeps the mystique surrounding his identity alive. You can no doubt compare it to Joaquin Phoenix's I’m still here (2010), but something tells me we won’t get a definitive answer anytime soon considering Bansky’s record. As it might be a mockumentary, we are not sure Mr. Brainwash even exists! This obviously adds to the recent hype of the documentary. You could argue it doesn’t matter if its true or not, as the film either way is rewarding. Then again, as my blogging buddy the audient points out, every documentary ever made editorializes. Merely the act of choosing what footage to show is distorting reality.

I recommend reading the message board on IMDB for more on the ambiguities.

Highly recommended, and good luck at the Oscars! It may be too controversial to win? Who knows.

By the way, if you’re interested in the nature of art and mainstream entertainment, you should check out my review of Torture the artist
After watching Exit through the gift shop, the line between art and vandalism has definitely become blurred for me!

Email ThisBlogThis!Share to TwitterShare to FacebookShare to Pinterest
Labels: Documentary review, Exit Through the Gift Shop