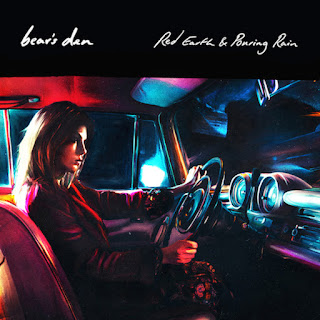 61.)
Smile More by Deap Vally
Garage Rock. Thanks to Sun Dried Sparrows for the tip. The lyrics are what got me hooked.

62.)
Red Earth and the Pouring Rain by Bear's Den
Alternative/Indie. Thanks to Derek at Past and The Pending for the recommendation. The album artwork (pictured above) fits perfectly with the music, retro 80s suitable for the road.

63.)
It Means I Love You by Jessy Lanza
Synthpop. The album is overhyped, but the drum and synth combo here is quite primal and bewitching. In the video she wears the golden gown from the album sleeve.

64.)
Fire by Justice
Nu-Disco. Had me pressing replay. Seems these guys have a Thelma and Louise fixation. I guess Geena was busy.

65.)
Open Your Eyes by School of Seven Bells
Dream Pop. A wake-up call to face life again. From their fourth (and final) album. The band’s career tragically cut short by the death of Benjamin Curtis.

66.)
Red Wine by Common
Conscious Hip Hop/Neo-Soul. A track that I didn't even listen to the words of. Just a very smooth sound. I'm sure he has some interesting lyrics if you dig a little deeper. "Get comfortable".

67.)
In God's House by Bat for Lashes
Art Pop. A concept album about a woman going through a tragedy on her wedding day. This single is atmospheric and the video dream-like.

69.)
Why Did You Separate Me from the Earth? by Anohni
Art Pop. Can you guess if the singer is male or female? The androgynous voice, appearance and name is part of the performance. I've read the lyrics are about human beings vs the natural world. A powerful song. The mobile phone video is fanmade and irrelevant.


Find anything you liked? Already know some of these? Which are your favorites from these albums? As always, comments are welcome. Tracks 60-51 coming soon!
Posted by Chris at Tuesday, February 14, 2017