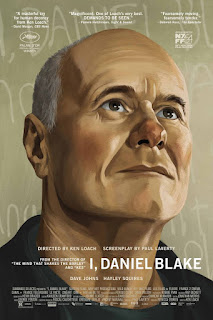 I, Daniel Blake (2016)
You know what you are going to get politically with a Ken Loach film, it's no secret he is left wing and fights (much like Charles Dickens did) the cause of the lower classes. His latest, which is rumored to be his last, could be Loach's most insistent and powerful, which addresses how poverty is also becoming an issue for the middle class and that the structure of the welfare system in the UK needs simplifying and humanizing.
9/10

Manchester by the Sea (2016)
As Kenneth Lonergan’s previous film Margaret, the story felt novelistic, many characters and storylines, but on this occasion not as interesting and rather simplistic.
Having a job as a plumber/handyman is not easy when tenants sometimes behave disrespectfully. Some of the sad or confrontational scenes had a dash of humor, thanks mainly to the teenage son, otherwise it would have been too melancholy.
A man dealing with grief and detachment has been done before. Captivated me in patches. The most powerful scenes to me are when he meets Randi with the pram and she break down, and there is a surprising development in the middle of the film than I didn’t see coming. The flashback chronology was a little confusing and I could have done without the constant swearing. A well-acted film, but not a favorite.
7/10

Nocturnal Animals (2016)
Beautifully shot and well-acted. Amy Adams looks stunning. The fragmented story was sometimes thrilling during the road rage, yet also unsatisfying with a number of loose ends. Michael Shannon was almost unrecognizable and his performance stood out. Perhaps what I’ll remember most is the anti-smoking propaganda inserted into the screenplay. The film lacked a consistent tone, and while it was cleverly told, the story left me cold.
6/10  (changed to 7/10 as of 10 Feb)

David Bowie: The Last Five Years (2017) (documentary)
I was confused by the title The Last Five Years, as the documentary jumps back to the 1970s quite a lot and addresses how he handled fame. The film opens with an examination of the Reality tour, which was a joyful time, yet also took its toll. The middle part of the doc looks into the album The Next Day (2013) with a number of revelations about the videos and lyrics. The idea he had for The Stars Are Out Tonight video is celebrities stalking normal people to study them, Tilda and David playing the normal couple, with a transformation occurring so the normal become celebs. Valentine’s Day apparently is a song about a serial killer at a school and the lyrics are from the point of view of the killer, a statement about gun control.
Finally in the last 30 min the focus is on Bowie's deteriorating health and burst of creativity that led to a musical and the Blackstar album.
8/10

The French Lieutenant’s Woman (1981)
Meryl Streep‎ as Sarah does mysterious well, so the audience wants to get to know her. She is complex and difficult to understand, and that’s what makes her character fascinating. Charles (Jeremy Irons) is convincing as her bewildered pursuer and their journey is the most compelling aspect of the film.
The perspective of the servant life is given its due, and in some ways it's a story designed for us to empathize with their hardship. Charles' servant Sam is frustrated by the uncertainty of his job and other servants are not able to live a happy life because of strict, bullying employers such as Mrs. Poulteney. The jumps between eras was confusing (on first watch) and the modern narrative less memorable.
The film-within-a-film reminded me of Truffaut’s Day for Night (1973), only The French Lieutenant's Woman is more emotionally involving. Truffaut’s film on the other hand does a better job of showcasing the compromises, difficulties and everyday life of shooting a film.
9/10

Bronson (2008)
Biopic based on the life of notorious English criminal with nickname Charles Bronson. I couldn’t look away from his craziness. The first 30 min when he is imprisoned is the most gripping. The scene when he takes a librarian as hostage had suspense for its unpredictability, but maybe they shouldn’t have repeated that. A questionable decision to make entertainment out of his vile behavior. You can debate if the jail time made him worse or he was always a troublemaker. The worst kind of celebrity, wanting to be famous, even if it was for being bad. The audio intro (on the dvd) suggests he’s not proud, but not ashamed of what he’s done. I forgot to mention Tom Hardy, who delivers an award worthy performance. When he smiles and then does a stone face is both creepy and somewhat comical.
7/10


Bread and Tulips (2000)
A light comedy from Italy. Very sweet. Licia Maglietta's charming lead performance makes me want to look up what other films she's done. If you are stuck in familiar routines, a story that could inspire you. About a housewife who takes a spontaneous holiday to Venice. I feel this film should be better known. The Bruno Ganz scene with the tulip petals falling off is unforgettable, although I'm not too sure why bread is in the title? Won several Italian film awards.
8/10

Baronessen fra benzintanken (1960)
Considered a classic of Danish cinema, but to me weaker than its reputation. A couple of amusing scenes when the water pipe bursts in the bathroom, and the party when Dirch Passer eats the oyster. Another fun moment at the party is when the servant announces the guests and someone says he ‘already knows his own name’. But a few scattered laughs does not make a great film.
There was not enough story and the pacing was too slow for a comedy. I lost patience several times and fast-forwarded until something happened. 122 minutes was way too long. Ghita Nørby is one of Denmark’s most prolific and recognizable actresses and this performance is among her signature roles. Her character is quite charming, although it was Dirch Passer in a supporting role who I think gave the most memorable performance. The special effect of the ghost was impressive when you consider the film is from 1960.
4/10

Frøken Nitouche (1963)
Another classic Dirch Passer film I knocked off my list. A sweet but predictable period musical comedy. Based on the operetta Mam'zelle Nitouche, first performed in 1883. Sometimes I rolled my eyes at how dated it is. There are a few sporadic laughs, especially when a man chases after Dirch Passer with a sword because he made passes at his lady friend.
Favorite quote:” I can’t stand the sight of blood, especially not my own!”
6/10

Olsenbanden i Jylland / The Olsen Gang in Jutland (1971)
Some fun ideas, going to a new location outside of Copenhagen without paying for petrol, Egon using diving equipment to access the bunker, and the trio stealing a train. The usual one-liners are there which audiences expect from the series. There's suspense and even though they're crooks you want them to find the gold.
The storytelling has some flaws, too contrived that all these people happen to be looking for the treasure at the exact same time. A villain fires countless gun shots and keeps missing, that's implausible. I found the humor to be a bit juvenile, but there is a certain charm to these characters. The military is made fun of which is quite amusing.
To me, the differences between Sjaellanders and Jutlanders is not explored enough. Jutlanders are not all bonderøve/hillbillies and the script does little to dispel that fallacy for the viewer. Surely Karl Stegger's character could have looked for the gold ages ago and not just because the gang are passing by. The filmmakers decided to focus mainly on action sequences and that is what works best. As someone who lives in Jutland, visiting the filming location at Vigsø Bugt, Hanstholm is now on my bucket list.
6/10

Gasolin’ (2006)
A rather superficial documentary about arguably Denmark’s most famous rock group of the 1970s. A few interview clips with the band members, but not as a group. Too much focus on their unsuccessful America tour and not enough focus on the actual albums. Most interesting were the parts about the early years and how they started.
5/10

Any thoughts on these films and reviews? As always, I'd like to hear what you think in the comments.