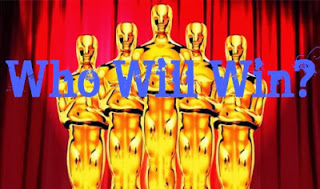 The Academy Awards are on February 26th (Sunday night) and below are my predictions:


BEST DIRECTOR: Damien Chazelle
Damien Chazelle is favorite, so I’ll go with him. He should have been nominated for director for Whiplash which is his best film. Barry Jenkins has an outside chance for Moonlight.


ACTOR IN A LEADING ROLE: Casey Affleck
Denzel Washington is the joint favorite, but he’s won a couple of time before. The assault allegations may hurt Casey Affleck's chances with voters. Even though I didn’t love Manchester By The Sea, I think it's the kind of oscar-baity role that will win. Fences winning for both Davis and Washington might happen, especially with #OscarsSoWhite controversy of last year. Could there really be three black actors winning in the four actor categories? I don't see it happening, so my money's on Affleck.


ACTRESS IN A LEADING ROLE: Emma Stone
Emma Stone for La La Land is the betting favorite. I hope Isabelle Huppert surprises like she did at the Golden Globes, and it would be justice because Elle was snubbed for a Foreign Language Film nomination. Popular Jennifer Lawrence beat veteran Emmanuelle Riva, and I expect the same thing to happen here with the crowd-pleasing Emma Stone beating the darker, subtle work of Huppert.


ORIGINAL SCREENPLAY
Manchester by the Sea to win. Hell or High Water and The Lobster are more original though, so I hope one of those can pull off an upset.


FOREIGN LANGUAGE FILM: Toni Erdmann  WINNER: The Salesman
A difficult category. Not a clear favorite. Front runner Toni Erdmann has won precursor awards. The Salesman has picked up steam due to Iranian director boycotting the Oscars in protest of Donald Trump’s refugee ban. I’m sticking with Toni Erdmann. Asghar Farhadi won for A Separation just a few years ago, a film that has some similarities to The Salesman.

COSTUME DESIGN
Jackie  WINNER: Fantastic Beasts and Where to Find Them

DOCUMENTARY (FEATURE)
O.J.: Made in America was riveting to watch, although did voters sit through all 7h 47m?

Will you be watching the Oscars? What are your predictions in the main categories? Which are your favorites of the nominees? As always, comments are welcome
Posted by Chris at Friday, February 24, 2017