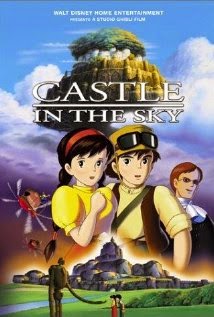 Japanese animated feature. Certainly the most mainstream and action/adventure orientated of the Miyazaki films I’ve seen. The chase story is reminiscent of Indiana Jones.
There’s definitely a little social commentary, that we shouldn’t misuse the earth’s resources for selfish reasons, which in the film is in the shape of the powerful crystal weapon, which comes from the earth.
Pity about the overlong running time of over two hours, which is quite common for Asian productions.

While My Neighbor Totoro (1988) and The Wind Rises (2013) I was moved by emotionally and felt suitable for both young and old, Castle in the Sky left me unmoved, and I would say the target audience is younger than I am.
Wonderful animation, average characterization and story. The situation is really just goodies vs baddies. The film is not bad, but I guess I expected more considering it's ranked  in the IMDb top 250. My least favorite Miyazaki film so far.
Rating 6/10

Have you seen Castle in the Sky or other Miyazaki films? Are you a fan of his style?