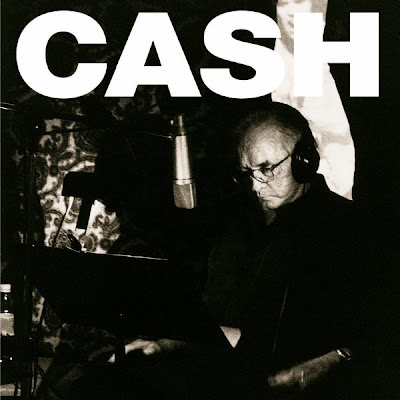 American V: A Hundred Highways is a posthumous album by Johnny Cash. The quality of the vocal is all the more remarkable because Cash was in very poor health.

Producer Rick Rubin, in linear notes of album sleeve:
“I could always tell how Johnny was feeling each day from the sound of his voice and his breathing. Some days his voice was weak and he sounded like he was panting, trying to get enough air. Other days his voice boomed with power and gravity. You can hear the difference on some of these songs…Sometimes he booms and other times he sounds weaker and more vulnerable”

After your mum (June Carter Cash) died, he (Johnny Cash) went back to recording pretty quickly.
John Carter Cash: He (father) went back into the studio ten days after she died, and really started working hard. It’s a life lesson that a parent’s motto is “Press On”. That was the title of mom’s record, Press On.

Yeah, and your dad wrote a song called “Drive On”
Yeah, Drive On”. There’s a lot to say that in the face of pain and misery or struggle, you don’t stop”
He recorded up until two weeks before he died.

Rubin: “I think of songs for him all the time. There was one that we were planning to do for the next album, that we hadn’t gotten to yet, and I’m sick about it “A Place in the Sun” by Stevie Wonder. I envisioned that as the greatest Johnny Cash song ever. I played it for him, and he was down for doing it when he got to California. But he died the week before he was going to come”

The album takes its name from a lyric on the track "Love's Been Good to Me" by Rod McKuen; the opening verse begins (emphasis added):
I have been a rover
I have walked alone
Hiked a hundred highways
Never found a home

Even in death, Johnny Cash topped the Billboard 200 with the album American V: A Hundred Highways. It is his first No. 1 album since 1969's Johnny Cash at San Quentin with 88,000 copies sold in the United States, according to Nielsen SoundScan.


If You Could Read My Mind - Johnny Cash (Lightfoot cover)


Further On Up the Road - Johnny Cash (Bruce Springsteen cover)

What did you think of the music? Any thoughts?