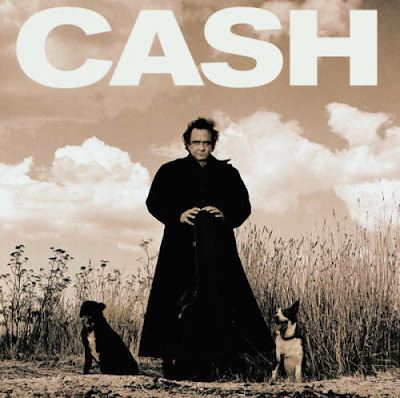 In his 48 year career, Johnny Cash recorded a boatload of albums, so obviously I haven’t listened to the whole catalogue. Few people have! I will mainly be sharing his music from 1994-2006, which I find to be his most personal work.

In 2003, American Recordings (1994) was ranked number 364 on Rolling Stone magazine's list of the 500 greatest albums of all time. The album cover was photographed while Cash was visiting Australia, at Werribee near Melbourne

The second and sixth American recordings LPs are probably my least favorite of the six albums, so I'm skipping reviewing those two.

As with other greats in music, Johnny Cash didn’t need a real picture, a silhouette was enough to recognize who he was. His career was tough to pin-point, his music ranging from country, gospel, blues, rock n roll, acoustic, pop. He has been called an architect of popular country music. 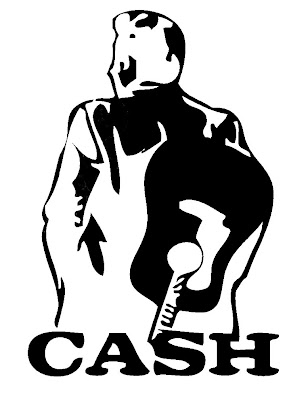 You might say he captured the heartbeat of America. Johnny Cash stood up for the underdog. That darker, imperfect, uncontrollable side of Cash has drawn generations of fans to him.

In the Rolling Stone biography, he is quoted: “I believe what I say, but that don’t necessarily make me right”, he says, laughing. “There is a spiritual side to me that goes real deep, but I confess right up front that I’m the biggest sinner of them all”

He even views his battle with drug addiction in spiritual terms. “I used drugs to escape, and they worked pretty well when I was younger. But they devastated me physically, emotionally and spiritually”

Despite the popular myth, Cash never did time in prison, but his sympathetic plight for inmates inspired him to play for them. He sang like he cared about the prisoners in jail.

Johnny Cash didn’t have it easy. Towards the end of his life he suffered from glaucoma, diabetes, a fractured jaw, and had bypass surgery. In 1997, he announced he was struggling with a nervous system disorder, called autonomic neuropathy.

Producer Rick Rubin was the man behind the board for Beastie Boys, Slayer, and The Red Hot Chilli Peppers, co-founder of Def Jam records, a hip-hop institution. Rubin noted: “Johnny was made fun of in Nashville for working with me. It seemed ridiculous to that audience. But he saw the seriousness of what we talked about and could do together – enough to go against those feelings” Cash had the last laugh, American Recordings received a Grammy for Best Contemporary Folk Album of the Year at the 1994 Grammy Awards.

Together, Cash and Rubin gave birth to albums that artistically and commercially rejuvenated Cash’s career by letting him sing cover songs. Both traditional folk and gospel songs of his youth, and surprising contemporary choices. One of the strengths of the recordings was they took a lot of songs from outside people’s expectations.

The American recordings albums helped Cash discover a voice suitable both to a man of his age, disposition, accomplishments, and to contemporary times. It's a voice that grabs you by the throat, and says, listen, I've got some of life's stories, I've lived these things, I'm going to tell you what life is about, and you believed it was a voice of wisdom.
Cash had the unique ability to make the music his own, and the stripped-down acoustic albums created a renewed interest in what some had regarded as a washed-up country singer.

Johnny Cash: “I can’t sing it, if I don’t like it. But he’s (Rubin) come up with some really fine songs, and he never pushed anything on me. We get along beautifully”

Rick Rubin: "What gave me the idea I could and should produce Johnny Cash? There’s no good answer to that, it just felt like the right thing to do. I’d been thinking about who was really great but not making really great records, what artists are not in a great place right now. And Johnny was the first and the greatest that came to mind”
It was the outlaw side of Johnny Cash that had first attracted Rick Rubin: “He didn’t fit the rules of society. He had this dark side. He was a country artist, but not really a country artist, you know? I saw in him the essense of what rock n roll is.”

Rick Rubin: “But unlike gangsta rap, Johnny Cash doesn’t sing carefree about violence. He always has to live with the darkness of what he’s done. There is always remorse and he is haunted by his deeds. He aligns himself with the prisoners and the outlaws of the world”

Johnny Cash’s son, John Carter Cash: "What Rick basically said was that my Dad could go record all the songs he ever wanted to do, go right back to his roots if he wanted, and he would be there just to enjoy the music with my father. That he would bring some songs for my Dad,but Dad could run with his own spirit and do whatever he wanted to do”

The songs on American Recordings were as stark, dark and elemental as the stunning cover photo, Cash in a wheat field, in a long black coat, windswept black hair, leaning on his guitar case like a preacher on a lectern.

Rick Rubin: "When Johnny sings it, all of a sudden it becomes a different song. It has a different weight to it when he sings the lyrics. He has a way of personalizing and communicating the emotion of the lyrics that very few people have. I remember Glenn Danzig saying, It’s his song now. I wrote it, but it’s his now, after hearing Johnny sing ‘Thirteen’ for the first time."

The album was praised by critics and many declared it to be Cash's finest album since the late 1960s.

If it’s cool, wrote MOJO in a review, it’s because it manages both to be truthful and confessional while also making Cash look and sound as big as a monument.

Rolling Stone gave it the full five stars: “Not a feeling is flaunted, not a jot of sentimentality is permitted, but every quaver, every hesitation, every shift in volume, every catch in a line resonates like a private apocalypse”

The video for the first single, the traditional song "Delia's Gone," (directed by Anton Corbijn and featuring Kate Moss) was put into rotation on MTV, and even appeared on Beavis and Butt-head (Beavis asking if Cash was Captain Kangaroo).

What do you guys think? Do you prefer Cash's music from the 60s, or during the American Recordings era (1994-2010) ? Share your comments below