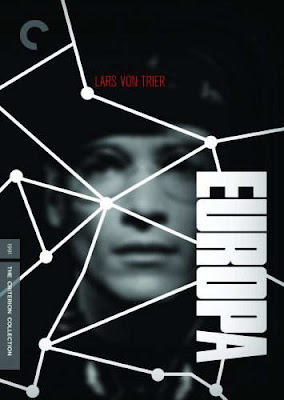 My review is a contribution to the LAMB Lars von Trier director's chair event July 16th. I will post several more Lars von Trier film reviews during July, as he's one of my favourite contemporary directors.

Summary:
Europa (retitled Zentropa for the American release) is an hallucinatory Danish film. The story is about a young American, who arrives in post WW2 Germany in 1945 to help rebuild the country after the war. The country is in ruins, and he becomes a train employee, his uncle is his mentor.
Leo Kessner (Jean-Marc Barr) is the young man who aspires for a job as a street conductor. Leo's adventures on the line are designed as a metaphor for the emergence of the "New Europe" following the war. 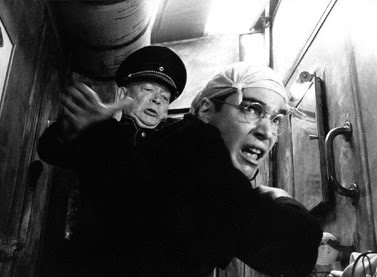 Analysis:
This experimental film left some viewers confused, which may be why English-language prints of Zentropa are narrated by Max von Sydow. The hidden voice-over of Europa is outside the fictitious area, but at the same time has a hypnotic bond with the main character, controlling him. In Europa, for all intends and purposes Leo is living his life in a hypnotic state. The voice-over spoken by Max von Sydow could be interpreted as the voice of death.

As is characteristic of the E trilogy, The Element of Crime (1984), Epidemic (1987), and Europa (1991), the main characters all offer their services for idealistic reasons. Neither Fisher in The Elements of Crime, or Leo Kessner in Europa, can be described as strong willed individuals. On the contrary, they are being controlled, and become pawns for other people’s plans. Leo wants to do good, but causes the opposite. He is innocent, because he doesn’t know any better being from overseas. He is a tourist, as Katharina says.
Colonel Harris (Eddie Constantine) is an opportunist, and represents the interests of the allies and the American values. Germany is to be rebuilt, yet it should also be a profitable business. Harris wants capable people on his side such as Katharina Hartmann (Barbara Sukowa) pictured below.

Katharina is what is known as the femme fatale, an attractive and seductive women you cannot entirely trust, who may lead you into trouble. In the 1940s, Lauren Bacall often played this part.

The film distances itself from a documentary description of Germany by letting the dialogue be spoken in English, and the title tells us the story is about Europe, not just Germany.

Trier’s main interests on Europa were the technical challenges, which mainly were to do with photography. The brief colour shots typically marked emotional moments, Leo’s love for Katharina, or Hartmann’s guilt. Lars von Trier goes back to old filmmaking techniques such as projection, which are reminiscent of cartoons. Front projection is an illusion breaker for the audience, reminding us that it’s just a film.

Scenes resemble post war Germany, yet here and there the look is exaggerated. The train is more than a train, its Germany on a journey, and populated with refugees, POW’s, and Jews returning home. The destroyed cathedral represents aesthetically speaking the disintegration of the country.

The hypnotic flavor of the story makes it just as much an inner as well as outer journey, about Leo’s hopes, fears and anxieties, and about the European mentality. Often times when Leo is in doubt, back projection is visible.

Lars von Trier puts forth unusual insinuations, that Europe and Germany are dream spaces where nothing seems to make sense. The train journey points to a the journey through life we take towards are inevitable death.

Europa was von Trier’s attempt at the melodrama, a big emotional love story with great deception set up against a big event of world history. Europa goes in for the classic melodrama theme of exaggeration, for example the large amount of blood that spills out of the bathroom door. The music with its passionate pathos is also melodramatic. The film contains elements of thriller and comedy as well.

A weakness of the film might be that it doesn’t really analyze Germany or the German people.

The message:
Asked to describe what binds the Europa trilogy together, von Trier answered: "An idealistic person arrives in circumstances he can’t control. The three films are for me an attempt to sketch out a big painting of Europa, which say a lot about this continent. (...) The idea that people will take the trouble to co-operate and work for the good of their fellow man is deeply naïve. That’s probably what Europa was trying to express."

Interview about the film:

Lars von Trier: “We’d worked out that we were going to do something that we called the Europa Trilogy. We thought it was a good name. And in the trilogy there ought to be a film called Europa. Niels Vørsel (co-screenwriter) was very keen on Kafka’s America, which is about Europeans arriving in America. Here we have an American visiting Europe."

Interviewer: How come you wanted to make a film about Germany after the war?

Lars von Trier: “Because there aren’t many films dealing with that period. The defeat is interesting to deal with, the mechanisms that develop in the aftermath of a defeat. I was inspired to make Europa by several other films, most notably Visconti’s The Damned, which I thought was a fantastic film. The idea of the family and how it functions and the internal relationships and conflicts all stem from that, really. (...) I also thought it would be interesting to make my main character a sleeping-car attendant, building up his personality around a real job. Niels Vørsel (co-screenwriter) had worked on the German railways, not as a sleeping-car attendant, but as a conductor, so he had inside knowledge of the industry. We had a lot of fun going through all the rules and regulations of the job, and they’re correctly cited in the film. A lot of research went into Europa. I used to play with a model train set when I was little, so I was fascinated with this world surrounding the sleeping-car attendant”

Lars von Trier: “I can’t say that I consciously set out to deal with it as a subject, because I don’t think like that. (…) But I’ve never had any ambitions towards political analysis or analysis of the concept and consequences of power – none at all.
What interested me most in Europa was how this sort of unformed, shapeless central character ended up in this inflamed situation. Europa, as we’ve said, is the third part of a trilogy, and the film really tells the same story as The Element of Crime and Epidemic: how an idealist with the best intentions ends up in a catastrophic and intractable situation, and how he’s the one who unleashes the catastrophe. There! That’s the story.
Katarina Hartmann in Europa also illustrates an interesting theory, when she suggests that it’s the people who haven’t made up their mind, the neutrals, who are the real villains. Looked at in that light, you can see most humanists as villains, because of course, they maintain a neutral position. For them, there’s no such thing as pure goodness or evil, whereas people who fight see good in their own cause and evil in their opponents.” 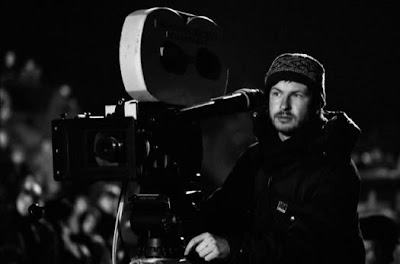 Lars von Trier: “If the film has got any political content then it’s that it adopts an almost anti-American attitude. The story takes place in the American zone, and we get to watch the intrigues that take place there. The film makes quite a lot of insinuations in that direction.”

Lars von Trier: “All the others were like wild animals waiting to pounce on him. Jean-Marc Barr (the main character) contributed a sort of innocence and naivety that I liked.”

Lars von Trier: “Because humanism is based on a fairly naïve concept. I still think humanism is a good basis for possible co-operation here on Earth. But there’s a lot of fiction in humanism. The idea that people will take the trouble to co-operate and work for the good of their fellow man is deeply naïve. That’s probably what Europa was trying to express.”

Lars von Trier: “I think it was too polished. It lacks what I would call ‘natural mistakes’, the sort of thing that’s more obvious in Breaking the Waves. They’re very difficult to put together. Europa is far too insipid and vacuous in that respect.”

Lars von Trier: “It was just that everything else, the technical side of things, was more important at the time. I just wasn’t interested in actors” 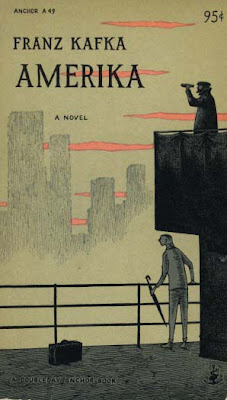 Trivia:
The storyline has more than a few similarities with Kafka’s novel America (1927), among others that a young man in a foreign country is received by his uncle whom he doesn’t know.

Lars von Trier wasn’t interested in making a historically accurate depiction of Germany, but in depicting his dreams about the era, however he did consult with historians for the project. The train aspects were correct, in that the train schedules resumed in 1945 after the war. On the other hand, its incorrect that war compensation was paid to the Scandinavian countries.

The exterior shots in Europa were filmed in Poland, a third of the trains still ran on steam at the time, this made it possible to significantly reduce production costs.

It was during his work on Europa, that Trier in April 1989 learned on his mother’s death bed, that his father was not Ulf Trier, but another man. In other words, he was not a Jew, and he was not a Trier.

The film is available as part of the Criterion collection

Verdict:
For all its technical and aesthetic brilliance, Europa (1991) remains a film that is easy to appreciate, but difficult to love. The highly stylized atmosphere keeps viewers at an emotional distance, but it establishes a consistent, visually captivating mood.

What do you guys think? Was my review useful? Have you watched Europa (1991)? Share your opinions in the comments below

Next, I will look at the Breaking the Waves (1996), which is considered by many to be Lars von Trier's international breakthrough to a wider audience.
Posted by Chris at Saturday, July 07, 2012