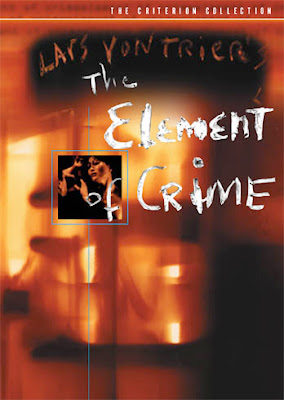 This review is my contribution to the LAMB Lars von Trier director's chair event July 16th. I will post several more Lars von Trier film reviews during July, as he's one of my favourite contemporary directors.

Summary:
The narrative is quite tricky to follow and may frustrate audiences, it's hard to say what is reality and what is not. Police inspector Fisher is contacted by a therapeutic hypnotist in Cairo, where he has resided for the past 13 years, in hope of reliving a journey Fisher took two months previously in Europa.
In a dystopian environment, Fisher investigates a serial killer suspect using controversial methods written by his now disgraced former mentor Osborne.

The film is a memory trip via hypnosis about this journey into a dark and flooded Europa, which looks to be falling apart. Fisher is “fishing” for an answer.

The theme of The Element of Crime seems to be obsession. Fisher’s manic attempt to find Grey (in himself?), to become Grey, to be his mirror image, not just to solve the crimes, but to achieve a personal redemption.
There are some pressing questions during the story. Why has Fisher been called back to Europa, when the police don’t like him? Why has Kim abandoned her child and returned to Frau Gerdas brothel? Does Harry Grey exist? Why can’t Fisher wake up from the hypnosis? 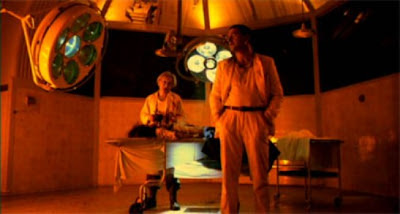 Analysis:
The Element of Crime is an experimental and symbolic European art film with its own dystopian mood, far removed from everyday life. Ironically, the future looks older and worse than the present. It works more in terms of a fascinating atmosphere than a strong plot. The director has called the element of crime a film about film, and the meta fiction references are there to observe. The apocalyptic mood is comparable to other films of the period, Ridley Scott’s Alien (1979), Blade Runner (1982), David Lynch’s Eraserhead (1977) or Andrei Tarkovsky's vision of a wet and crumbling world, with nature as a seemingly divine presence, films such as The Mirror (1974) and Stalker (1979) are possible influences. Tarkovsky's Solaris (1972) , about a man on a haunted space station, who learns more about himself than the place he is at, is similar to the journey of Fisher in The Element of Crime.

The Element of Crime (1984) is Lars von Trier's debut feature-length film. The scenes are jam-packed with objects and scenery, which confuse in terms of the era depicted and the locality. Is ‘Europa’ Europe, or isn’t it? The impression is the story takes place in a dream, where all the elements are symbolic. The skewed camera angles further complicate matters and make us even more disorientated.

Several large-scale visual scenes don’t feel vital to the telling of the story, which a character implies when Fisher is looking at people jumping from the tower: “It does not seem connected with the story, Mr. Fisher”

Another weakness with the script is, why is the lottery girl standing in a remote spot to sell tickets, where nobody goes to? 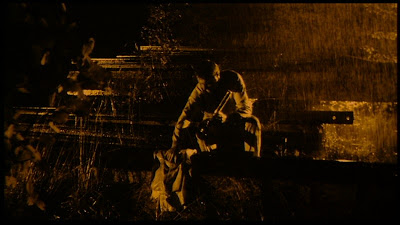 The permanently dark Europa with continuous rain is a universe coloured in a mysterious, yellow atmosphere. In the interior scenes a natrium light was used, a source of light that is usually used to illuminate car parks, which blocks out all other colours. The exterior scenes were shot in black and white, and later a yellow filter was copied onto colour film.

The film is futuristic, the spoken language is English, and the setting cannot be identified as any specific country in Europe. We are simply in Europa, the Danish word for Europe.

The message:
The message of The Element of Crime (1984) could be interpreted as pessimistic, that points towards the inability of the individual to reform the society, or serve the justice, or make any significant impact on the system. Inevitably the cop is doomed to get contaminated by a vile environment. 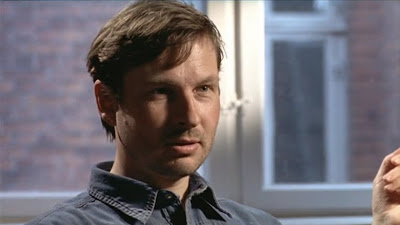 Interview about the film:

Interviewer: The film is called The Element of Crime, with the definite article in the title. Was there any particular reason for that?

Lars von Trier: “The title is linked to a book written by Osborne, one of the central characters in the film. The book is called The Element of Crime, and it proposes the thesis that crimes occur in a certain element, a locality that provides a sort of ‘centre of infection’ for crime, where, like a bacteria, it can grow and spread at a certain temperature and in a certain element – moisture, for instance. In the same way, crime can arise in a certain element, which is represented here by the environment of the film. ‘The element of crime’ is the force of nature that intrudes upon and somehow invades people’s morals.”

Interviewer: What do you think the film is about?

Lars von Trier: “The Element of Crime was an attempt to make a modern film noir, but a film noir in colour. I thought it would be terribly difficult, because there was a risk of it being far too coloured. I tried to counteract that in my use of colour and in the choice of locations. The film, after all, is filmed in a Europe that is under the threat of nature. I haven’t seen the film for a long time now…What’s the film about? Well, what can I say? There’s an element of intrigue with a couple of obscure ideas about switches of identity.”

Interviewer: There are also certain parallels between The Element of Crime and Touch of Evil, They both take place in a nocturnal no-man’s land, a border area between reality and dream – or rather, nightmare.

Lars von Trier: "The architecture in that room also contributes a lot to the sense of unreality in many of the locations. The walls are strangely angled and you can’t quite get your bearings in it.
We also added an oily patina and other reflective materials to give the impression that nature was taking over. Everything was damp and the walls were dripping. When I saw Alien3, it struck me that the environment it was set in was almost exactly like the one we created for The Element of Crime”

Interviewer: You could also see Fisher as a fisherman trying to haul in his catch.
Lars von Trier: “Yes, it’s possible that we intended that sort of association. But mostly we liked being able to give him the nickname Fish”

Interviewer: What do you think about these attempts to interpret your film?

Lars von Trier: “As soon as people come across anything mysterious, they start looking for a way of contextualizing it. But I can’t do that for them, because I haven’t got the answers myself”

Lars von Trier: “Creating the introduction was fun, and also the ending, but the bit in between wasn’t as much fun. The plot itself is fairly theoretical. It’s about one man, Fisher, pursuing another man, Harry Grey, a criminal, and during this journey he gets so affected by the fate of his quarry that he slowly begins to assume his identity. He assumes ‘the element of crime’ which governs Harry Grey, and makes it his own. (…) And in large parts of it the locations and the atmosphere are more interesting than the story”

Talking about his 80s films, Lars von Trier said that he allows himself to become fascinated by what has always fascinated people. Death, and unpleasant things. The kind of moral, now we shouldn’t let ourselves be fascinated by war, etc, he believes is a prison. You shouldn’t restrain yourself. Ugliness is a great source of beauty, significantly more interesting than something beautiful. Lars von Trier perceives his job as spotlighting things, which people normally do not have the courage to express for various moral reasons.

Trivia:
The Element of Crime (1984) brought von Trier international attention, winning the Technical Grand Prize at Cannes, and was also nominated for the Palme d'Or in 1984.

The original title was The Last Tourist in Europa, which is heard in a German translation during the final credits.

The film is available as part of the criterion collection

Verdict:
While The Element of Crime might be remembered more for the production design, visuals and atmosphere, Lars von Trier has put together a unique dystopian vision that was a promising debut feature, the first part of the Europa Trilogy (1984-1991). It probably appeals more to the arthouse crowd, but is a must-see if you are a fan of the uncomprimising director's work

What do you guys think? Was my review useful? Have you watched The Element of Crime (1984)? Share your opinions in the comments below

Next, I will look at the third part of the E Trilogy, Europa (1991). Skipping act two, Epidemic (1987), which had an interesting final scene, but I wouldn't recommend.