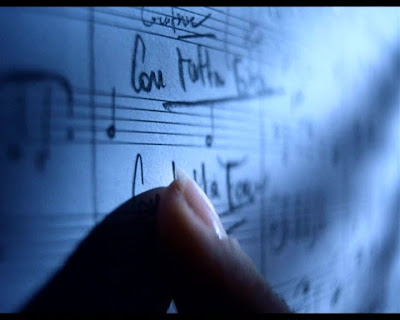 My review is intended for people who have already watched the film. Spoilers ahead.

Blue is the first part of the three colours trilogy about freedom, equality, and brotherhood, the colours on the French flag. So Blue is about freedom/liberty.

A drama directed by Polish auteur director Kieslowski, about how to cope with losing your husband and child. You could argue the main character Julie decides to repress her loss. The apartment she moves into does not allow children for example, and she takes next to nothing with her from her previous life. Due to the sorrow she tries to start over. Wanting to sell her house and all her belongings is no doubt a way of distancing herself from the past and trying to forget.

Julie moves to the city to do nothing. You wouldn’t think a film about a woman doing nothing would be that appealing, but the way the story is told, and the wordless visual style is very intriguing. The surroundings reflect her inner state of mind. Julie doesn’t want to commit to anything or have any obligations. She seeks freedom and isolation.

Perhaps the family of newborn rats in the bedroom remind her that there is still love in the world and life to be lived, Julie tries to be anonymous, but the real world is inescapably all around her. Julie requests a cat from a neighbour to get rid of them. The action of asking for the cat shows that Julie does indeed need other people. Her mother tells her in a conversation that you can’t give up on everything.

Several close ups were used, the intent probably to convey a subjective experience of the sadness of Julie. 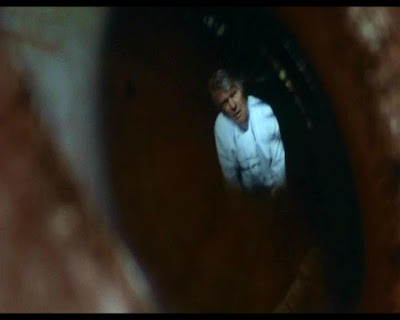 Interestingly, Julie swims backwards in the pool. My own interpretation is she is thinking back, about her life when her family were alive. 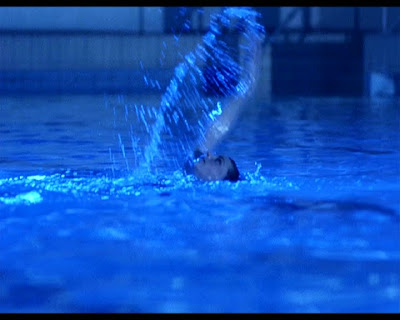 Is she green with envy is this scene, where she has just witnessed some kids messing around in the street? 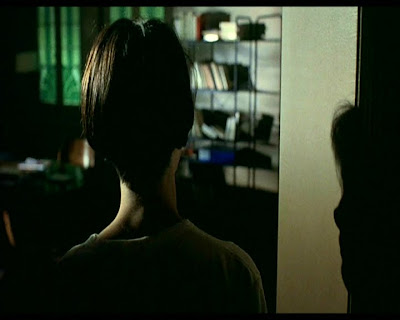 And is this screenshot an illustration of how the light in her life is limited due to sadness, and brightness can only reveal itself partially through the tree branches? 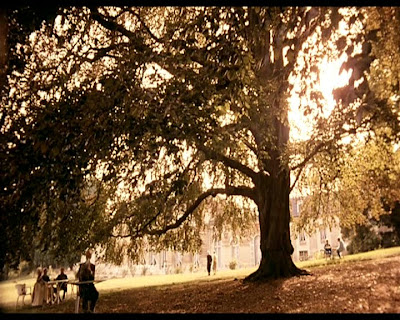 Julie’s mother likewise lives a pseudo existence in front of the TV set, not really living, and perhaps Julie can mirror herself in this numbness, and visiting below perhaps gives her the urge not to end up like her mother is? 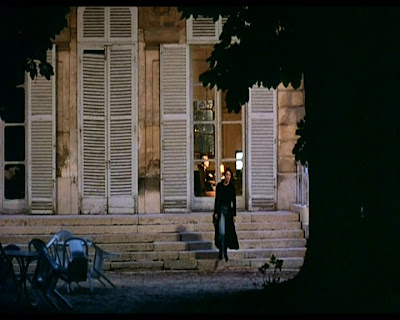 In an interview on my dvd, Kieslowski talks about the sugar cube scene, which represents Julie observing details, and not worrying about anything else. Absorbed in her own little world, wanting to simplify and restrict her world view. To show that nothing around her matters, people, or the man who is in love with her. 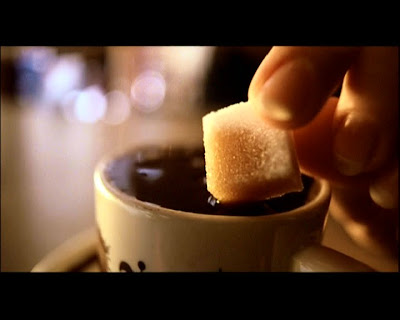 From the interview book Kieslowski on Kieslowski: “Blue is about freedom, about the imperfection of man’s freedom. How far does our freedom reach? (…) She is perfectly provided for – has plenty of money and no responsibility whatsoever. She no longer has to do anything. And the question arises: Is a person in such a situation really free?"
“But it turns out that you can’t liberate yourself fully from everything that was. You can’t do this, because sooner or later, fear or loneliness will surface, or as Julie for example experiences it, the feeling of having been let down. This emotion changes Julie so much, that she realizes, that she can’t live the life, she had expected. It’s the sphere of personal freedom. How free are we, when it comes to emotions. Is love a prison? Or is it freedom? Is watching TV imprisonment or freedom?“
"Did Julie just make the corrections? Perhaps she is one of those people, who is unable to write a single sheet of music, but who is excellent at correcting other people’s work. She sees everything, has incredible analytical skills as well as a gift of being able to improve things. The described sheet is not bad, but after she has looked at it, its outstanding” (translated)

In the dvd extras, the lead actress Juliette Binoche talks about how the film is like real life, seen through the eyes of Kieslowski. According to Binoche, her character’s decision to say no to everything was to make a clean slate of things without any emotion. It’s brave, but at the same time she in incapable of doing anything else. Julie tries to avoid having any feelings, because life has been so tough, and so hard to accept. She tries to move on with this huge burden. She keeps the blue beads, and together with the classical music they represent a link to the past.

Juliette Binoche was inspired by Annie Duperey’s book “Black Angel”, where Duperey writes about her parents, who passed away in an accident, when she was about 9-years-old. She couldn’t cry, which she describes in the book. Some of the quotes are very close to the female character in Blue. “I suffered enough on the inside, I didn’t need to show it”. And she said “I became someone, who said no to everything”.

The realization Julie reaches that you can’t live happily in complete isolation is comparable to what the retired judge Kern discovers in his outsider position in Red (1994) (the third part of the trilogy). Perhaps this particular message is a personal statement from Kieslowski, after completing the trilogy, he decided he no longer wanted to be an artist, a director, who watches the world from a distance.

You are only free, when you don’t want anything. What do you want to do with your freedom? Elias Canetti once said in the book The Secret Heart of the Clock. This is a lesson Julie learns, she must fill her freedom with something meaningful in order to go on living. Freedom is not worth striving for. We run away from freedom, as soon as we get there.

The ending is very ambiguous, she accepts the love of Oliver, but is still crying. Does the love he can give not measure up to her dead husband’s affection? Or perhaps she is crying of happiness now, and Oliver has given her the guide to go on living? Actress Juliette Binoche comments on the dvd that the smile at the end of the film is very important, a liberation and the start of a new life for Julie.

Blue is my second favourite of the Three Colors trilogy, I'll review White next week!