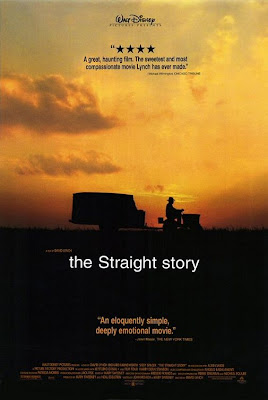 Deceptively straightforward (no pun intended) story about old man Alvin Straight, who travels on a lawn mower to visit his brother. He’s a stubborn old timer who refuses to listen to his doctor, he does his own thing. Along with The Elephant Man, I think this is probably Lynch's most tender and tear-inducing movie.

Lynch quoted from the book, The Complete Lynch:

“The Straight Story is an unusual film for me. But I was so moved by the screenplay that soon enough I found myself in Iowa. It doesn’t matter if the story is true or not. It’s a story. Everything is a story. This is a different world than I’ve been in, one in which nature plays a big part. And, although it appears to be calm, there are many things going on”

According to an interview done with Cousins for The Straight Story on youtube, Lynch thinks, in an ideal world, you should come to a film knowing nothing about it. In the opening, we float slowly into the story. In that interview, Lynch admits there is only one Alvin Straight, but that there are similar qualities to Lynch’s own father, being a cowboy with an inner strength coupled with an innocence and tenderness. Also discussed in the interview is how some people stay in the same town all their life, and Lynch compares The Straight Story to It’s A Wonderful Life, where Lynch thinks you don’t have to travel around to get a lot of experiences. Without giving too much away, one of the scenes has the camera moving up into the sky, and Lynch claims this is to show the small and the infinite, the stars are there for everybody, and they make you dream, Alvin Straight shared the stars with someone, and it’s a beautiful memory. The Elephant man (1980) also contained such a scene filming the stars. 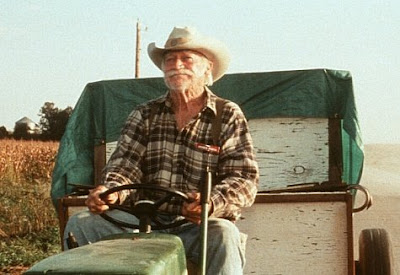 Actor Richard Farnsworth met many of the people who’s lives had been touched by Alvin Straight:
“He was very independent. He might not have had any money, but he didn’t want anyone to know about it. He was a very hard-headed old guy. I might have played him a little softer than he is” (The Complete Lynch, page 227)

Mary Sweeny talks about:
“it was really important to them to be emotional but not sentimental, which is really hard to do, and thank God David directed it, because our script could so easily have turned into a schmaltzy glossy Hallmark version of this guy’s life”

The snail’s pace editing gave time to show the simple pleasures of watching a breeze waft across a cornfield, or emotions play across a face. Similar in some respects to The Elephant Man, Lynch’s earlier true-life portrayal of a sensitive soul trapped in a failing body.

Both The Straight Story and Lynch’s Wild at heart (1990) are road movies, albeit moving at vastly different speeds. Perhaps the story of Alvin Straight allowed Lynch to quietly oppose the often mindless speed of so much contemporary cinema, or even the world we live in. When you drive slowly through the US, it gives you the opportunity to meet some people from the different cities on the way, something road movies tend to strive towards.

What about Alvin Straights many encounters with people in the movie? Were they based on actual meetings?
Lynch: “A lot of them were and some were not” (...) “In my mind, Alvin could have travelled in much easier ways but these would not have meant the same to his brother. His journey to me was about forgiveness and making something right” (Lynch on Lynch)

A life-affirming story, I love parts of the music score by Angelo Badalamenti, the pacing, and some of the quotes that we hear are very memorable to me. I think my favourite scene is when Alvin talks about how a bunch of sticks, as opposed to just a single stick, are strong and unbreakable, like family.

Readers, any thoughts on The Straight Story?
Posted by Chris at Monday, July 11, 2011