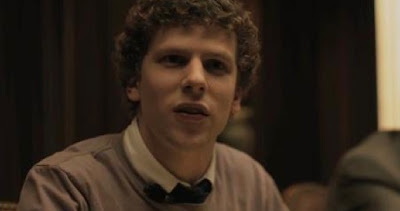 No spoilers in my review. I think this being among the most anticipated releases of 2010 says a lot about what a weak year it’s been in theaters. Fincher’s film definitely is visually stylish, which you would expect, he doesn't hold back with his trademark darkness and greenish colours. And it’s certainly a film that lingers in my mind the next day, as I’m writing this review. But if this had been a strong year, say like 1999, I don't think this film would win many awards.

Its very much a “zeitgeist” movie trying to capture the times, and of course, it’s trying to appeal to the 500 million facebook users all over the world, much like Fincher attempted to latch onto the 90s generation with Fight Club (1999). I’m not sure people without a facebook account would care to watch The Social Network. And perhaps older people I think would struggle to identify with the youthful cast.

I thought the film gave a good depiction of the power of money and desire for recognition, but maybe it repeated this too many times, and I thought I had got the point after a while regarding the athlete’s feelings.

I’d have preferred that the film instead had focused more on the pros and cons of facebook itself. What is friendship? What does it do to you to have a bunch of so-called friends online? Has facebook changed the way we perceive the term friend, and if so, in a good or a bad way? And so on, and so on. The movie does this a little bit, facebook founder Mark Zuckerberg’s girlfriend issues for example, but we never really get to know why he cares about her in the first place, which I see as a flaw.

Seriousfilm on the other hand likes the fact that "Fincher and Sorkin nimbly avoid getting bogged down in the minutiae of Facebook, instead aiming their story squarely at timeless themes of loyalty, power, class, wealth, temptation, and genius". I guess if that is what you wanted to see, then it’s a great movie.

Its been brought to my attention that the filmmakers took liberties for instance with the relationship aspects and doctored this to make us care more about Zuckerberg the movie character than Zuckerberg the real life person. So don’t expect the story to follow 100% the true life story of the events.

The soundtrack is good, mixing a suitably fast-paced electronic score, and a song about Zuckerberg's alienation:

The story is well-directed by Fincher, told with suspense, and with many flashbacks, but it didn’t make me want to discuss the film afterwards in the same way Fight Club did. The social network in my opinion didn’t leave many things to interpret other than the final scene. To be honest, I didn’t really care who had been disloyal to whom, which is also left unsaid. 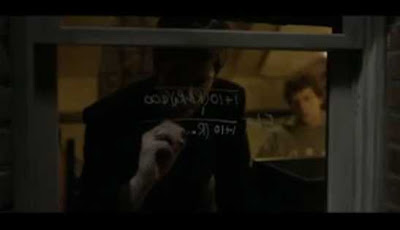 I guess the factual story about the founders of facebook could easily have been a documentary (and may already have been so). I’m still wondering why they elected to make it as a movie, and I think money is the motivation. So in that way the filmmakers mirror the movies characters. Maybe Fincher could relate to the notion of a man divided between money and friendship, and wanting to be recognized for his talent? What is more important for an artist, creating something important, or nurturing your friends? This is one of the few questions the film raises I found quite interesting. As seriousfilm puts it: “the film asks if you have to be an asshole to get great things done or if doing great things is just a convenient excuse for someone who was an asshole already”.

Don’t get me wrong, I enjoyed being along for the ride, it moves at a fast pace, so I was never bored, and it’s good entertainment. But the film is too commercial and devoid of risk-taking to be truly groundbreaking. It’s too eager to please a wide audience, and unfortunately, however impressive and dense some reviewers are saying the script is, dare I say it, to me at least, it’s essentially a dumbed-down movie, which is a pity.

I hope one day I’ll get to see something which delves more into the psychology of facebook, and less into the legal battle of its ownership. Really, why should we care which of these dudes owns facebook? It’s a credit to what a good director Fincher is, that he actually makes us give a damn.

A captivating story, better than your average film. I think Fincher succeeded in what he tried to achieve with this film, but unfortunately it was something else about facebook, I was looking for. 7.5/10

Reviews by others from LAMB

Facebook Co-Founder Speaks Publicly, What I Learned From Watching “The Social Network”
Posted by Chris at Friday, October 29, 2010