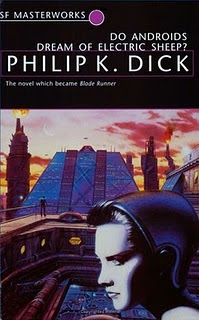 I usually prefer sci-fi on film, but I was impressed by this novel, full of ideas, and it still holds up well today despite being written in the 1960s. Love the title of this book. I’d be interested to know of other novels where the title is a question? "What was she thinking? : notes on a scandal" is one book. Here are more.

The film Blade runner is loosely based on this novel. The book is more thoughtful and the film more visually atmospheric, so they compliment each other very well. The stories differ quite a lot, the book includes scenes with Deckard’s wife Iran and their pets. The ending to the film I think is more exhilarating. In the book, I am not sure I was entirely convinced that people in the future would want goats and sheep as pets, I can understand why they left this out of the film. The only motivation being real animals are sought after due to them being status symbols. The electric animals are lower down on the prestige chart. A weakness in both film and book: why does Deckard hunt the replicants, if they are going to die within a few years anyway?

Although there are discrete references to e.g. George Orwell’s 1984, it’s still a very original book. Amazing that an author can create such a future world from scratch. Everyone is under suspicion for being an android. Rick Deckard is a bounty hunter assigned to kill several Nexus-6 model androids, who have murdered there masters on Mars. An empathy test — the Voight-Kampff — is used to distinguish humans from androids. Another reviewer raises an interesting question: Wouldn't it be so much easier to just make all androids so they have an easily distinguishable feature to show they aren't a normal human? 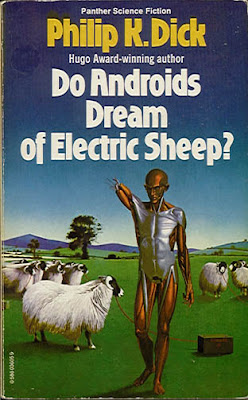 I think this book works on many different levels. A lot is going on between the lines. It’s a science fiction adventure, but it’s also a dystopian warning saying we should look after the environment. It’s about how the drug industry is dangerous and can control your feelings. Furthermore, it’s a cautionary tale about how we should go about cloning and act towards our creations. The story is also about what it does to the protagonist Deckard that he is assigned to kill androids. Philip K Dick has stated the story is about what makes us human. Having a friend who suffers from autism, I felt the androids are described in an almost autistic way having little or no empathy towards others, this is less visible in the film. But this could just be a prejudice attitude among Deckard and his colleagues, we can’t be sure. The author PKD on page 90 tries to defend this lack of empathy by stating Deckard’s wife sometimes has even less empathy than androids.

It can be very difficult to determine if someone is an android in Philip K. Dick’s world, likewise it can be difficult to know straightaway if someone is mentally disadvantaged. It is widely known that a number of mentally disadvantaged people see themselves as aliens, try and pass themselves off as normal individuals, and on occasion are not even aware of suffering from a mental condition. In the book, several comments are made that the androids are attempting to blend in to society and pretending to be ordinary people. I may be wrong, but this allegorical interpretation I think suggests Philip K Dick himself was autistic (many artists are), or had knowledge of people with this condition. The androids lack many human qualities, but that's in part because they are manufactured that way. Is it their fault that they lack empathy? The androids could represent any given oppressed group throughout human history.

To me, it’s difficult to know exactly what PKD was attempting to say, as the story is open-ended. I feel the novel has taken on a life of its own based on countless reviews and articles over the years which interpret the story in various ways.
I guess the message to me is we should treat androids with equal respect and give them the same rights as humans, and not treat them as slaves, if one day the technology should allow them to be created artificially. Androids in the book have feelings and desires too. The story depicts how humans are as ruthless as robots by their willingness to kill robots. I think the author probably asks more questions than he answers, which I see as a good thing. We the readers are left to ponder these ethical questions ourselves.

Do Androids Dream of Electric Sheep? is in “1001 books you must read before you die”

Also, check my recommendations of Blade Runner and Frankenstein, which are related.
Posted by Chris at Tuesday, October 12, 2010