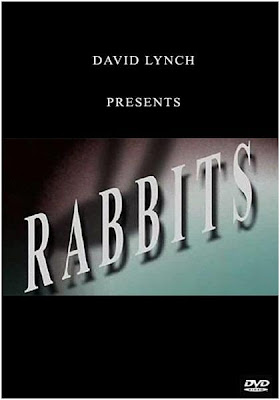 Rabbits is directed by David Lynch, and may be the best Lynch movie you have never heard of. A must-see for fans of Lynch. Rabbits is comprised of 9 instalments totalling about 50 minutes, and is a companion piece to his latest underrated movie Inland Empire (2006), as some of the scenes are similar, but it can easily be watched independently of that film. It feels like he was experimenting with this type of filmmaking before using it in that full-length movie.

A word of warning, it could be difficult to obtain a copy of this film from regular shops like amazon. It was released as part of an expensive lime green box set in 2008, but was originally a series shown exclusively on DavidLynch.com. You might be able to find it on YouTube if you’re lucky.
The story is about a group of three talking rabbits in a room. Very mysterious and ambiguous, we never see what’s outside the room, so it’s difficult to make any clear-cut interpretations. Is it all a dream, and if so who’s dream? Is one of the rabbits humming the music from the red room scene in Twin Peaks?, and is this a clue to solving the mystery? The male rabbit says we should remember what he says, why?
What about the demon, who appears twice, the words are spoken in a foreign language, maybe a language not even known to man? Is the demon a representation of evil, an evil we cannot understand?
Is it an alternative or fictional reality? The male rabbit several times leaves the room and when he reappears we hear canned laughter. Only a few seconds have passed for us the viewers, but how long has he been away in the rabbit world? 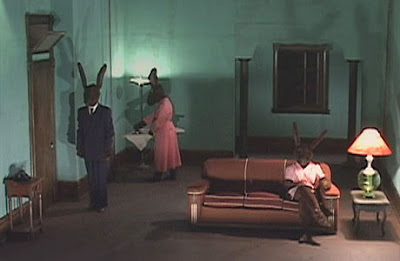 Is Lynch mocking the TV-sitcoms and its phony laughing like Oliver Stone did in Natural born killers? The laughter seems inappropriate, as if this audience is laughing at the wrong time and have misunderstood the dialogue.

The bunnies talk in riddles, they don’t seem to be communicating with each other, is this Lynch’s failure to write a decent script, or more likely, an example of character’s not listening to each other but selfishly rambling on without paying attention to the others answers?

If you want to further discuss or understand the abstractness of this piece, I suggest you visit the IMDB message board for this title.

A fascinating, abstract, frustrating, creepy and unforgettable experience, but at the same time there’s no denying a typical David Lynch atmosphere. The music, costumes, shadows and lighting all add up to a unique world. It’s amazing that an almost plotless story can be so intriguing, but it really is! This is a piece of film not easily categorized other than saying it’s made by an auteur.

What makes it even more interesting is how it refers to Lynch’s other work like Mulholland Dr. and like I said Inland Empire. I guess you can draw certain comparisons to non-Lynch films Harvey (1950) and Donnie Darko (2001) as well.