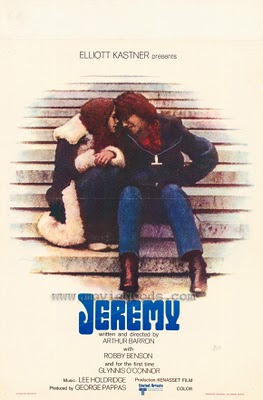 Once in a while you come across a movie you’ve never heard of before, which has a heart and soul, the relationships feel genuine, and some good music, Jeremy is such a film about first love.

I would call Cameron Crowe’s 'Say anything' among the best teen romances on screen of the 80s. 'The sure thing', also with John Cusack, to me another highlight in that category.

If you are able to see beyond Jeremy’s somewhat ludicrous 70s hair cut, and thick-rimmed and geeky spectacles, Jeremy (1973) is in my opinion a gem, a ‘70s Say Anything’, if you will.

My favourite part of the film is the intro, which features the song Blue Balloon (The Hourglass song) - by Robby Benson. I like how the opening draws you into the main characters predicament:

You don’t have to be a teenager to appreciate it, I watched it like a nostalgic trip back to my youth, and what it felt like to be in these kind of situations.

I don’t think they did a very good job with the poster on IMDB at all, the two main characters come across as creepy ! So I went with an alternative poster in my review.

I thought the first half of the film was stronger than the last half. Jeremy is a warm-hearted coming-of-age film more people should discover, only 303 people have rated it on IMDB!