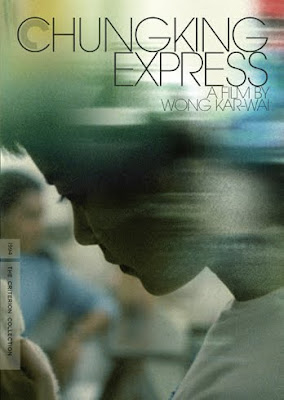 Some people call this Wong Kar Wai's masterpiece. Having seen quite a few of his films, I think this is probably my favourite directed by him. The script and characters are interesting here, I think.

Apparently, this film was originally in three parts, and the third part was put into Wong Kar Wai's film Fallen angels (1995) instead.

Som have criticized 'Chungking Express' for being essentially two films in one. The two stories are similar, and I agree with other reviewers it might have been more interesting, if there was some connection. Maybe there is, who knows.

I liked the second half of the film better, as you really get to know the man and woman on an intimate and emotional level, and really care about them. 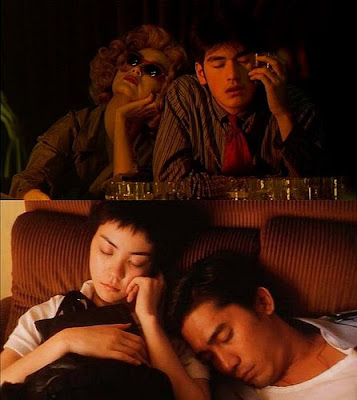 Wong Kar Wai's films are quite similar and this is another about people with broken hearts and having trouble moving on. Some bar scenes, violence, product placement and train stations have been thrown in like in some of his other movies. Some people call this his unique style, others think it's a little tiresome to see the same story rehashed over and over. I think his style is unique, as his films have a new angle on these themes.

I liked the cover song of The Cranberries 'Dreams' sung in Cantonese. California dreamin' is also a perfect choice, and will probably forever be associated with this film. I thought the music score at the beginning is quite similar to music in director Darren Aronofsky's movies such as 'Requiem for a dream' or 'The Fountain'.

It just goes to show that you don't need to have a huge budget to make a good film with likable people.

A very memorable film, mostly due to characters and music. I agree with another reviewer, who says the characters all have a charm and individuality about them.

Not sure that the title is very accurate, though. The Hong Kong title is Chung Hing sam lam. It's one of Quentin Tarantino's favourite films, watch him in this video talk about his love for the film.