Films of the month: April 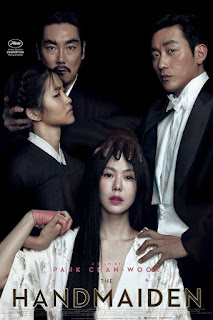 The Handmaiden (2016) (Chan-wook Park)
Directed by talented filmmaker Chan-wook Park and inspired by Sarah Waters‘ Victorian Era crime novel Fingersmith. The Handmaiden is a stylishly shot Korean 1930s re-imagining. Deserves praise for the beautiful costumes, lighting, production design and cinematography. But if I’m honest, it’s style over substance. A film about love and cold-blooded deception. Memorable sex scenes for the way they are shot, and one of the best twists mid-movie in recent memory, but the story is very long and at times confusing. The non-linear time line makes more sense towards the end.
SPOILERY: Though there is condemnation of perversion in the library scene, you could argue the film is voyeuristic fluff and designed to titillate in the same way as one of Kouzuki’s dirty books. It’s conceivable what Hideko experienced resulted in a hatred of men, making women more desirable to her. Or maybe she was a lesbian to begin with, who knows.
7/10 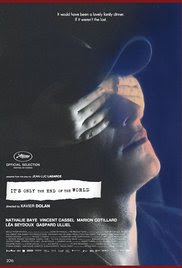 It's Only the End of the World (2016) (Xavier Dolan)
Winner of the Grand Prix at Cannes. Family drama, adapted by Dolan from a play by Jean-Luc Lagarce. I was sceptical because of the mixed reviews, the low expectations actually are a blessing, and it’s not Dolan’s worst film.
I love the music video flourishes and use of colors. Held my interest throughout. The character dynamics are intriguing. Antoine’s (Vincent Cassel) hostility and bullying is inappropriate, clearly he has been allowed to get away with this behavior for too long with no consequences. The only excuse he has is the hot weather is driving him nuts. Perhaps the parenting was too soft and his close-ones not firm enough. You kind of understand why Louis got the hell out of Dodge 12 years ago if Antoine was so insufferable. Yet you can also see it from the family’s point of view that Louis has shunned them for years.
Like a Hemingway short story, there are things unsaid beneath the surface, which you can question. Why for instance are Antoine’s and Catherine’s children not at the social gathering? Where is Martine’s husband? Why would Catherine marry such a jerk?
Favorite quote: ”What if I don’t only have words to answer? What if I have words to say”
7.5/10 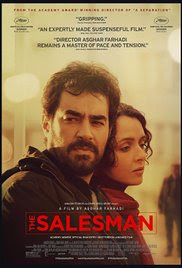 The Salesman (2016) (Asghar Farhadi)
Winne of the Oscar for Best Foreign language film. Reminiscent of a play. The wife made things difficult for her husband. She didn’t want to report the crime which then made him look neglectful. The neighbour justifies why she kept it from the police as the neighbour predicted the court case would lead to more suffering. The fact the intrusion is never fully revealed adds to the intrigue, and the details become extra important as clues.
I confess I am a little out of my depth in regards to the Death of a Salesman references, those scenes with the husband and wife enacting the play went over my head. Knowing your Arthur Miller may deepen the experience.
I didn’t particularly like any of the main characters, but their predicament was interesting to observe. The visit by the small boy at the hour mark seemed like needless padding, maybe to give some warmth to a rather humourless story. Probably could have been cut by 20 minutes. Sporadically powerful, especially in the last third, and a film I could easily rewatch. In the same vein as A Separation and The Past, with the focus on intense conflict on a domestic scale.
7/10 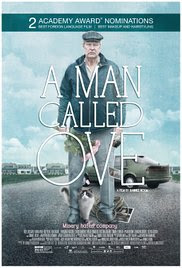 A Man Called Ove (2015) (Hannes Holm)
Swedish drama/comedy. Nominated for foreign language film this year. There was the occasional amusing moment, for example when he visits the neighbour Rune, and berates the cat for walking on private property. But a lot of the deadpan humor didn’t appeal to me, maybe better to watch together with a packed audience. The wife and neighbours are sweet, albeit too good to be true. The film is mainly about grumpiness, nostalgia and the need to change, giving simplistic reasons for his bitterness. Lacks depth. For a comedy, it's too long.
6/10 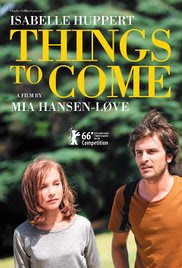 Things to Come (2016) (Mia Hansen-Løve)
Overpraised French drama with Isabelle Huppert playing a philosophy teacher who faces marital issues and looks after her elderly mother. Well-acted and realistic, but I wouldn’t label it best of the year. The story is rather forgettable and minor. The film doesn’t do anything unique or unconventional and for me fails to stand out from the pack. Although if I had to highlight a favorite scene, the acting by Huppert in the bus was remarkable to watch.
Quote: “I look on all sides and see only darkness everywhere. Nature presents to me nothing but doubt and concern. If I saw nothing there which revealed a divinity, I would come to a negative conclusion. If I saw everywhere the signs of a creator, I would remain peacefully in faith”
4/10 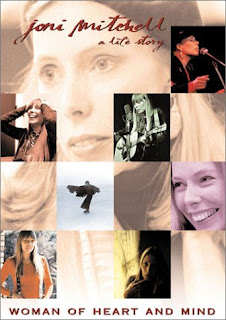 Joni Mitchell: Woman of Heart and Mind (documentary) (2003) (Susan Lacy)
A career retrospective. Began as a solo sing-songwriter. Mitchell was self-taught, with a unique vocal, and a talent for personal, vulnerable song writing. She would go on to experiment with new sounds on her subsequent albums, altering her vocal delivery, and collaborating with rock and jazz musicians.
Her relationships with musician Graham Nash and drummer John Guerin inspired a number of songs. Joni Mitchell was also a painter and many of her album sleeves reveal her art. You can look at them at this site.
She wrote a song about Woodstock, which many identified with, although she didn’t actually attend, watching the event on TV.
An ongoing conflict in her life is wanting to settle down and longing for love, while desiring independence and following her muse, her art. Also looks at her untidy relationship with her daughter.
7/10 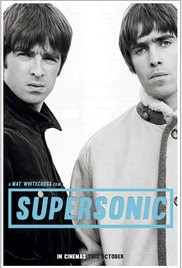 Supersonic (2016) (documentary) (Mat Whitecross)
You cannot mention the band Oasis without mentioning Britpop. I’m aware of their hits, but don’t own the albums. Oasis were a pre-internet zeitgeist sensation who reached millions, with their first two albums hailed as modern classics. The Gallagher brothers are depicted as attention-seeking, volatile, arrogant troublemakers, who don’t care how they are perceived. As people, potty-mouthed and anything but gentlemanly, but quite entertaining to follow at a distance. With an attitude, good looks, and a handful of anthemic songs, the group managed to tap into the mid 90s music scene.
If anything, they seem authentic in their lyrics and bad behaviour, although it’s hard to know what is jokey and serious with the duo, and the documentary doesn’t make me any wiser if their attitude is a performance for the cameras. Rather congratulatory, although the film does try and delve into the brothers' family history and reasons to why they are angry. There is the occasional look at the origin of a song, but you have to search elsewhere for an in-depth analysis of their music. The doc focuses on the career peak 1994-96, showing the rise from obscurity, how band members handled fame, but doesn't address the rivalries with other Britpop bands, which was dealt with in the 2003 Britpop documentary Live Forever.
6/10 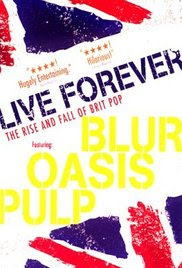 Live Forever: The Rise and Fall of Brit Pop (documentary) (2003) (John Dower)
I decided to give a watch as Pitchfork are celebrating Britpop this March. Landmark moments are included in the documentary such as big songs and important albums, but needed to be longer to dig deeper. There's an emphasis on the hardship of the Thatcher 80s, which fuelled the rise of lad rock. Also touches on the impact of New Labour and how that was linked to Britpop. Jarvis Cocker admits he had dreamed of making it, but fame is "shite" because he can't go out without getting noticed. Delves into the rivalry between Oasis and Blur, although both are very cagey regarding the singles released on the same day. I could have done without the remarks of the Oasis tribute band.
6/10 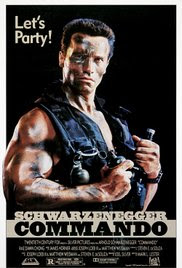 Commando (1985) (Mark L. Lester)
Not as original as Arnie’s other 80s work, but entertaining, quotable, and with non-stop action. Especially the opening hour surprises with its action sequences involving a plane, an airline stewardess, car chases. and the police, while the final 30 min is weaker and too formulaic for the genre.
7.5/10

What do you think? As always, comments are welcome
Posted by Chris at Monday, May 01, 2017