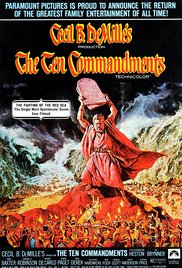 Along with Planet of the Apes and Ben Hur, The Ten Commandments features arguably Charton Heston’s most iconic performance. Cecil B. DeMille is known for making epics, and this is generally considered his best work. In this extravagant big budget retelling, Heston plays Moses from he is a young man and his journey to help his people. At the time of its release in 1956, it was the most expensive film made.
I knew the mythical story but had forgotten how it all fits together, so it was a reminder of The Book of Exodus. They take liberties with the original text for the sake of pacing and coherence. Yul Brynner has second billing as Rameses, and was convincing in the role. Anne Baxter does solid work as the love interest Nefretiri, she is given plenty of screen time and is perhaps the most ambiguous of the main characters, having interests on both sides.

In the introduction, we are told:
“The theme of this picture is whether man should be ruled by Gods law or by the whims of a dictator like Rameses. Are men the property of the state or are they free souls under God. This same battle continues throughout the world today”

Nowadays, the Moses story can be viewed as allegory rather than fact. It has strong messages about self-sacrifice for the purpose of change, how you should never give up in the face of adversity, and that oppression of slaves is wrong. Another lesson is you shouldn’t try and be above the Gods, because there are forces bigger than man.
What I’m less enthusiastic about, is how the Old Testament showcases God’s violence to achieve peace, and intolerance to those who oppose God’s will, for example when the earth opens up and the sinful fall away, while the men who follow God’s Commandments survive. This aspect feels dated, that God is disapproving and you were punished if you were an atheist or had another God. “Those who will not live by the law, shall die by the law!” The Commandments should be guidelines, and God ought to allow man to follow his own path and learn from his own mistakes.
I prefer the teachings in The New Testament, with the tale of Jesus, who can withstand anything, even death, and who is a symbol of love, no matter what. To forgive instead of to condemn.
It’s interesting whether the Moses story is predetermined or if the characters have free will. Perhaps God is so powerful that he already knows every twist and turn.
In the film, the miracles display Gods power, although the voice of God is unintentionally funny, and much of the dialogue in the film is quite pretentious and a product of its time. In most films this type of grandiose dialogue would fall flat but here it feels justified because of the biblical proportions. I was entertained, the special effects are impressive for the 1950s, so overall I think DeMille's vision holds up well as blockbuster filmmaking and as spectacle. It’s long at 3 hours 40 min, with an intermission.